I recently came across this presentation and from the onset, I got the impression that Chris Rowe was talking about an event that will make investors a lot of money; a Wall Street tech boom like the one that happened in the late nineties.

After watching the presentation, I put together this article to highlight the main talking points in case you haven’t gone through it.

What Are Chris Rowe Predictions?

In the header of the presentation, Chris claims that the last time there was a tech boom (which we learn he is talking about the DotCom Bubble), he made more than a million dollars in a few months before the inevitable stock market crash.

He says that the new tech boom will create more millionaires than any other stock market event in history. Whilst his track record is good, that does seem like a bold claim, so let’s see what he’s talking about and whether the market analysis he is doing is worth taking a look at. 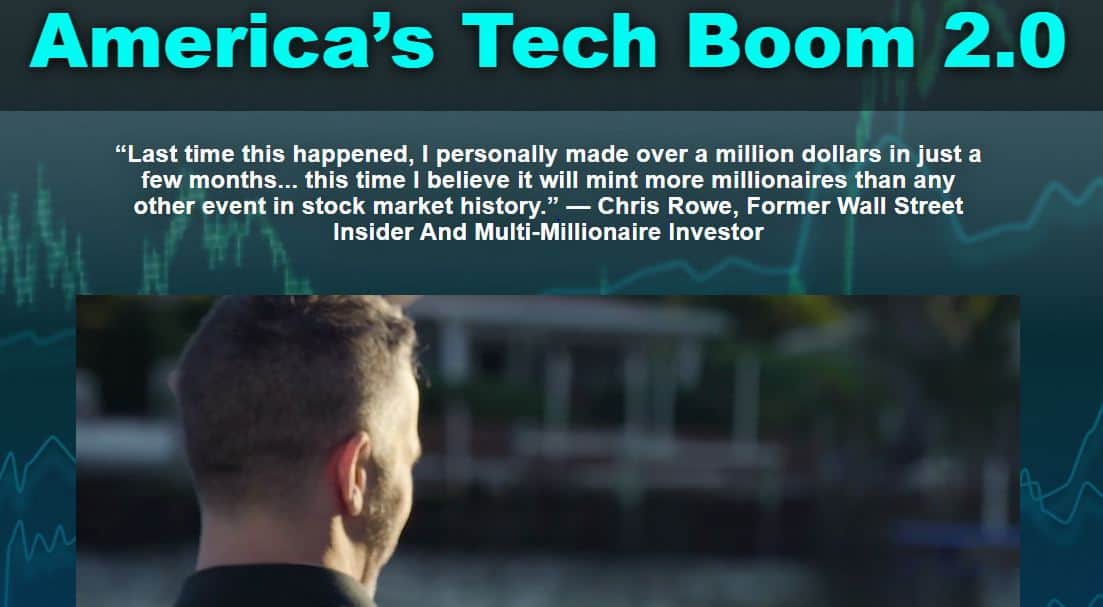 He believes that it will be triggered by the convergence of three separate triggers. They are:

Chris has his pick of investments to take advantage of it.

How to benefit from Chris Rowe predictions

Chris’ market analysis has found three tiny companies that he thinks will do well in investor portfolios during the tech boom. But before we get to them, he has another pick he shares with his audience in the pitch.

It is an ETF called Invesco QQQ.

It is a fund that tracks the Nasdaq 100 index, which is dominated by some of the biggest tech companies in the world. For example, all the FAANG stocks are in there.

He is recommending it because it allows you to passively invest in those big tech companies without having to spend the large amounts of money you’d have to without the ETF.

Moving onto the three tiny companies he is teasing:

He didn’t share much else about these companies in the presentation, which makes sense because he wants you to read his special report called  3 Tiny Stocks Set to Soar from America’s Tech Boom 2.0.

He is only giving away free copies of the report to new members of his newsletter called Sector Focus.

Who is Chris Rowe?

Chris Rowe is a renowned tech investment veteran and the chief investment officer and co founder of Tycoon Publishing. While he was at Tycoon Publishing, he ran a trading service that helped investors to pick and follow a successful “hybrid” stocks/options trading strategy. Chris is a regular contributor to the Tycoon Report.

He later decided to start another firm called True Market Insiders, where he is the CEO.

Chris has been in finance since 1995 and has held executive positions over the years at some high-profile firms.

He contributes to a free e-letter and publishes articles at InvestorPlace.

How Sector Focus (the newsletter) works

The pitch promoted a newsletter called Sector Focus (review here). If you join the advisory service, you receive:

In addition to 3 Tiny Stocks Set to Soar from America’s Tech Boom 2.0, you also receive two additional exclusive reports for free. They are:

Subscription Plans: A one-year subscription fee to Sector Focus will cost you $79. It has a 60-day money-back guarantee.

Chris Rowe is a legitimate investment market analyst who is a regular contributor at InvestorPlace (an e-letter called InvestorPlace Insights). In this presentation, he predicts that there will be a tech boom that will rival the Dot Com Boom and ambitious as it sounds, it is not far-fetched.

The rise of technologies like Augmented Reality, IoT, AI, autonomous vehicles, and robotics, just to mention a few, means that the world of Wall Street technology stocks is exciting. Besides, the technology sector dominates the stock market.

That being said, you should also be open to the possibility that Chris is wrong in his assessment although his presentation and research service is legit.

In the aftermath of a market crash that was caused by the Coronavirus pandemic, the market started rallying aggressively led by tech companies. There were sharp rises in market cap for some of the big players as well as some companies like Zoom (ZM) that provided vital services to people in lockdown.

It was with this backdrop that Chis decided to release his presentation about America’s Tech Boom 2.0 in which he floated the idea that the market may explode, driven by tech stocks. He argued that aided by new innovation, a larger number of investors, and stimulus money, tech stocks would run with it like the late nineties.

To some extent, it is true because tech stocks are likely to be the best performing group of stocks in the foreseeable future. However, that doesn’t guarantee that his picks will provide you with stock market wealth.

That being said the stock market events taking place seem to be following his predictions and whilst stock market history often repeats itself, we are really in new territory right now so it’s hard to say what will happen, there is no doubt though that the fed will continue to print and that money will find its way back to wall street and specifically the technology sector.