Are you a person wondering if Commission Robot is actually something worth spending money on or if it is just another way to gain your money and give you loss?

The Commission Robot is a package that guarantees the user will be able to gain most commissions through its offered software and video training.

The package is claimed to help its users get the best profits and commissions through just the click of a single button.

However, is such a claim really likely to be trustable? That is what I have found out in my review below, read on for the full scoop.

Commission Robot is a package that is offered to the users to help increase their commissions by a greater speed through the software that is offered in this package as well as video training.

These videos help the user learn how to make simple stores that they can then use to sell their own products and gain the maximum benefit.

The products are mainly based on helping others, such as fitness products, as well as relationship-based products.

When it comes to products claiming they can make you easy commissions you should also avoid Profit Point Autonomy and Home Cashflow Shortcut. 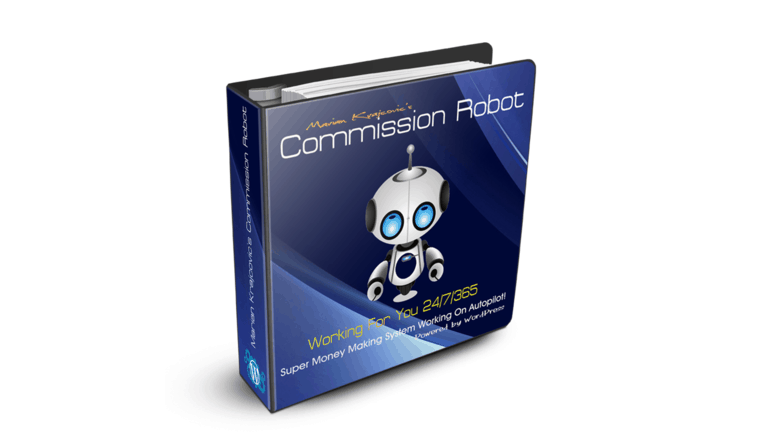 This means that the user can focus on the people’s needs as well as focusing on how to gain their own income.

Since these niches have already been picked out, it is very easy for the users to focus on their own products and produce good quality products that will inevitably bring them lots of success in the selling world.

The software helps the user to actually make the stores without any sort of problem in between, and it helps them to create an area that can be considered highly attractive to everyone that views their store.

This whole procedure is claimed to be extremely easy, and this is why many people say that it is highly attractive to them.

How Does Commission Robot Work?

Commission Robot has many features that are claimed to make the software and videos the best in the world.

One of these features is that this package has been claimed to be a new invention that will change the marketing life forever since it has been made by marketers for marketers. The users will have to put in the minimum amount of effort, which means that it can help them stay relaxed while earning money.

The software itself claims to help the user by making the websites for them and also bringing traffic to said websites.

Another feature is that this package is operated online, which means that the user does not have to go through the extra trouble of downloading any files.

The only thing required for this is an internet connection, which has become increasingly available in the last few years.

The package has also been claimed to be extremely easy to use, which means that the user does not require any beforehand experience just to use this process.

The package is also based around the traffic that comes from some of the most popular social media, so it is very easy for people to gain some traffic through the click of a single button that claims that it will help the user gain instant traffic.

The software is one that claims to do everything itself for the user. This means that the user does not have to put in any effort; the only thing that they have to do is start the whole process.

This also means that it is claimed to be one of the biggest marketing investments that anyone can ever make as it does not require the user for any kind of extra effort, and they can gain an income without even focusing their full attention on this software.

Who Is Behind Commission Robot?

Commission Robot has been created by Billy Darr, who has been known as a very famous individual in the online marketing niche.

He has been recognized as one of the most famous marketing experts due to his claimed many years of working online and as a software developer.

He has created many products online to help out his followers, some of which are Push Button Traffic, Profit Jack, Secret Traffic Goldmine, Commission Snatch, and Tube Passive Profits.

All of his products have been highly appreciated by everyone in the world and have been hyped up extremely.

He has created Commission Robot to help people that enjoy his work gain an even better income and focus on other jobs while earning a solid income online.

This means that he has made a very easy way for people to focus on their own work rather than spend time on a job that would not even benefit them in the slightest.

Commission Robot is on the borderline of being considered a scam, although this cannot be confirmed yet.

This is because while the whole process claims to be set to help people, it is mainly focused around the benefit that it can bring the creator and not the user.

The software is claimed to be extremely easy, which can make it harder to believe that such a complicated process is easy.

The whole procedure seems as if it is a little too unbelievable, which can mean that the process has some major flaws that are not talked about.

The software is claimed to be extremely easy to use.

The software can help its users gain quicker traffic.

The process is very sketchy and cannot be trusted.

The process is not very well explained.

Overall I think Commission Robot is yet another typical product making bold claims of income which will in reality never happen.

I’ve reviewed 100’s of similar systems and I know what works and what doesn’t which is why I would not recommend this.