Wondering what this Filthy Lazy (filthylazy.com) website is all about?

I’ve been taking a closer look to find out more about Filthy Lazy and now I’m sharing my honest opinion to help you understand more about this system.

If you’re tired of scam websites and want a real solution for making money online check out my no.1 recommendation below. It’s personally helped me build a 6-figure income online and in the last 6 months alone I’ve generated $140k:

So what is Filthy Lazy all about and can this website really help you generate an income? The reason I’ve put together this review is because I recently came across this website that claims it can help you make $100’s and even $1,000’s per month from home, but after going through the information I discovered that in reality the website doesn’t really offer anything at all and in actual fact it’s just a portal that redirects you to other websites so I wanted to put this review together and explain what it means for you. 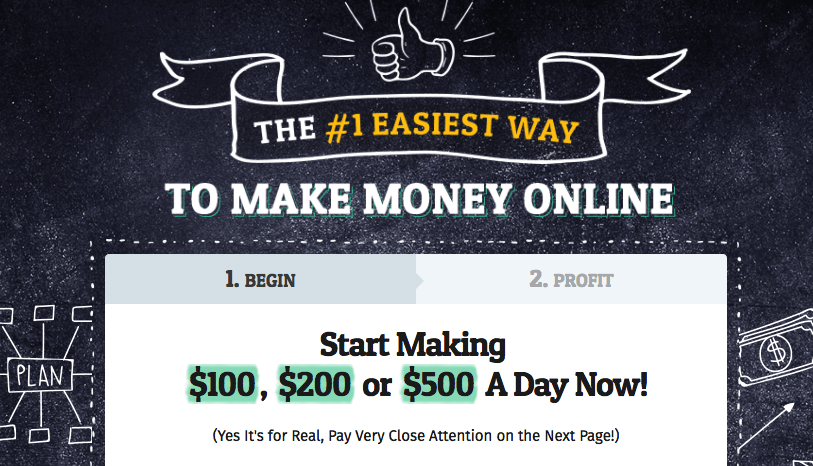 Here is what the home page of the website looks like and it says that you can make $100, $200 or $500 a day now. And it also states that it’s the #1 easiest way to make money which is funny because FilthyLazy.com is not actually a method of making money all as I will explain below.

After I started to sign up I found myself being redirected to a bunch of different websites all basically claiming the same thing that I could earn money. So what on earth is happening here and why is the Filthy Lazy website redirected me to all these different websites that claim I can make a fortune.

Well at first I will admit that I was a little confused.

I was sat thinking why are these websites popping up, lots of them claiming I can make this money?

And which is the #1 easiest way? It’s very confusing to say the least.

But I noticed on one of these links that popped up the website was from a guy called Igor who I instantly recognised.

Who On Earth Is Igor?

Once I saw Igor appear on the Filthy Lazy website I knew that I was dealing with one of Igor’s solo ads website. Igor is a guy who basically helps people who are involved in the make money online niche to get website traffic. He never really discloses how he gets this traffic but people who understand internet marketing like myself understand how he does it and what I realised with the Filthy Lazy website was that I had landed on one of Igor’s campaigns where he helps other people get traffic.

The kind of people that Igor helps are involved in home businesses and often MLM schemes like MOBE and Aspire Today. They need traffic to help grow their business so they go to Igor who sells them traffic. He actually is known as a “solo ad guy” which is a specific type of traffic that people get however I know from what I have seen now that Igor is actually using some weird techniques and also getting his traffic from affiliate networks.

I won’t go into the details because ultimately you probably don’t know, or even care about this, but let me explain why this affects you and Filthy Lazy and ultimately why I wouldn’t recommend this if you are looking to get started making money.

So What Is Filthy Lazy?

So as I mentioned the guy called Igor helps people to get traffic and basically he setup his FilthyLazy.com website to act as a bridge between himself (as the traffic provider) and a bunch of his clients who are all involved in the make money niche. Noticed how Igor’s website Filthy Lazy stats you can make $100’s a day and it’s the #1 easiest way to make money. This is there to pre-sell you into believing that the systems being offered on the next page will help you make lots of money since they are make money systems that are often being promoted as these are the kind of clients that Igor services.

Now this is a little misleading because to be quite honest Igor is redirecting you to a bunch of different offers and business opportunities that have mixed results, some of these are actually completely crap systems that I’ve tested already or even been involved with myself, and trust me they are not the #1 easiest way to make money, but the point here is that Filthy Lazy is not anything at all, it’s not a system, or a way to make money, it’s simply a bridge that redirects you to a bunch of business opportunities and if you sign up you won’t be signing up to FilthyLazy.com as it doesn’t even exist as a system, you’ll just get redirected to other business opportunities (good and bad ones).

Is Filthy Lazy A Scam?

It’s not a scam like what I am used to exposing. I regularly expose scams on this blog like entrepreneurjobs.club and extreme home paycheck and this is different because it’s not actually going to cost you money, well at least the Filthy Lazy website won’t cost you money, however you could end up joining a business opportunity that does cost you. Ultimately I feel that the website is a little misleading to you, because you sign up believing you can make money with it and then you just get pushed into a lot of different business opportunities and probably end up feeling confused as to why so many websites keep opening in your browser which is basically some special code used on the website to open lots of browsers so you sign up to more offers.

Is it a scam? Not really, but you could argue that it’s unethical. I’ll let you decide, personally I’m on the fence.

Do I Recommend It?

Since Filthy Lazy doesn’t actually offer any value I won’t be recommending it. Igor has clients in lots of business opportunities so to be honest you are playing roulette because you could sign up with a good one, but equally you could end up joining a bad one!

If you’re tired of scam websites and want a real solution for making money online check out my no.1 recommendation below. It’s personally helped me build a 6-figure income online and in the last 6 months alone I’ve generated $140k: