Interested in an honest review of the Lotto Dominator?

In this article, I am going to uncover every single detail about the Lotto Dominator, including whether it works or it is just a waste of time.

In case you have thought of trying it, read on as this Lotto Dominator review will help you make a decision.

Known as Lotto Dominator, it is a lotto winning method invented by the famous Richard Lustig. This is the person that has won the lottery, not ones or twice, but 7 times.

However, Richard believes that his lottery winnings are not because of sheer luck but as a result of a formula he invented for bagging the lottery. He claims that the formula is on his website even though the real question still remains to be, is the formula legit or just a scam.

The Lotto Doninator – What is it, what does it do, and how does it do it?

This is a lottery winning method launched by the legendary Richard Lustig, a man that has clinched the lottery 7 times and founded the website known as Lotto Dominator. The man argues that his winnings are not based on luck but on his lotto winning formula which has helped him in winning the lottery.

After successfully winning the lottery 7 times, Richard claims that he is willing to pass out the winning secret to other people so they can also apply it to win the lottery. But despite him being super rich, he is unwilling to give the secret free. To get the formula, you need to part with $49. 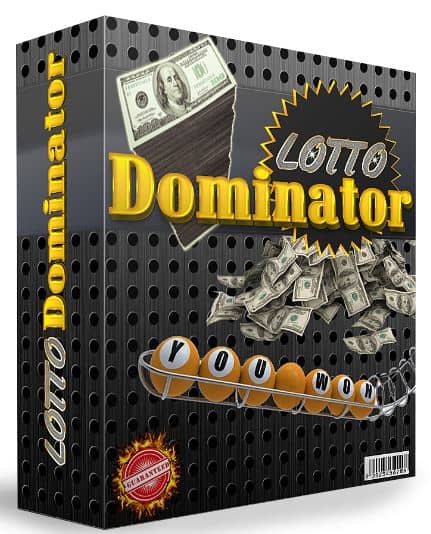 With this, Richard’s formula becomes a bit questionable. If really his method worked for him to win the lottery 7 times, why then start selling the formula for a little money if all he has to do is apply it to win another lottery?

The other thing that puts Richard’s formula to suspicion is that he keeps changing its name and facilitating its re-launch time after time. Several years back the so-called lotto winning method was known as the Lottery winning University, he changed its name and re-launched it as Lotto Crusher, now it is the Lotto Dominator.

Why the Constant Change of Names?

Frankly speaking, Richard keeps on changing his lotto winning method’s name to escape all plenty of negative reviews. Unfortunately, those who have tried the method end up complaining despite the founder’s claims that it is the next big thing.

Some comments about the method are completely outrageous. Majority reviews from the users ranked it between one and two stars. Here’s a sample of the reviews: 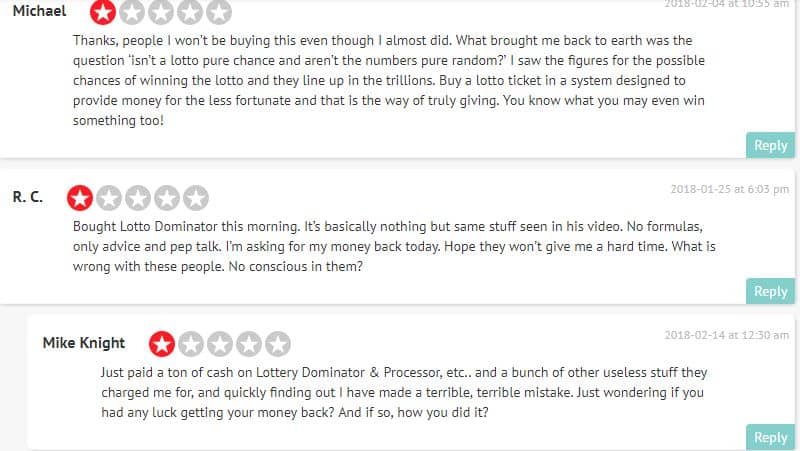 Nevertheless, let us continue evaluating whether the method is legit or a scam considering that Business Insider already warned people about such a program.

The Warning Signals with the Lotto Dominator

The most outstanding warning signal of all is the negative reviews from the people who tried the method. And to escape this, the owner keeps changing the name of the program to confuse more people.

Apart from that, the method is also associated with other more problems:

The first problem is that to get the Lotto winning Dominator you have to part with a fee in order for you to access it. This makes it look like the usual get-rich swindles we see every day which promises people instant money or fast millions, but after you give them your money, you realize that you have been ripped-off.

Another problem discovered about the program is that it can only be accessed on ClickBank. This is an affiliate platform where online marketers sell products and in return, they earn commissions. That is how Richard is selling his lotto winning method, paying the marketers for it and we all know how persuasive they can be.

So the big question remains, why are marketers being paid by Richard to promote the program on his behalf? Moreover, why are the marketers not applying the method themselves to win millions? Instead of wasting time by promoting a program for a smaller pay, why don’t they just go for bigger money by applying the program they are selling?

From this perspective, it is clear that the program is full of empty promises.

A lottery can only be just that, regardless of how you try to put it. The digits that win it are generated randomly and it is impossible for any formula to predict the outcome of the numbers. If it were possible to win through a formula, example like the Lotto Dominator then Richard would be winning at least ones a year. And I highly doubt he would be sharing this information with anyone, instead he’d be on a beach somewhere with 100’s of millions in his account.

The only sound explanation we can make to Richard’s winnings is that he either bought so many lottery tickets to increase his chances of winning, or he is just exceptionally lucky. Funny enough, he never tells us the number of tickets he plays to win. To me this is your typical get rich quick lottery scheme which sucks people in with promises of easy money but ultimately will never deliver. It preys on the newbie mindset of fast and easy riches online but the reality is that will never happen.

There’s a high likelihood that Richard could be in huge debts. And he figured that he could invent the program, and make easy money by selling to people. Sadly, people keep falling for it every time he re-launches due to the fact that he won the lottery 7 times without stopping to think whether it was luck or through a crazy lottery addiction.