Welcome to my Profit With Alex review.

Like many programs, Profit with Alex should be reviewed to determine whether it is an investment worth your time and money. One thing that comes out clearly is that scammers are less likely to recommend something legitimate. A quick look at the Profit with Alex video reveals a number of details.

If you’re tired of scams and want a legitimate way of making money check out my no.1 recommendation.

What is the Profit with Alex Software?

income working as an Amazon affiliate. Alex Goodwin, the narrator of the infomercial, gives the software free but the user has to part with $37 web-hosting fee, which includes a money back guarantee. Alex uses the video to demo the software and takes us through the software membership area. While the application appears legit and could help build Amazon websites, a couple of reasons could be standing in between users and the software.

What is Notable About the Software Presentation

Presentations that begin with the narrator attacking scammers and narrating sob stories while concealing his face tells you that you cannot expect much from their product offering. Instead, you can expect pure hype and baseless stories about minting money from the program. The presentation also revealed that Alex had shown his audience some fake bank account details and adulterated affiliate statistics. He begins by saying the method works in particular countries only. This is not new as several videos have narrated from the same script. What are evident in the video are lies and manipulation, as well as the software’s effectiveness. 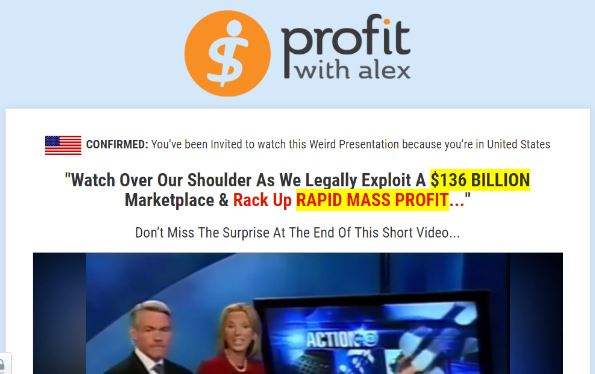 The Lies Peddled by Alex Goodwin

He alleges that the video is available via ‘invite only’ and for a limited period. However, this is generally untrue because it was uploaded in July 2017 and will continue to be available into the foreseeable future. Hosted on a limited-edition webpage of ProfitWithAlex.net rather than the Homepage, the page looks like it is a limited edition, and the homepage shows that the video is no longer available and that the product offering is currently closed. This is just a marketing strategy because the video is still available.

While it is possible for Alex Goodwin to have that kind of money in his bank account, the account uses Alex’s name, a fictional name that creates the possibility that the image has been adulterated. Therefore, the figures could also be doctored, and this could create a problem with the IRS.

Since he wants to impress his audience he uses attractive figures to demonstrate how much he has earned from the software, which he sets up, creates a site and allows it to run for seven days before returning to find that it has earned him more than $4,000 through an auto traffic generator integrated into the system. The traffic generator is made to sound so secretive that it is nearly impossible to believe that he generated those results from a new Amazon site set up about a week ago. 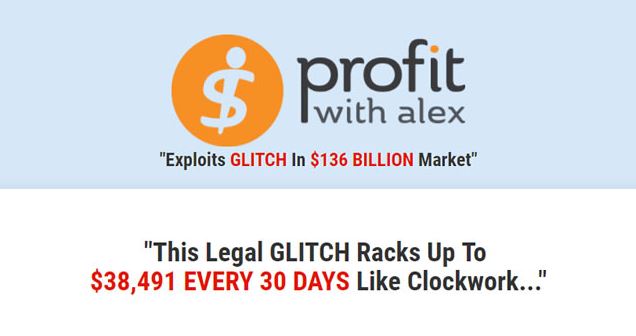 What makes it hard to believe is that sites require more than just plain products. Therefore, you are in for a rude shock if you believe that the software is great just because it can build a website and populated it with desired Amazon products. As you will come to realize, sites require you to go beyond products and reviews downloaded from Amazon if they are to generate any meaningful traffic that could convert into sales. The video shows that Profit With Alex is nothing more than another one of Amazon’s listings. It would not rank in Google and would not be of much use to the user. You would need to spend much on paid traffic to attract visitors and ultimately a commission.

It is doubtful you can carry your own domain and use it with such websites. If cannot do that then you have no use for this service. In addition, despite saying that the software is free, you are actually parting with $37 in hosting fees. This means you are indirectly paying for software, as hosting fee is non-refundable and web-hosting is an ongoing cost.

Not Recommending Profit With Alex!

The reason for this is that the software is not effective in building useful websites because products alone are not enough to attract site visitors. Therefore, while the product is not a scam, you are highly unlikely to make money with it. Initially we had high hopes for Profit With Alex and even shared the website in our newsletter but after hearing real reports from subscribers of ours including someone who’s Amazon account was closed due to using this product we certainly cannot recommend it.

If you’re tired of scams and want a legitimate way of making money check out my no.1 recommendation.