Before we jump into the review, if you’re tired of scams and want a real solution for making money check out my recommendation…

When I saw that this scam was still going strong I was a little surprised. The truth is the Affiliate Millionaire Club is nothing new, it’s been around for years, I guess the owners have tweaked it a little, but this scam has existed for a long time. After taking a closer look it’s clear to me that it hasn’t changed much, they’re offering you some BS money making system for the small fee of around $40 bucks, but is it really going to work? Not a chance and in my opinion it’s similar to other scams like My Millionaire Mentor and The Money Academy. 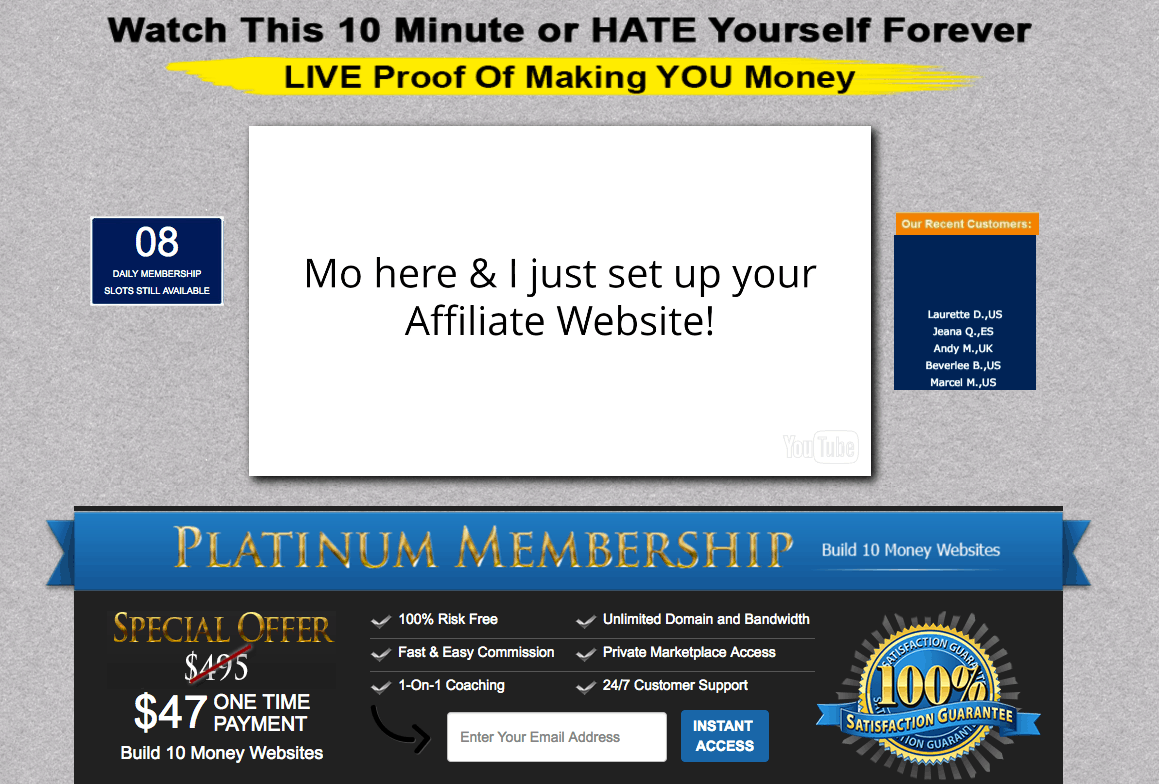 The Truth About Affiliate Millionaire Club

So who the heck is Mo? Is this the big guru behind this system? To be honest it was hard to find information about him, however there’s a few other systems where the creator is called Mo so perhaps he is the same guy? Either way it seems he’s not really there to help you. What he offers you with his Affiliate Millionaire Club is some BS system that won’t help you make money, and I suspect Mo is one of these “gurus” who makes money shiny objects instead of teaching genuine methods. In other words he sells get rich quick crap to you that doesn’t work and that’s how he makes all his money.

With the Affiliate Millionaire Club you are basically getting access to a software that will build you a website. The software technically does work and builds you a website however the whole concept is BS because these automated styles of websites don’t work, and nobody is going to buy products from them. Think about this logically, you came to my website for example for information about this product and now you are reading this genuine review which I have personally put together. If some robot created an automated piece of content here, do you think you’d still be reading this page? I highly doubt you would as it would probably be completely irrelevant information.

Another thing I noticed about the video is that it’s full of fake testimonials. Many of the people appearing on their website claiming to have made a fortune with the Affiliate Millionaire Club are actors from the website Fiverr. These people appear in many scams online, and the truth is they are probably broke, because let’s face it, who would sell fake testimonials for $5 unless you really needed money. They certainly are not making a fortune as most of them claim to be, and this is a huge red flag.

I noticed that the Affiliate Millionaire Club website uses a number of deceptive sales tactics which are often present on scam systems. They use things like fake customer feeds showing new customers who have joined however these are not real, however someone looking at this will probably think they are. They also use false scarcity too because they say that spots are limited when they are not. The truth is 100’s of affiliates promote this system and they are certainly not fighting over a few sales, the owner of this system will happily accept and unlimited amount of people because the more people that join the more income he makes.