Have you heard about Beijing’s Death Star?

But is there any truth to his claims? Can you follow his recommendations?

I sat through the presentation and researched the project before writing this review to give you an overview of what the military project entails. I also give my take on whether the recommendations are feasible.

Beijing’s Death Star is a presentation in which Jason Simpkins talks about a plan by the US military to develop a laser weapon to respond to a powerful laser weapon being developed by the Chinese in their quest to assume global military supremacy.

He claims that China is working on laser weapons that can be used to blow up American battleships, bring down aircraft, destroy satellites and cell phone towers, and puncture submarines. They may even be used to disrupt the power grid. 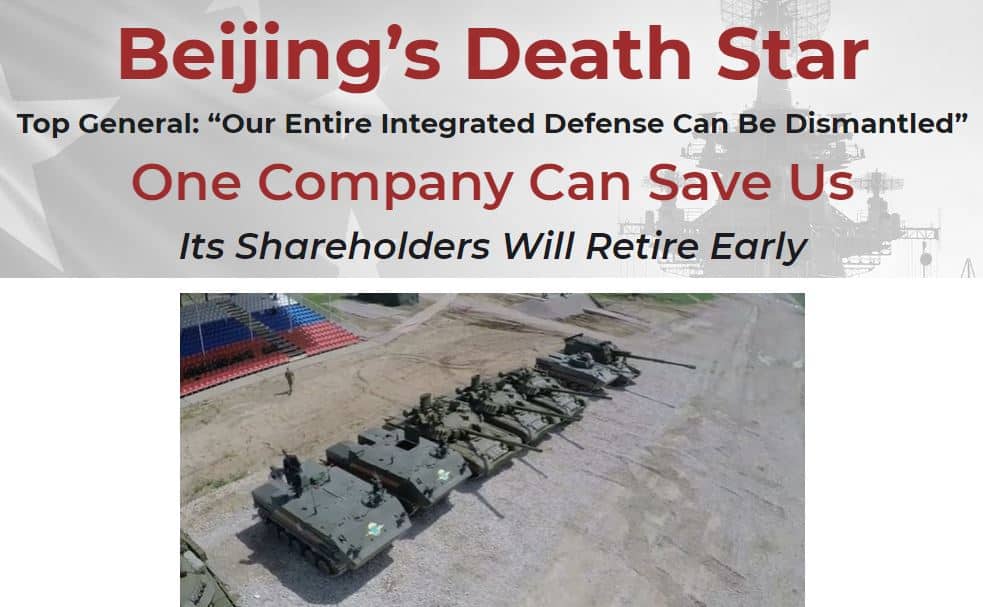 In the American laser system, the only thing that has been lacking has been a crystal diode. There is one company that manufactures this tiny component and it is the go-to vendor for America’s top defense contractors.

Jason believes that the company will create a massive profit opportunity for investors who get in on it early.

Who Is the Guru behind the “Beijing’s Death Star” Presentation?

Jason Simpkins is behind the presentation, as we’ve already established. He has spent his entire career predicting the rise of key profit trends. He publishes his advisory service via the Outsider Club.

He is constantly assessing the market, looking for new profit-making opportunities to share with the individual investors.

Jason predicted the prominence of cannabis and CBD oil as investments. He also encouraged investors to get in on the Lithium boom, considering that Lithium had a variety of defense applications, not to mention its use in the manufacture of electric car batteries.

He is usually looking for investment opportunities that involve the military. He refers to himself as a “wealth warrior” because he doesn’t shy away from investing in defense contractors that are engaged in various operations around the world.

Unsurprisingly, he is calling our attention to a game-changing technology that will benefit from military spending.

How Does Beijing’s Death Star Work?

As we covered in the introduction, Jason has earmarked one small company in the midst of all the hype about a laser weapon being developed by the US military.

This firm holds the key to the possibility of developing a weapon that can compete with China’s laser weapon.

The crystal diode that this firm produces is the answer to China’s Magic Crystals. The biggest defense contractors in the world like Lockheed Martin and Northrop Grumman have partnered with the company for its nonlinear laser crystals.

This project is benefiting from increased government spending, which has opened up the possibility for investors like you to take advantage of this opportunity and make profits.

You can reveal more details about this company in a report by Jason Simpkins titled The Laser Defense Firm That Will Let You Retire Early.

In this free report, you will disclose the name and ticker symbol of this laser defense firm. You will also find a financial report and a detailed explanation of how the laser technology works.

You will get the report for free if you subscribe to The Wealth Warrior newsletter service.

In addition to it, you will get two other free reports:

Beijing’s Death Star isn’t available for free! You have to pay for a subscription to the Wealth Warrior.

An article published by South China Morning Post, discussed the ambitious Chinese project aimed at making it possible for a satellite equipped with laser technology to detect submarines 500 meters below the surface. Although it doesn’t go into the technical details of the project, it shows that the project Jason is referring to, is actually taking place.

There isn’t much to write home about the American project because it probably hasn’t taken off. However, the government has been spending more on laser technology in the past few years. It may be or may not be unrelated to the project Jason is talking about, though.

Ultimately, there are indications that Jason is being truthful; therefore, we give this presentation the benefit of doubt.

Jason Simpkins did Beijing’s Death Star presentation to get you to subscribe to The Wealth Warrior advisory service. He even threw in three bonus reports to sweeten the deal.

But this doesn’t come as a surprise considering he is always in search of new profit-making opportunities.

If you buy into his investment strategy, you should give the Wealth Warrior a try. Fortunately, if it doesn’t suit your style after you have subscribed, you can ask for a refund.