Looking for a review of Bitcoins Wealth Club? (aka Bitcoin Wealth Club)

Today I’m taking a closer look at Bitcoins Wealth Club after receiving an invitation to join from a well known marketer.

If you’re sick of scams and want a real solution for making money online check out my no.1 recommendation below.

It’s personally helped me earn over $150k in the last 6 months alone:

So as I briefly mentioned above I’ve been invited to join Bitcoins Wealth Club from a well known internet marketer who’s email list I am subscribed to so today I decided to take a closer look to find out more about Bitcoins Wealth Club, see if it’s actually legit or whether it’s just another scam. Here’s what the website looks like: 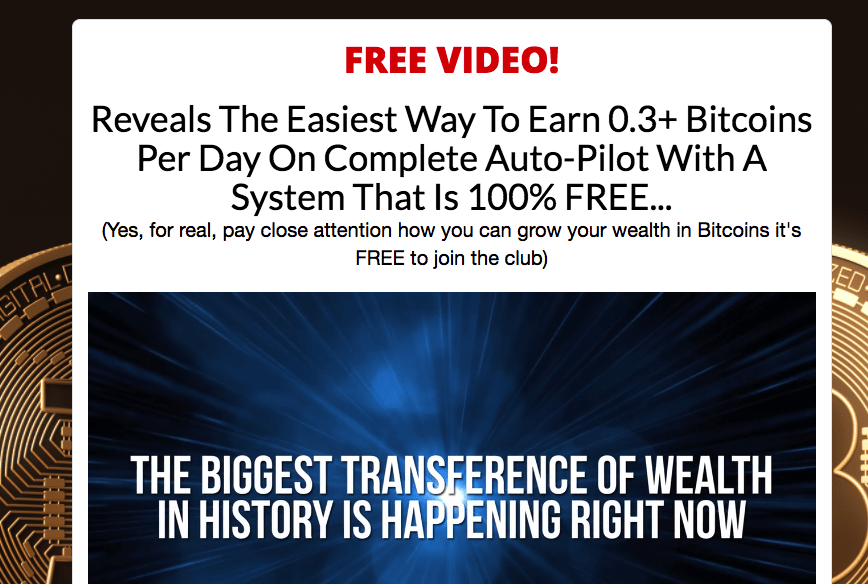 I noticed that the website looks pretty similar to other opportunities I have reviewed lately. Some examples I am thinking about are power mining pool and bitconnect as they are both opportunities for earning. They claim you can earn a lot of money by basically just signing up for free and buying some Bitcoin.

In my experience there are A LOT of scams in this space. I’ve noticed in just the past few months alone there have been dozens of these opportunities launch which appear very similar to ponzi schemes. They state about earning a guaranteed amount of money and all you need to do is invest Bitcoin, you don’t need to do anything else because they trade or mine and allow you to make money.

To me these claims are pretty bold to say the least but it’s difficult to ignore them when you get a recommendation to join from a marketer who you trust. Receiving this email about Bitcoins Wealth Club has actually confused me because to me this opportunity does look like it could be a ponzi scheme / scam however the recommendation I got came from an online marketer who I respect and have followed for many years.

How Does Bitcoins Wealth Club Work?

Bitcoins Wealth Club is a new opportunity that has been launched by someone who’s been in a few different opportunities over the past few years. To make money in this opportunity you need to invest Bitcoin but you can also earn more Bitcoin by becoming an affiliate of the program and recruiting other people who join.

Like I already mentioned there are a few opportunities like this that have already launched. It’s certainly something that is very hot right now in 2017 and Bitcoin and cryptocurrencies in general are only going to grow as we move into 2018 and beyond. I recently put together a couple of videos about this and shared them with my subscriber base.

Next year I predict the price of Bitcoin will hit $10,000 and I’ll personally be looking at making 5-figures per month by trading alt coins. I believe this to be possible however I won’t be getting involved in opportunities like Bitcoins Wealth Club because in my honest opinion I don’t trust them.

Obviously I am a little conflicted because I was invited to join by a marketer who I respect a lot and who is generally very trustworthy however that doesn’t mean that I actually trust Bitcoins Wealth Club. In my experience there are too many of these companies popping up and they are all jumping on this bandwagon.

This is what all the big marketers do and it’s the reason why they can be successful in any program while the newbie fails because they simply don’t have the skills to actually promote and recruit others into the opportunity. This is one of the reasons I have stopped being an affiliate of network marketing companies because the majority of them don’t properly train people on how to recruit and the only people who make the big bucks are people who can recruit properly.

That’s why my no.1 recommendation that you can see below teaches you real methods for making a full time income with affiliate marketing and has many success stories (I’ll share more details of it down below in case you’re interested).

That’s my personal opinion however I will say that I am positive that some people will make a lot of money in this opportunity but it’s probably going to be the people that can recruit a lot of people into it. I won’t be recommending it as I say, if you want to learn how to trade Bitcoin properly then learn how from free YouTube channels.

If you don’t care much about Bitcoin and just want a proven solution for making money check out my recommendation below which shares all the details.

If you’re sick of scams and want a real solution for making money online check out my no.1 recommendation below.

It’s personally helped me earn over $150k in the last 6 months alone: