Welcome to my review of Michael Robinson’s Cannabis Venture Syndicate.

Michael, a member of the National Institute of Cannabis Investors, has been talking about the company set to dominate the Vegas marijuana market and how you can get in on it for just $1 per share with the possibility of growing your stake many times over.

But is joining the Cannabis Venture Syndicate going to expose you to many other private deals as he promises it will?

In this review, we address that as well as go over what you receive as a subscriber to Michael’s new investment advisory service. Keep reading to learn more.

Cannabis Venture Syndicate is a new advisory service that is published by the National Institute of Cannabis Investors (NICI) and edited by Michael Robinson. It is designed to alert you to private cannabis companies that might make for good investments, starting with a Las Vegas-based company that he says is about to tap into a large market at the Strip.

I went into greater detail about that company in my review of his presentation regarding a $2.4 Billion Private Cannabis Deal a while back. Although he is still be talking about it, you can learn more about it from that article. 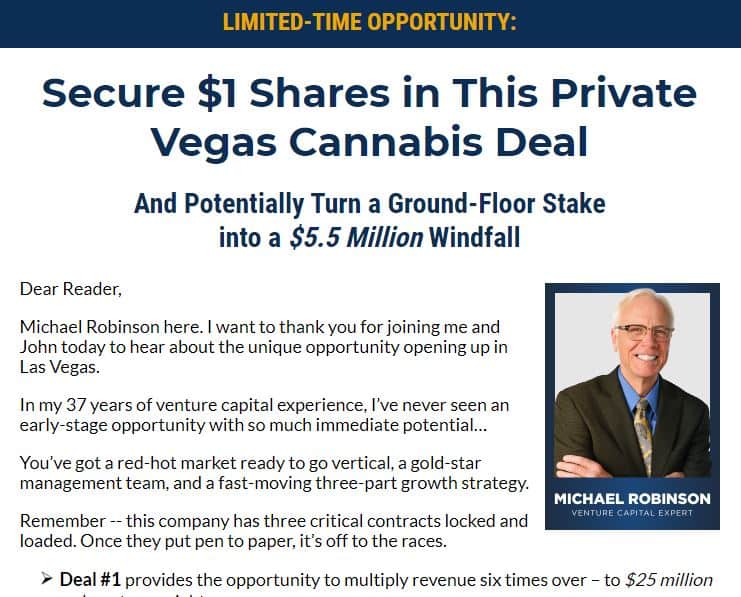 Just to recap what the company is all about (and why Robinson keeps touting it):

Who Is Behind Cannabis Venture Syndicate?

Michael Robinson is a tech investment expert with over 37 years of working in and around Silicon Valley. Unsurprisingly, a number of venture capital firms looking to break into the business have hired him to work for them as a senior advisor or consultant.

With a vast network of connections in Silicon Valley, you can think of him as an “insider.” He regularly appears on CNBC and Fox Business as a commentator for this reason.

He has been a Pulitzer award nominee and has published a book about a potential financial crisis. It is titled Overdrawn: The Bailout of American Savings.

He is a member of NICI, which has ties to Money Map Press and as a member, he analyzes the market to find out breakthrough cannabis investment opportunities.

What you get when you subscribe to the Cannabis Venture Syndicate?

If you would like to learn more about the private company, you have to subscribe to Cannabis Venture Syndicate.

As soon as you subscribe, you will gain access to a dossier going into greater detail about the Vegas company. You will also receive a Video Pitch Deck that shares details such as the name of the company, its strategic growth plan, and its proprietary production process.

What’s more, you will receive an in-Depth Due Diligence Package that shares more information about the three deals that are expected to propel it. This includes details about the new acquisition (the new resort) and how this will enable the company to be a dominant force in the Vegas market.

Third, you will have access to the Deal Memo, which is a to-the-point summary of the entire cannabis deal.

You will also receive a Terms Sheet that highlights the key parameters of this cannabis deal, including how many shares are available for $1, its current valuation, and how long you have to claim your stake.

Every 60 days, Michael promises to send you at least one private cannabis deal worth looking into.

Lastly, you will receive an investing primer containing what Michael considers the 12 best-kept secrets of angel investing.

Michael makes some ambitious estimations about the possibility of you earning millions by following his advice. Therefore, it is understandable if you feel that there is something “off” about his statements.

However, you can’t take away from the fact that private deals can be some of the most rewarding investments, albeit with higher levels of risk. So, you shouldn’t be alarmed by some of his projections, just take them with a grain of salt.

Don’t go into it expecting to make millions because there is so much that can go wrong to scuttle the private deal.

The cannabis industry has been in the limelight for a while, especially since States started legalizing marijuana for medical or recreational use. The Farm Bill, which legalized hemp, also helped stoke the fires a bit (but you should not confuse Hemp with cannabis because they are different).

All in all, public pot stocks have continued to offer investors the opportunity to earn large returns for those that have made wise investments. But, undeniably, the market has been quite volatile and you generally need to have a high risk tolerance to do well long-term.

Michael Robinson’s Cannabis Venture Syndicate goes a different route in the sense that it focuses on private pot companies. These are different because while the profit potential is great, there is less transparency because these companies are not obliged to reveal their financial information like public companies.

If you join Cannabis Venture Syndicate, you will be hoping that Michael and his analysts have done the due diligence and they have your best interests, which for subscription fee you have to pay, has to be a priority.