Looking for a review of Davor Coin?

Wondering whether Davorcoin is just another ponzi scheme scam?

I’ve been taking a closer look, and now I’m sharing my honest review giving you all the details.

So what’s the latest davorcoin news? When I first heard about Davor Coin my first thought was, “when will people learn?”. I see people flooding into this new coin called DavorCoin (website Davor.io) which has a new lending platform where you can earn money but I’m wondering why people haven’t already learned from the mistakes that have already happened.

BitConnect was the biggest lending program in the cryptocurrency space and USI Tech wasn’t far behind.

I use the term “lending program” lightly since the more appropriate term is ponzi scheme.

Both these companies were hit with cease and desists from the state of Texas and after that things just got worse and worse.

USI Tech was first to announce that they were closing US operations.

And then a week later BitConnect shuts down their “lending program” completely.

When this happened the price of the BCC (BitConnect Coin) dropped from over $400 to less than $19 at one point.

They were also in the process of launching BitConnect X in ICO which is their new exchange. They claim that this ICO is still going ahead but I’d be amazed if anyone has any confidence at all in their operation since they have clearly been exposed as a ponzi scheme.

USI Tech did not actually have a tradable cryptocurrency coin but were in the process of launching Tech Coin via ICO. This is still going ahead to non-US/Canada investors but clearly will not do anywhere near as well as it probably could have done.

Whilst all this is going on, I see more and more people flooding towards Davor Coin.

In fact an advert on Google Adwords even states that “Davor Coin is rising faster than BitConnect” which isn’t exactly hard given what’s happened.

What Is Davor Coin All About?

So in this review I wanted to first express my concern about DavorCoin and the fact that it looks incredible similar to other schemes that have recently collapsed. In my honest opinion I don’t have confidence that DavorCoin will be any different in the long run, but that should be obvious given this review so far.

Now let’s actually look into what Davorcoin is, what they claim they are offering and learn more about it.

DavorCoin states on their website that by investing in their coin you can be part of one of the most ambitious cryptocurrency projects.

On the face of things their website looks pretty legitimate. They are tradable on an exchange called CoinExchange and at the time of writing this post the price per DAV is $91.19 according to the popular website CoinMarketCap.com – Their own website has a slightly different figure and claims a 24/hour volume of $3.6 million. This is very different to what the Coin Market Cap website states which is a mere $189,000.

I can’t honestly say which figure is correct but it’s worrying that both of these are such different figures. 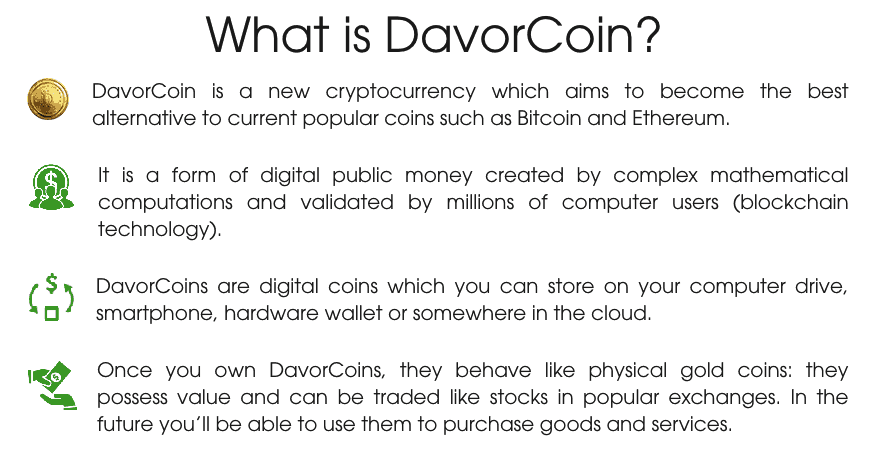 Davor Coin aims to become the best alternative to BitCoin and Ethereum.

In case you are brand new to cryptocurrency the two biggest cryptocurrencies are BitCoin and Ethereum as they have the largest market caps.

It’s interesting that DavorCoin wants to be a competitor to Ethereum because I read through their White Paper on their website and it has no similarities to Ethereum and it has no mention of smart contracts which is basically Ethereums main advantage over Bitcoin and is why many ICO’s are launched off Ethereum.

I won’t get into the details of what this means because if you are new to the cryptocurrency space it will probably confuse you but just know this, DavorCoin is in no way whatsoever a potential competitor to Ethereum.

I just read through the White Paper for Davor Coin and I was very surprised.

I’ll admit that it’s quite a long page however it’s still 1 page.

The White Paper is supposed to explain in detail what the cryptocurrency offers. It’s essentially a prospectus for potential investors and a key selling point too. It’s supposed to give potential investors all the details about the new coin covering every single aspect of how it works and what their core purpose is. Most White Papers are 30-40 pages long at a minimum, and some are even 100+ pages yet the DavorCoin White Paper is just 1 page.

I started off my review mentioning BitConnect which recently closed it’s lending program down and is basically a huge ponzi scheme.

Well after looking at the DavorCoin website I am convinced that this coin is nothing more than a complete clone of BitConnect.

Here is what I am talking about: 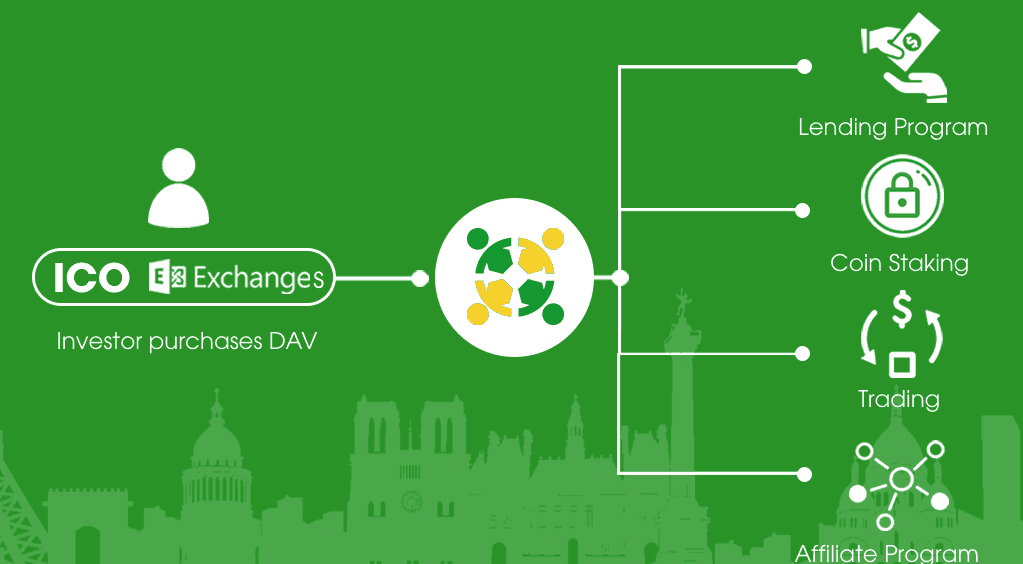 The image above taken from the DavorCoin website shows how their platform works.

The only difference is that DavorCoin isn’t talking about mining and instead has their affiliate program on. But apart from that it’s basically exactly the same concept.

Need more proof that DavorCoin is basically a clone of BitConnect?

Look at how their lending platform works and the amount of interest you earn plus the length of time to get your capital back:

And now check out the BitConnect lending:

I think I’ve said enough in this review.

The simple truth is that DavorCoin has seen the success of BitConnect and wanted to replicate it. However BitConnect has inevitably collapsed like all ponzi schemes do!

After taking a closer look at DavorCoin I am amazed at how similar it is to BitConnect which is an exposed ponzi scheme that recently closed it’s lending program down.

Chances are the BitConnect owners have probably run off with $1 billion or more of the Bitcoin that people invested into their lending program. I am confident that the exact same thing will likely happen with DavorCoin if it continues to grow. There is simply no way that a program can sustain itself paying 1% lending interest a day on investments.

DavorCoin is still in its infancy but I see more and more people flooding into this platform.

I would urge anyone joining to be extremely careful and be prepared to lose all the money you invest.