Can you really trust GetMyAds? Does this revenue share program really help you make money? I’ve been taking a closer look and I’m sharing my review below. To be honest I’m skeptical to say the least and I’ll explain exactly why in my review below, keep reading for all the details.

First things first, if you’re sick and tired of scams and want a real solution for making money check out my recommendation…

GetMyAds is a revenue share company that claims you can make a lot of money by just signing up and following their instructions. There website claims you can make easy money and to be honest it looks very professional. When I landed on their website I thought what a good looking website they had, however when I started to look closer I soon started to realise what a complete scam GetMyAds is. Surprised by that? You shouldn’t be, because revenue share models are destined to fail. Here are some claims they state: 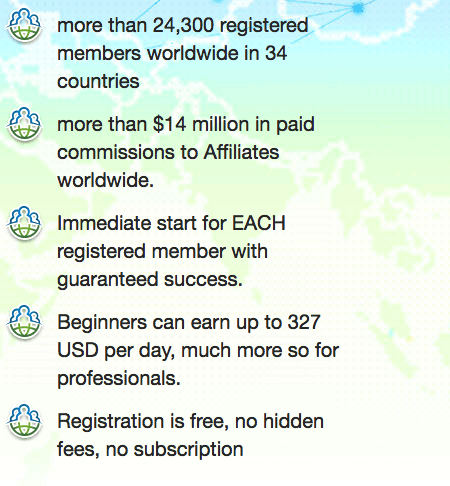 As you can see they boast having paid out of $14 million to commissions. And they say that you can earn $327 per day from the start. After looking at programs like this in the past I am convinced it’s a scam because of what has happened to other programs like The Advert Platform. The Advert Platform was a revenue share program that went by the name of My Advertising Pays. It grew over a couple of years into a business that had 100,000’s of members and millions of members money invested in their system. The goal was to buy “Ad packs” which would expire and pay out a profit, the more you got the more money you would make. You could also earn money referring others which is how most of the top players in the business got paid the big bucks as they earned a commission on everyone else who signed up.

The problem is that My Advertising Pays (now called The Advert Platform) collapsed. Everyone new it would happen sooner or later. They claim that their merchant ran off with $60 million of their money. However the merchant claims the opposite that they never ran off with the money and that they actually owe them money. It’s a mess and I don’t know the real facts behind what has happened however one thing I know is that this business model is flawed and it will collapse eventually.

It’s essentially a ponzi scheme, no much different to the many others out there. The only difference is they claim that it’s a legitimate advertising business, which is complete BS.

One thing that drew me towards GetMyAds is that many of the people who were involved with The Advert Platform (formerly My Advertising Pays) have now started to promote GetMyAds as affiliates. It’s clear that this is another ponzi scheme no different to the others they have been a part of in the past. The problem is that the affiliates rarely invest a lot of money into these programs, they know that they are scams and that they will collapse eventually so they don’t put their own money at risk. Instead they recruit other people who will invest, and then they earn % on what these customers invest into the program.

Some affiliates will claim that they were victims of what happened with the likes of My Advertising Pays however I think that is something very naive. I actually was an affiliate of My Advertising Pays however I stopped promoting it because I knew that it was not a good program and that it would fail eventually, so I urged my members to get their money out while they still could as their money would soon be gone.

And this is exactly what will happen with GetMyAds. It might not be in 2017, maybe not even in 2018, but sooner or later whether it’s a year or 5 years from now, this company will collapse, the owners will likely run off with your cash, and all the people who got involved with lose out. The only people who will make money are the affiliates who are professionals who can recruit people into any program they want without much effort. It’s the regular people who invest money into the program who will lose out.

Many people have literally lose their whole life savings in revenue share programs like My Advertising Pays. They can blame their merchant all they want, but ultimately this is a very flawed business model, and they were not allowed to operate in the USA, so clearly something is not quite right with it.

On the surface GetMyAds looks like a professional operation however when you actually understand how this business model works you understand how fundamentally flawed it is. It’s my personal opinion that GetMyAds is a scam, and sooner or later if you invest money you will only end up losing it.