Jarvis Formula is without a doubt a scam. I’ve been looking into this new software known as Jarvis Formula to find out the real truth about whether it can help the average person to start making money and now I’m ready to share my full review and expose it as a scam. Keep reading below if you wish to get all the details and learn the real truth.

Before I start – Go here to see my no.1 recommendation for making money online

After taking a closer look at the Jarvis Formula it’s clear to me that the scam artists behind this website have gone to great lengths to try and convince you that they have a legitimate system. They’ve really pushed the boat out with their website by hiring actors and even a private jet! It’s important to look past all that and look at the real facts to understand the truth about this system. Paul Jarvis is clearly a made up name and the person playing this character is just an actor as there is no such company called Jarvis Formula Incorporated. All the signs point to huge scam when it comes to the Jarvis Formula just like when I recently exposed The Cash Loophole and Profit Replicator App (2 big scams). 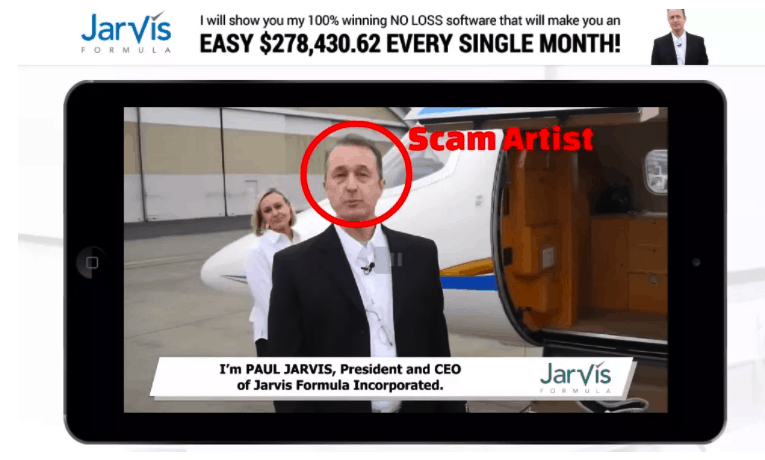 “Paul Jarvis” claims that his software works by scanning through the NASDAQ stock exchange and placing winning trades by creating the index average, whatever that means! The robot apparently scams the markets and sends signals back to the software to make trades. To be honest it’s clear to me that they are trying to make their system sound advanced and clever but in reality they are speaking pure BS and hoping you fall for it. Paul Jarvis also claims that he is well known throughout the financial industry yet when I looked into his background and his company I couldn’t find any information on them and also their website was only recently registered.

See my no.1 recommended system here

After looking closer at the Jarvis Formula website I noticed one of the testimonials from a person who has also given a testimonial for another system. This is a huge red flag as the system in question is a known scam, so clearly this is a fake testimonial! This is actually quite common practice amongst the scammer community. Yes believe it or not there is actually a community of people who operate these scams and each of them help one another to spread the word about a new scam. I guess you could call it an inner circle! All the people behind the scams are making a lot of money with some making far more than others, however non of them are traders. The real person behind the Jarvis Formula website (not this clown in the sales video) is not a trader but in fact has been behind many scam binary options systems like this one in the past.

Also the testimonials you see are always either stock images where the real people behind the images won’t even know they are being used or they hire actors to give testimonials. So the person saying that they made a fortune with the system is most likely broke, and probably got paid about $5 to give a quick testimonial yet they are claiming to have made a fortune. That’s why it always pays to do your research on systems like Jarvis Formula and get the real truth.

Over the past few years I’ve reviewed 100’s of money making opportunities and it’s easy for me to spot a scam. As soon as I landed on the Jarvis Formula website it was clear to me that this system was not legitimate. After conducting further research it’s really quite obvious that we are dealing with a scam here so I’m not recommending it. If you want to see what I do recommend for making money you should take a look below at the system I use.