Massive Online Paydays is a new money making system that recently launched but can you really trust it and can it really deliver you with “massive online paydays”? I’ve been checking it out and now I’m sharing all the details in my full review, keep reading to learn more.

The Massive Online Paydays website is full of bold claims. For example there’s a huge banner that lets you know you are guaranteed a $500 payday today. It’s claims that like that instantly scream scam to me but let me give this a chance before I judge it too quickly. 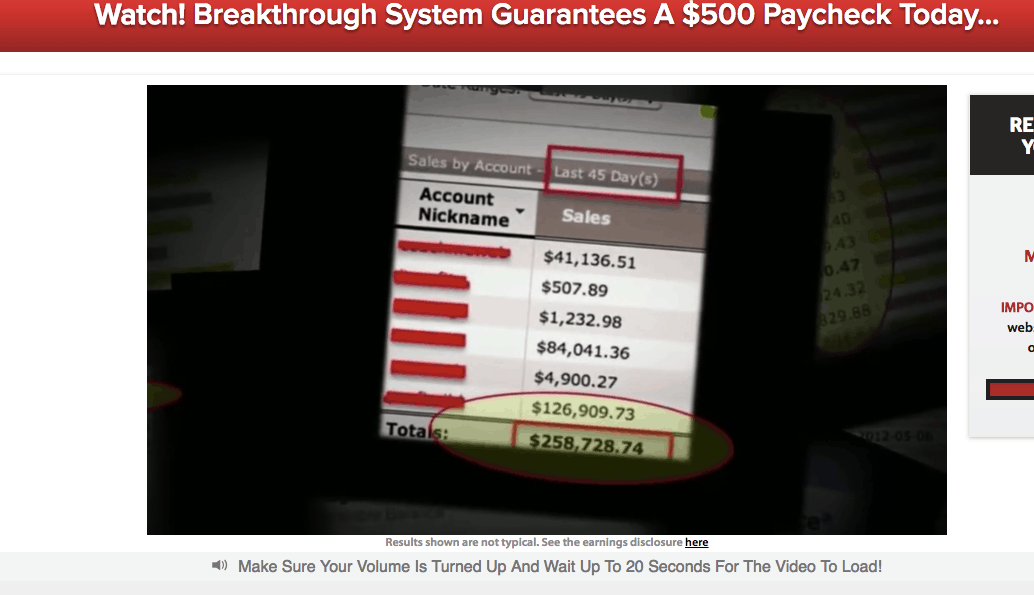 I have to say bold income claims and “proof” in the sales videos kinda annoys me. It’s things like that which are just trademark signs of a scam. Even when a system is genuine it makes itself appear like a scam by using these. It used to work a few years ago perhaps but now I don’t know about you but whenever I see these kind of bold claims about how much you can make, my first impression is that it’s a scam. I would much rather see some kind of free training teaching a genuine method for making money instead of pure hype.

After taking a closer look it became apparent to me that Massive Online Paydays is a system that promotes the Mobe business opportunity. It’s really no different to the likes of Online Profits Breakthrough or even Massive Internet Profits (similar name right?).

Mobe is a business opportunity started by an Australian guy called Matt Lloyd. Many people who sign up to this business opportunity become affiliates who get paid to refer new customers to Mobe and websites like Massive Online Paydays tend to be created by these affiliates. The problem I have with these kind of websites is that the majority of them flat out lie in order to sign you up with Mobe. I covered it in other reviews I have done exposing these websites but they basically are created by super affiliates of Mobe.

I’m not saying all of them are bad but a large chunk of them flat out lie about Mobe in order to sell you it. They talk about how much money you can easily make and how they guarantee you’ll make $500 today. It’s all a complete load of BS because whilst Mobe does have a $500 guarantee it’s impossible to make that the same day you sign up, and you have to literally spend $10,000’s for the guarantee to even come into effect.

The guarantee is basically that you follow Mobe’s 21 step system and if you implement everything they tell you and don’t make money they’ll give you $500. But it’s completely pointless because if you don’t make money you’ll have most likely already spent $10,000’s on all their products so what is it to them if they give you $500 in return for spending 5-figures? They already made a bunch of money from you anyway!

What Exactly Is Mobe?

Believe it or not I am not against Mobe and I think Matt Lloyd is a cool guy. I actually follow him on Snapchat and he’s done incredibly well to build Mobe into a huge business. The problem I have is with some affiliates who seem to be lying on their websites like Massive Online Paydays. I don’t know whether Matt is turning a blind eye to the activity of these affiliates or whether he even knows. My guess is that he knows but he thinks the ends justify the means. In other words his affiliates can lie to make sales because he feels that his company delivers solid products at the end.

Anyway getting back to Mobe, it’s a digital marketing company with an income opportunity. Their primary “goal” is to teach you how to do digital marketing but they recommend you go down the licensing route rather than typical low cost affiliate marketing. Matt Lloyd realised that most of the money made by the top earners online was selling high ticket items, so he created Mobe and filled it with expensive high ticket training products like all expense paid trips/training packages.

To make money with Mobe you have to buy the products and this allows you to resell them for a commission. When you drive traffic their sales guys also call up all your leads and sell them the products. The issue is that you have to become a product of the product. In other words you sign up and go through the sales process yourself to then sign people up and repeat the whole process. Some might argue it’s a pyramid scheme. That’s not my personal opinion but many people will inevitably think that.

In my opinion Massive Online Paydays lies to you in order to sell you Mobe. Do you really want to trust a system that lies to you? Personally I wouldn’t! I don’t believe that Mobe is a scam and as I say I’ve got great respect for Matt Lloyd but I won’t be recommending this system.