Welcome to my review of the New Era Fortunes Summit.

Ian King’s new webinar has been generating excitement over the past few days, so when I got an invitation to it, I decided to take a closer look to predict what he is most likely to discuss.

In the invite, he already hinted that it will be about investing in small-cap stocks that can go up by 10X in as little as 12 months.

If you would like to learn what I discovered about the summit, keep reading this honest review of the New Era Fortunes Summit for all the details.

The New Era Fortunes Summit by Ian King (and John Burke) is an online event during which he is set to reveal his new small-cap stock investment strategy.

From King’s previous presentations, (think The Great American Reset or Spectrum The Future Of All Technology) we can extrapolate some patterns that could help determine what he is likely to talk about during this most recent event. On top of that, he has been sharing clues (in addition to what he shares in the invite) as to what he is going to cover. 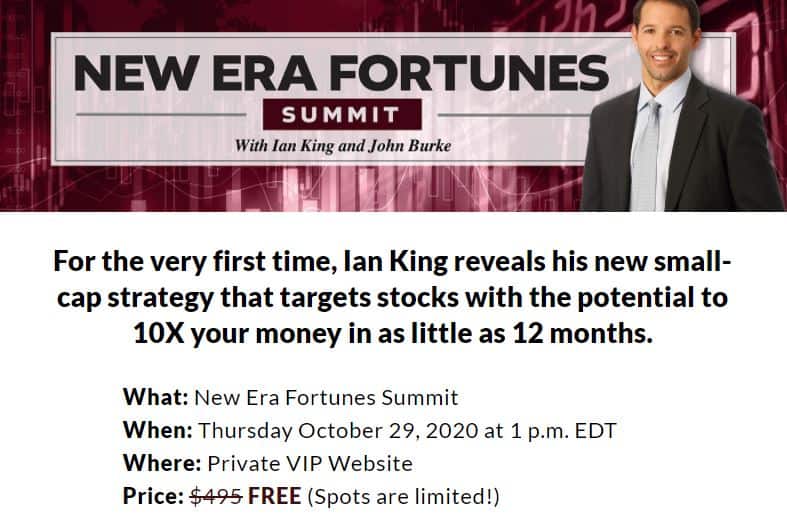 Although definitions can vary depending on who you ask, according to Ian, small-cap stocks typically have a market capitalization of between $300 million and $2 billion.

The event will be about:

King wants you to invest in small-cap stocks because he believes that they offer you better growth prospects and, consequently profit-making opportunity, than large-cap stocks. He says that his small-cap strategy will target stocks that have the potential to 10x your money within 12 months.

He will also probably focus more on 5G because he thinks it is the one that will unleash the new era. This is not the first time he is talking about it as an investment opportunity. You should check out his Fluorescent Sand presentation to see what I am talking about.

Who will host the New Era Fortunes Summit?

Although John Burke will be present, Ian King is the main man behind the New Era Fortunes Summit.

For a bit of background about Ian King, he is a former hedge fund manager and has worked for a few major firms Wall Street. He did relatively well considering that he earned his clients more than 261% in positive returns in 2008, while the Global Financial Crisis was in full throttle; it was a bad year for the economy and many industries and investors found themselves in the red.

What’s impressive is that amid the financial crisis, Ian King was able to offer his investors a 261% annual return.

On top of that, he has had a good record as an analyst and claims to have recommended that his followers invest in companies like Apple, Amazon, and Tesla that ultimately earned those who followed his advice more than 1,000% in returns.

He edits newsletters like Crypto Profit Trader and Automatic Fortunes that are published by Banyan Hill Publishing.

New Era Fortunes Summit will take place on Thursday, October 29, 2020 at 1 p.m. EDT. If you want to watch it live, you must book an invite beforehand to confirm your participation.

King claims that there is a limited number of seats available and, therefore, he recommends that you act fast. To reserve your seat, you should submit your full name, phone number, and email address after which you will receive updates concerning the summit via email.

The summit will be held on a private VIP website which I found out is simply newerafortunessummit.com. On there, you will find further details concerning the event.

Subscription Price: The summit has no subscription fee. You can join it for free even if you’ve never subscribed to any of Ian’s newsletters.

I think New Era Fortunes Summit is a legit event.

Ian King intends to talk about his unique investment strategy, which he believes can earn you significant gains on your investment. For example, he claims to have found a way of determining the small-cap stocks that can offer you a 10x return.

However, there are no guarantees that his investment strategy will work and you may lose money on his recommendations.

New Era Fortunes Summit is an event that will take place on October the 29th during which Ian King will reveal his investment strategy.

He will discuss the benefits of investing in tech companies that he expects to shine in the “new technological era.” He will also focus on three companies that he wants you to invest in to earn massive returns in as little as 12 months.

You can expect him to promote his newsletter, Automatic Fortunes, whose recommendations are based on his tech trading strategy.