Here’s another scam that you need to avoid. It’s called the Optical Signal Trader and it’s nothing but a nasty scam designed to steal your money. All the reviews you see saying how amazing it is are fake too. They are simply created by affiliates who want to try and sign you up to this scam so they can get paid a referral commissions! I’ll be revealing the truth so keep reading and get all the details.

Before I start, are you interested in learning how I make a 6-figure income online? Go here to see my no.1 recommendation which reveals the system I use.

So this scam claims you can make $3,000 a day for doing nothing. Yeah right, what a joke that is! Look you can make a lot of money online, but it’s not going to happen for doing nothing. I know people who make 6-figures per month online, but all of them work hard and implement proven systems. They don’t sit back and make a fortune for doing literally nothing, that’s a pipe dream and something you need to forget about if you actually want to make money. Optical Signal Trader is just preying on lazy people. I don’t want to offend you but ultimately it’s trying to say you can make a fortune by doing nothing, and it’s BS! The guys behind this system simply want you to sign up and make a deposit of $250 or more. They will tell you any old BS to get you to sign up. That’s why they tell you that you can do nothing and earn thousands per day. All you have to do is just “sign up and make a deposit”. These guys will also tell you that it’s “just a deposit” and you can withdraw that money any time you want. Oh no, that’s another BS lie. Anyone who has ever tried to withdraw money from a binary options broker knows how hard it is. They make it extremely difficult for you to withdraw your cash. They make it extremely EASY to take your money, but it’s near impossible to get money out. Also the software itself “Optical Signal Trader” is programmed to lose. Once you deposit $250 or more the software will activate and will start making trades for you. This is where most people sit back and think they are going to be rich, but in reality this is where the scam takes your money. The software will trade away your cash to nothing and then these guys will call you up and ask you to deposit more money. I’ve known of people who have lost their whole life savings in scams like this.

Over the past few years I have reviewed 100’s of these systems and they are all the same. Whilst the website and the sales video changes, the way the scam actually works has not changed in years. Other similar scams are push money app and the private profits club system. Both offer a “free software” and all you need to do is sign up and make a deposit. But when you actually do sign up and make a deposit their software will trade your money away to zero.

Another thing I noticed about the Optical Signal Trader which is also true with other scams is the use of fake endorsements/testimonials and actors.

Take a look at the image below and you’ll see what I’m talking about: 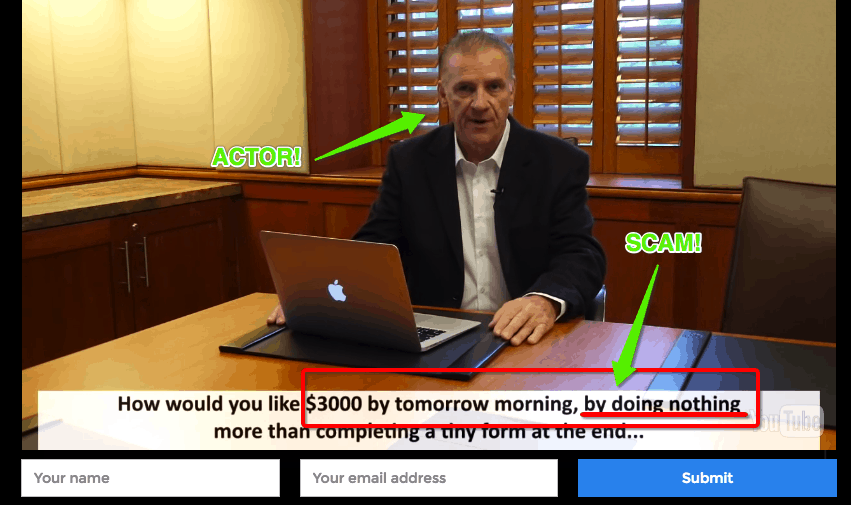 The guy you see in the sales video is not the owner of this system. He is just a hired actor! Genuine systems have real people on their sales page. The owners don’t hide behind actors who are just feeding you BS in order to sign you up. This guy on the video is probably some failed actor who has to take scammy jobs like this. Let’s face it, what kind of person would take an acting job for a complete scam? You’d have to be desperate!

Take a look at this image below which shows endorsements from The New York Times, the BBC and Bloomberg. These are scam endorsements and the creators of this system could get in big trouble by stating these things which are clearly not true. I looked up the articles and non of them exist, these are clearly scam endorsements and is another clear signal that this system can’t be trusted and is one to avoid! Publications like the BBC have even told people to avoid binary options so there is no way they would recommend them!

Hopefully it’s clear that this is another scam you need to avoid. Not only does it make ridiculous claims about the money you can make but it also has fake endorsements on the website. It’s quite clearly a scam that you should not trust. The truth is I’ve been around this industry long enough to know a scam when I see one and I know for a fact that the only people making money in the binary options niche are the people selling the scams. Nobody is making money from actually trading, so that’s a sign you should avoid it!

My advice, take a look at my recommendation below..

I’ve been making a full time income online for the past few years and during that time I’ve generated multiple 6-figures. Over the past few months I started testing a new system and it’s now my no.1 recommendation since I recently crossed 5-figures per month with it 🙂 You can check it out at the link below:

Go here to see my no.1 recommendation for making a full time income online