It’s easily one of the biggest scams of 2016 and it’s name is the Quantum Code! Created by “Michael Crawford” it’s nothing more than a big pile of BS and it will steal your money. You’ve come to the right place though because on this page I’m sharing my full review and revealing the truth.

Before I start go here to see my #1 recommended system for making money online. At that link you’ll discover a new program I’m using to generate 5-figures per month and it has nothing to do with binary options! 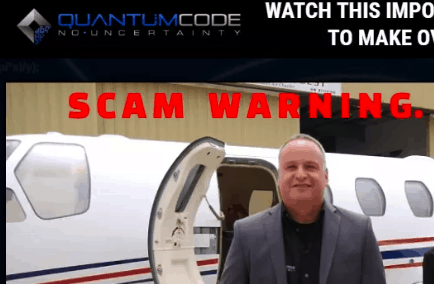 The Quantum Code claims you can make a fortune by using their free app. The first thing you should know is that this app is not free at all. You’ll need to deposit at least $250 to start using it. Sure they’ll tell you that it’s only a deposit and you can get your money back but do not be fooled. This is not just a deposit, because anyone who has deposited into these scams before knows just how hard it is to get your money back. This type of scam is not new and it’s been done many times before with programs like Push Money App and Code Fibo which are 2 well known scams. It’s even had ‘spin off” style programs created from it in order to scam more people like the Quantum Income Machine.

Once you deposit that $250 (or more) their software will start auto-trading for you. This is where you can say bye bye to your money. The software will literally trade away your money to nothing. That is what it’s designed to do. You see the scammers work with the brokers and develop an app that is designed to lose. The brokers actually need you to lose because when you sign up they pay out a big referral commission to the creators of the Quantum Code website. The odds are massively stacked against you and you shouldn’t believe a word that these guys say. They are complete scammers and all they want you to do is deposit $250 or more so that they can get paid. That’s the reason why the sales video is so hyped up! They hired the actor and the private jet to try their best to convince you that their app is the real deal but just like so many others it’s a complete scam.

Quantum Code – Who Is Michael Crawford?

We have absolutely no idea! One thing for sure is he is not the guy he claims. He’s most likely an actor who was hired for the sales video. He’s certainly not a millionaire and isn’t in Forbes as the video suggests. They make those kind of claims because they know that it adds credibility to the scam and that most people won’t even bother to Google him to find out whether he really was in Forbes or not. But after doing the research it’s clear that he is just a nobody. Most likely some failed actor who couldn’t get a real acting job so he had to work for scammers instead! It often makes me wonder what goes through the heads of people like this guy. I can only assume he is completely desperate for money because he must be reading the lines of the script and thinking that it’s a complete load of BS but he simply needs the money. Either that or he has literally no ethics so doesn’t care as long as he gets paid! He probably didn’t realise how big the scam would get and that his face would be plastered all over the internet.

Unfortunately you’re not going to make a penny from this system. It’s nothing but a scam. Binary options have gotten pretty big over the past few years and they continue to be a scammers tool of choice when it comes to making money. I believe it’s because the binary brokers are quite happy to scam their customers and will literally work with the scammers to help them create websites like Quantum Code. Also let’s face it, there’s nothing to actually sell, all they need to do is convince you to “deposit money” and they get paid. All in all this system has already scammed 1,000’s of people but hopefully my review can save a few people from falling victim to it. This scam is definitely the biggest of 2016 and it’s still going strong moving into 2017, when will it actually stop, we don’t really know. All you can do is make sure you avoid the Quantum Code and you’ll be safe!

So Mark, What Do You Recommend?

I’ve been making a full time income online since 2010 and during that time I’ve reviewed 100’s of binary systems and not a single one has made me money. Over the past few months I’ve tested a brand new system and I’ve promoted it to the rank of my no.1 recommendation since I recently passed 5-figures per month with it. You can see my income proof below and check out the system at the link.