Nomi Prins has been working on a webinar titled Running On Empty Summit where she will be talking about her investment strategy and the state of the economy.

She has been focusing on the energy sector and in particular a small company that she believes has the solution to the energy crisis.

That will be the basis of her webinar and in this piece, we take a closer look at what she will cover during the event. We will also address the investment opportunities she is proposing and whether they are worth the trouble. Keep reading to learn more.

Introduction to Running On Empty Summit

Running On Empty Summit is presented by the Wall Street veteran, Nomi Prins, where she talks about a little-known firm that she says can potentially solve the global energy crisis. She asserts that this firm’s revolutionary invention is poised to solve fuel, gas, and energy crisis. 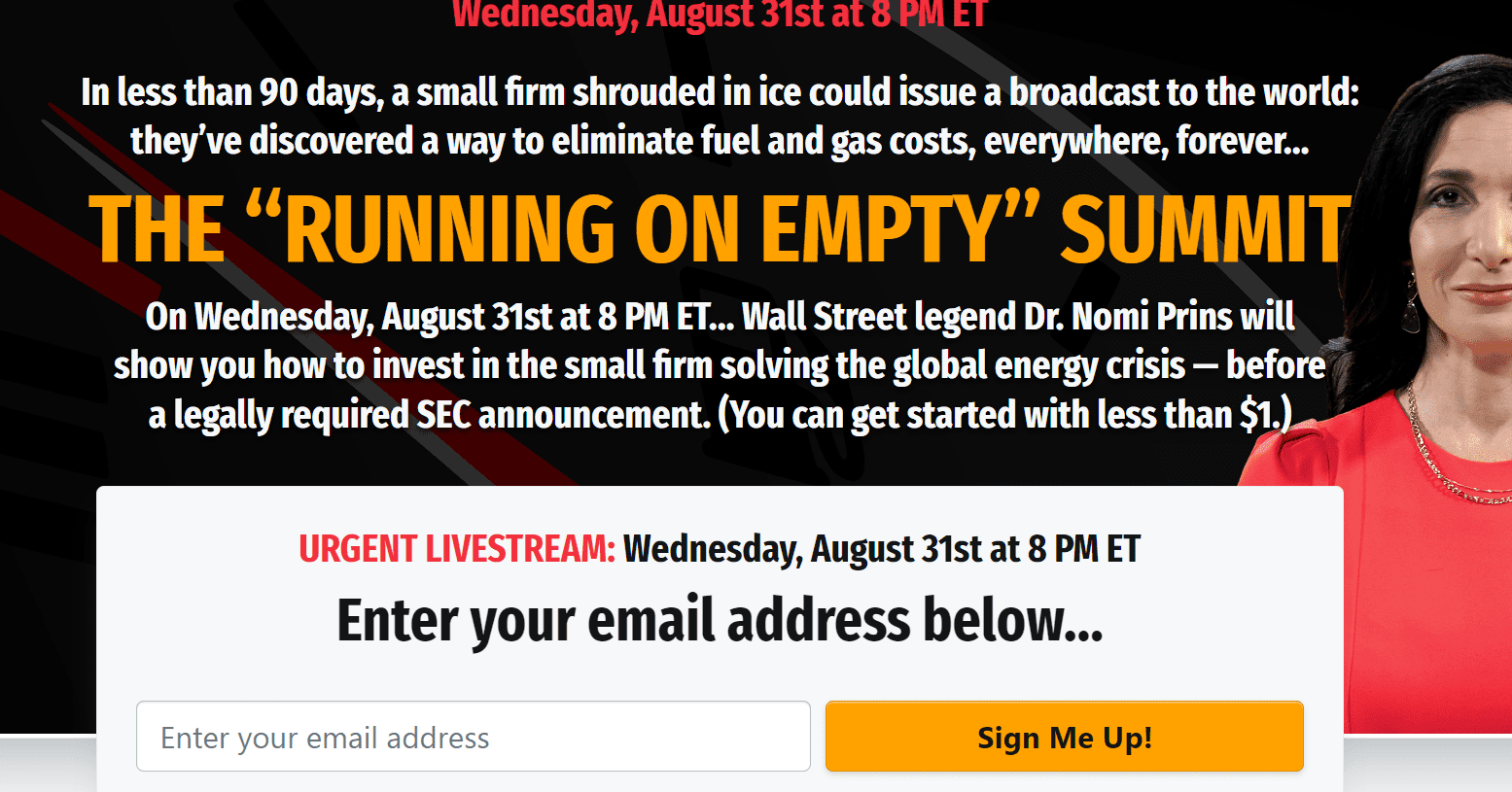 According to many experts, there is a global energy crisis brewing that they think is disrupting the operations of many countries and corporations.

Nomi Prins says that the world is dealing with the effects of a global energy crisis that even the International Energy Agency (IEA) has been warning about:

“As well as causing a grave humanitarian crisis, Russia’s unprovoked invasion of Ukraine has had far-reaching impacts on the global energy system, disrupting supply and demand patterns and fracturing long-standing trading relationships.

It has pushed up energy prices for many consumers and businesses around the world, hurting households, industries, and entire economies – most severely in the developing world where people can least afford it.”

Ever since Russia invaded Ukraine, the energy situation only got worse because of the world’s reliance on Russian oil.

But now Nomi Prins is telling us this can all be solved by the invention of a small firm’s ingenious technology.

Even big players like Amazon, investors like Jeff Bezos and former insiders from Credit Suisse, Tesla, and Ford, and even the U.S. Federal Government and the state of California are all in on this.

According to Nomi Prins, the answer to the energy crisis lies in a 900,000-square-foot facility deep in the American Midwest where, in her opinion, you’ll find the “strangest”—and most important— small company in the Western hemisphere.

According to her, industry stakeholders have called the firm “revolutionary” and official government documents have labeled it a “leader” because she thinks the firm “has literally redefined standards.”

She says that this small firm in the “middle of nowhere” has built a technology that will revolutionize the energy industry by getting rid of fuel and gas prices forever.

She mentioned it in her recent predictions about 2022.

She says that this firm’s work could save Amazon up to $66 billion per quarter in fuel costs. And to that end, Amazon is already in an agreement with the firm to spend, at a minimum, $1.1 billion on the invention.

Besides Amazon, she says that it could solve blackouts in South Africa, deadly riots in Ecuador, and the threat of a “Lehman-like” collapse in Europe.

On a more tangible level, she says that it could save you thousands of dollars at the gas pump and if you move quickly, it can be the investment opportunity of a lifetime.

How to Invest in the Energy Sector

Nomi says that you should consider investing in this small energy firm because it presents you with a unique investment opportunity and she has found a way to invest in the firm for less than $1.

She intends to give you a chance to back the firm for less than $1 before it releases its next quarterly report without trading using stocks, options, bonds, or cryptocurrency.

Nomi says that investing soon is imperative because when it releases its earnings report, that could put the small firm on the front page of every news outlet in America.

Therefore, now is the time to make up to 50 times your money or more over the next several months.

Who is behind The Running On Empty Summit?

The Running On Empty Summit is brought to you by Nomi Prins. She is is an American author, journalist, public speaker, and a well-known Wall Street insider.

Nomi Prins is an outspoken advocate and she has always discussed the widespread impact of financial systems on our daily lives. At this event, her focus is on an emerging energy crisis issue and how it’s likely to affect the global economy.

Not only does Nomi Prins want to focus on this issue, but also she has found a remedy (a small firm’s revolutionary invention) that can solve the energy, gas, and fuel crisis. Therefore, the Running On Empty Summit is totally based on Nomi Prins’ independent research.

Nomi is a best-selling author of several books including Collusion: How Central Bankers Rigged the World, All the President’s Bankers, It Takes a Pillage: Behind the Bonuses, Bailouts, and Backroom Deals from Washington to Wall Street, and People’s Money: The Corporate Mugging of America.

What will be covered during the Running On Empty Summit?

Running On Empty Summit is a live stream event where Nomi Prins will discuss how the global energy crisis is threatening Amazon, Jeff Bezos, and the entire Western World and the possible remedy to it.

Nomi Prins will reveal how a small firm’s ingenious technology could solve this crisis forever and that Amazon is now contracted to spend an estimated $1.1 billion on this firm’s product.

What I like about the Running On Empty Summit

Is The Running On Empty Summit Legit?

Yes, Running On Empty Summit is surely legit. The creator of this event, Nomi Prins, is a well-known investment veteran who has been involved in Wall Street investments for many years.

In this case, she has focused her attention on a small firm that will solve the global energy crisis issue. The company is worth less than $1 per share and now’s the best time to invest as per Nomi Prins.

That being said, there are no guarantees and all investments come with risk. Therefore, be careful if you intend to follow Nomi’s advice.

If you are interested in investing in potentially new and profit-making technology, then you can take a look at Nomi Prins’ Running On Empty Summit. The focus is on a potential global energy crisis and how to deal with it.

Also, Nomi Prins talks about a possible investment opportunity and how to profit off of it. She recommends investors invest in a small energy company for less than $1 that could potentially 50X your investment.