Tai Lopez has been promoting a program called Viral Video Influencer Agency (VVIA) where he is calling for people to join his test group.

In this article, I walk you through what VVIA is all about, what you can expect to get from it when you buy it, and whether the whole thing is legit.

Tai Lopez Viral Video Influencer Agency (VVIA) is a new program Tai Lopez is working on where he teaches people how to start agencies that deal with viral video content. 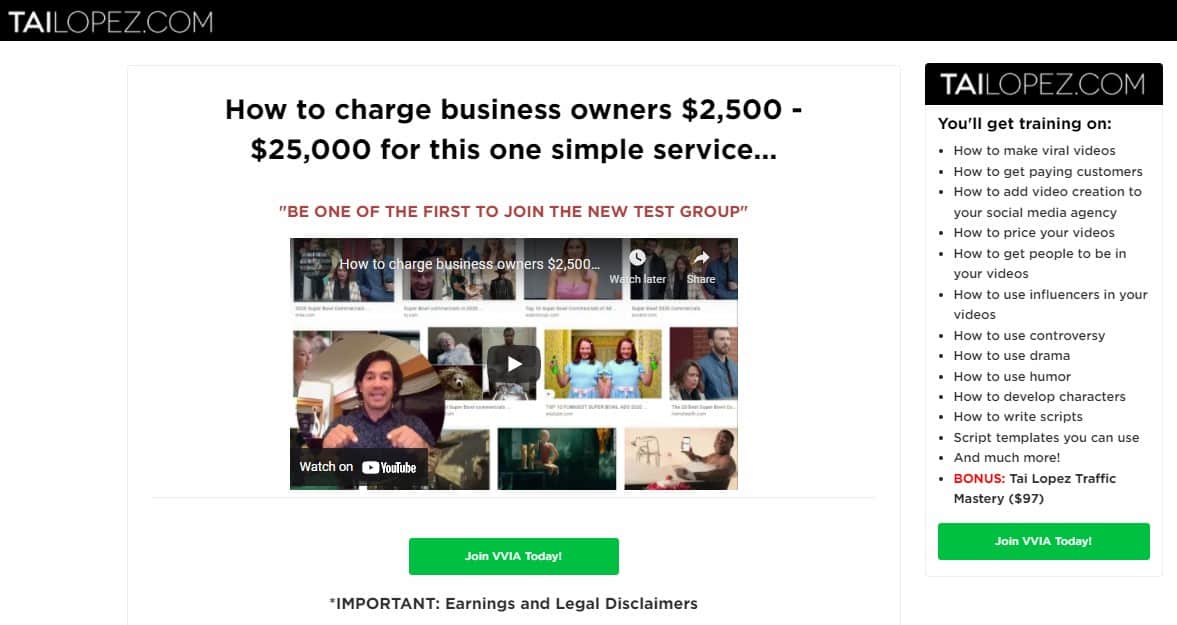 The training he offers is supposed to help you write and create effective video ads that increase sales for your clients and helps them transform their businesses.

Tai Lopez intends to share a system that helps you produce video content and boosts sales for you and your clients. He says that it shows you what it takes to make viral videos.

This is not the first time he is offering such a program because if you recall, Tai Lopez offered another program in 2016 called the Social Media Marketing Agency (SMMA). He even mentions this on the VVIA sales page:

“This isn’t just ‘ANOTHER PROGRAM’

Back in 2016, I told everyone to start a social media marketing agency.

Today- the people that took advantage are reaping the rewards. Small and big companies alike are hiring social media agencies, staff, and managers.”

Back then, he was telling people that big and small companies were hiring social media agencies and consultants who would help them have an impactful presence on social media. And by impactful, I mean improved sales and an overall good brand image. I know his because I reviewed the program (and its subsequent upgrades)

He offered SMMA to teach people how to start agencies that would help those businesses achieve their objectives.

With the Viral Video Influencer Agency, it looks like he is offering a similar program, only this time, he wants to train people how to make viral videos for businesses.

Tai Lopez thinks that the next big thing is viral video content.

He points to the rise of TikTok and says that by some estimates, the video-sharing platform could even be more valuable than Twitter even though the latter has been around for years.

Tiktok is a Chinese platform that has only been around since September 2016 (launched outside China in 2017). It wasn’t in its current format but that’s when it was created.

Its signature 15-second short videos that are shot on a smartphone are the embodiment of what Tai is talking about.

More than 2.5 billion installs for such a young platform is more than impressive; it is emblematic of a cultural phenomenon that has caught on all over the world (except India, where they banned it).

Unsurprisingly, there have been other apps that have mirrored the concept with varying degrees of success. Even the big boys – YouTube, Facebook, and Instagram – don’t want to be left behind and are creating their versions of the app for short video sharing capabilities.

Tai Lopez believes that viral video content is the next frontier and he hopes that he has caught the trend early enough to help his followers take advantage of it.

With VVIA, he hopes to help his followers tap into the corporate market. On the sales page, he says:

“Your potential clients know video is the best way to show their product or service but they’re not sure where to start, or how to make an effective ad that ensures sales.

This is your chance!”

His new program is designed for that.

Who is Tai Lopez?

Tai Lopez is a guy who wears many hats. You can describe him as an influencer because he has 2.9 million followers on Instagram, 6.2 million fans on Facebook, 1m subscribers on YouTube, and 1.2m followers on Twitter. He was voted the Number 1 Social Media Influencer by Entrepreneur Magazine

Tai is also an entrepreneur because he has played a part in starting or running over 20 multi-million-dollar businesses.

However, he is best known as a self-help guru. His most popular program, 67 steps, is a mentorship program that emphasizes the importance of reading books and having strong mentors.

Through his various programs, he has been offering advice on how people can achieve financial freedom and live satisfactory personal lives.

He runs a popular book club and a podcast called “The Tai Lopez Show,” which gets around 800,000 downloads per month. He also owns a book shipping club called the Mentor Box.

Tai Lopez has had a few run-ins with celebrities and he has had conversations with Kobe Bryant, Hilary Clinton, Rihanna, Jordan Belfort, Steven Spielberg, Mark Cuban, Chris Paul, and Caron Butler.

Tai Lopez wants to share the behind-the-scenes insights that go into creating viral videos. He hopes to leverage his experience of writing scripts that have turned a profit for him and his companies.

When you sign up for VVIA, he trains you:

He also wants to share with you script templates that you can use to create video content.

As a bonus for joining the VVIA program, he will also give you access to another program he offers called Tai Lopez Traffic Mastery that goes for $97.

As of writing this, they are doing test groups and I will update you as we learn more about the pricing.

Tai Lopez is no stranger to going viral as he is widely known for his “Here in my garage” YouTube video that earned him notoriety in pop culture and spurned memes. He shot the video as he was promoting his 67 Steps program. 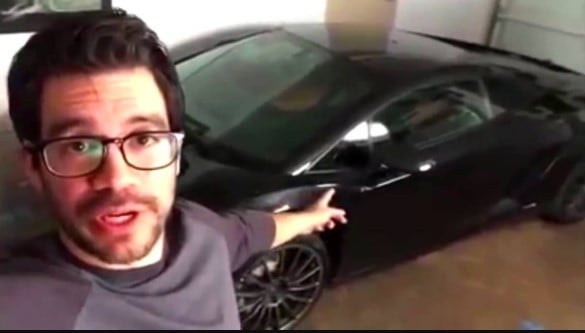 Tai Lopez has a few times in the past been ahead of the curve. For example, he once did a YouTube video where he urged people to take crypto and Bitcoin seriously. This was in 2019 before Bitcoin and the whole crypto market took off.

He is hoping that he is right about viral video content being the next big thing and he replicates his previous successes when he’s been right about trends.

I should point out that he may end up not taking his followers to the right places because viral content is not a novel trend; it has been around since there was a mass uptake of the internet.

So, keep that in mind as you decide whether to buy his program.

Tai Lopez’s Viral Video Influencer Agency (VVIA) is his latest online training program. If you know Tai Lopez, he will promote it aggressively because he believes that he can train you to be a viral content producer.

If you’ve been following trends like the rise of social media platforms like TikTok, it is hard to argue against what he is talking about.

The way I think Tai Lopez sees it is this: there could be a demand for creators who know how to make viral videos because corporate entities will want to create viral videos for the social media platforms.

He wants to be the one training those creators because he believes that he has the experience and know-how of how viral content works.