It comes on the back of Teeka’s previous predictions that have performed quite well in the market. He hopes to replicate them by predicting yet another one that could possibly end up doing well.

If you have been wondering what to make of this, you have certainly come to the right place because in this review, I go into details of his new investment pick to help you learn more about it.

Teeka Tiwari’s 3rd Trillion Dollar Trade is going to be Teeka’s next big pick since he did his last one about crypto. That’s why Teeka Tiwari decided to do this event. 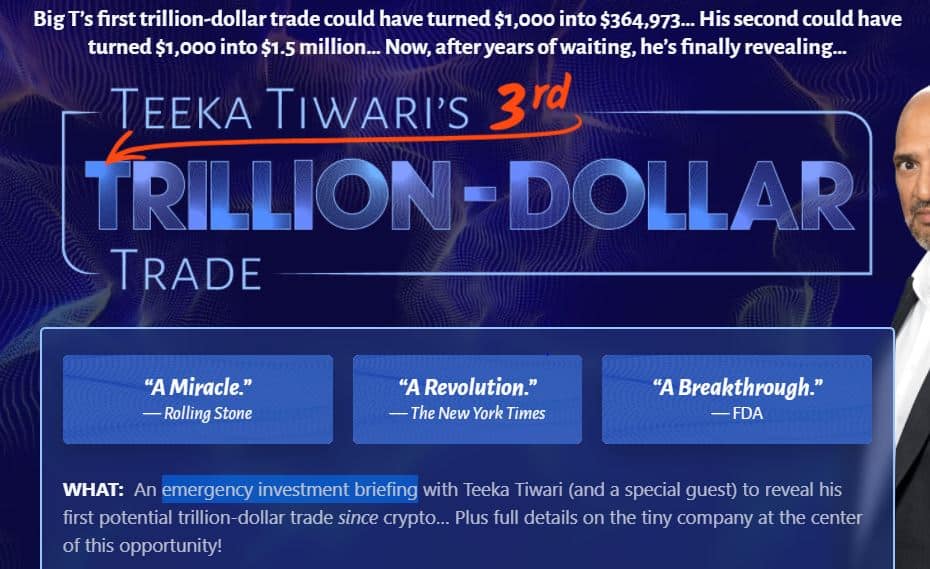 He says that it is the latest trillion-dollar trade since the cryptocurrency boom, which saw Bitcoin attain a market capitalization of $1 trillion in February.

Teeka Tiwari says that he has identified one tiny company that’s at the center of this great opportunity. The opportunity centers on a powerful scientific breakthrough in healthcare.

He says that it involves a pending “miracle” in human medicine that will span a new $1 trillion industry that will earn investors 100 years’ worth of profits in the market in as few as 18 months. The “miracle” will resolve a crisis that affects around 800 million people world wide that costs the economy $2.9 trillion every year.

This investment opportunity is expected to be highly profitable for early investors. Whenever such a technical breakthrough opportunity occurs, it creates an excellent wealth opportunity, according to Teeka.

This is not unique to this industry as it has already happened with the internet, the auto industry, and cryptos. Every time these investment opportunities have occurred, they have made a few investors very rich. The same thing is now going to happen with Teeka Tiwari’s 3rd Trillion Dollar Trade.

In addition to that tiny company, Teeka has also identified five other penny stocks that could do well. He claims that an investment of only $1,000 in them could earn enough money to fund your retirement.

The whole thing is brought to us by Teeka Tiwari, an investor analyst with an impressive track record who is also known as a crypto expert.

Few people in the financial newsletter business are as efficient as Teeka Tiwari when it comes to picking the right crypto investment opportunities. He edits Palm Beach Crypto Income Quarterly and Palm Beach Confidential, two newsletters that are all about cryptocurrency investments.

Teeka Tiwari came to America at the age of 16 years with just $150 to his name. He believes that he exemplifies the American Dream because he worked hard and became the youngest employee at the Lehman Brothers when he was just 18 years old. At the age of 20 years, he became the vice president of Shearson Lehman.

He was also trading professionally. He made a huge gamble by going short during the Asian Financial Crisis and it paid off massively. Unfortunately, his inexperience made him lose all the gains he made and then some. He even filed for bankruptcy.

During his career, he has acquired knowledge and insights about various investment strategies that have enabled him to offer investment advice through his advisory services. Teeka Tiwari has helped many people to attain their financial freedom and become financially independent.

What to expect from Teeka Tiwari’s 3rd Trillion Dollar Trade

Teeka Tiwari believes that it’s the most exciting investing summit of the year. In the invitation, John Burke reveals more about the industry Tiwari is talking about.

He says that after five decades, the government has been forced to open the trillion-dollar opportunity to investors. He says that 99% of Americans know anything about the coming revolution and that hasn’t been accidental.

Why? He says that the CIA, Congress, and the FDA have been spending millions of dollars over 50 years trying to confuse, scare, and keep Americans away from the opportunity. They have kept a secret from the American People since 1971.

He says that it all has to do with a molecule that is so powerful, the government has labeled it as a breakthrough. Burke says that the authorities should be scared out of their minds because the next trillion-dollar revolution will not only disrupt an industry or two, it could disrupt civilization itself. In doing so, it could topple the elites and allow a small circle of early investors to get very rich.

Among the things that they will discuss include:

As outlandish as that sounds, it may happen. We have seen in the past companies rise exponentially because they were involved in a trendy niche like smartphones in the 2000s and 2010s and the internet in the nineties.

Teeka Tiwari’s 3rd Trillion Dollar Trade is about a bunch of stocks that may benefit from what Teeka expects to be a new trillion-dollar industry. As we have seen, it involves a miracle of human medicine that will resolve problems that have been affecting up to 800 million people and costing the economy up to $2.9 trillion annually.

When you put it in those terms, it seems like a huge deal. Not to get ahead of myself, but I think it may have to do with either medical marijuana or gene therapy. Whatever it is, it will be interesting to see what Teeka Tiwari has in store for us.