Welcome to my review of a presentation by Shah Gilani with the title “The Biden-Harris Wealth Wipeout.”

In it, Gilani claims that the Biden-Harris administration wants to impose a new tax and income distribution policy that will take away your wealth in a money grab and he has a way in which you can survive this and keep your money.

In this review, I summarize everything that he talks about and even reveal the names of the companies he is recommending.

Introduction to The Biden-Harris Wealth Wipeout

The Biden-Harris Wealth Wipeout is a presentation by Shah Gilani in which he warns that the new administration wants to implement aggressive wealth and income redistribution policies that can pass for socialism.

But he has a guideline that will help you to not only survive but also prosper. 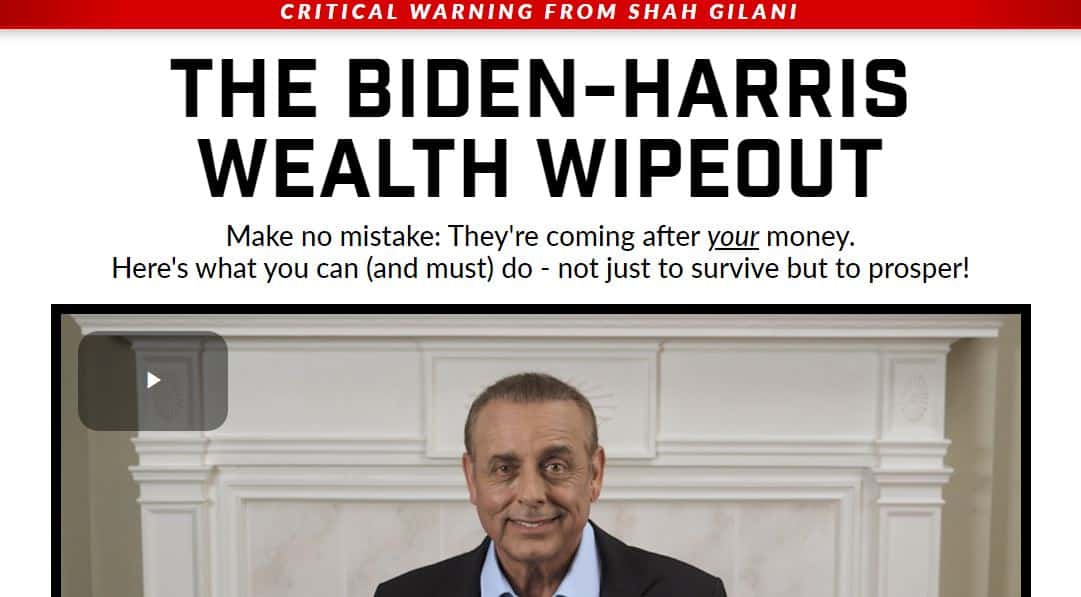 As the Biden presidency implements those policies, some industries will be impacted negatively as others get a boost. Therefore, Gilani wants you to avoid the ones that will suffer and put your money in the industries that will do well.

In each of those sectors, he has identified companies that you should avoid and the ones you should go for. He has them laid out in the “Buy This… Not That” format that we saw him use in the 2021 Investors Address.

The ones he wants you to buy are those he expects to grow exponentially due to favorable policies and healthy financials. Another feature they have is an “unbreakable competitive advantage.” The stocks to avoid are overvalued and laden with debt.

He groups them into the sectors to which they belong:

Guns and Ammo have been in high demand despite efforts by the Biden administration to gut the second amendment. Therefore, it is a sector Gilani wants you to consider as you invest.

He teases a small ammo manufacturer and after doing a bit of research, I found out he was talking about Ammo Incorporated (POWW).

Generally, he expects the federal government to promote alternative energy and diminish the oil industry. Therefore, he wants you to bear that in mind as you invest.

He teases a company that is developing technology that will convert gas and diesel engines into natural gas burners. It has partnered with big oil companies to bring renewable natural gas. The company that fits the descriptions is Clean Energy Fuels Corp (CLNE).

As the Biden Administration takes a different approach to border security, Gilani expects more immigrants to enter the country and as they work here, send money back home to their families.

He teases a bank that lends money to individual and small to medium-sized businesses and operates from the Bahamas, Jersey, Bermuda, Switzerland, and the Cayman Islands. It pays its shareholders a dividend. The bank that fits this description is The Bank of N.T. Butterfield & Son Limited (NTB).

He teases a robotics company that helped clean up the Deep Water Horizon spill in the Gulf of Mexico. It has also been involved in healthcare developing an FDA-approved robot that promotes remote presence in hospitals. These clues point to a company called iRobot Corp (IRBT).

He teases a company that manufactures automotive microelectrical mechanical systems that are used in a variety of sensors. These clues are vague and could refer to a couple of companies. However, Gilani once wrote about a company called Analog Devices Inc. (ADI)

Who is Shah Gilani?

Shah Gilani is the leading investment analyst at Money Morning, a subsidiary of the Money Map Press. In his profile on the website, it says that he is widely considered to be one of the foremost experts in a credit crisis.

It also says that he has years of experience in the industry and has developed an uncanny ability to pick the right trades at the right time, which explains why he is sometimes referred to as the trader’s trader.

In 1982, Shah Gilani created his first hedge fund when he was working for the Chicago Board of Options Exchange. Soon after, he established himself as a top market maker as well as market advisor.

He studied economics and psychology at the University of California, Los Angeles.

The Biden-Harris Wealth Wipeout was meant to give us a taste of what Shah Gilani has in his 2021 Financial Freedom Action Plan, which can best be described as a guideline that can possibly help you to secure your entire financial future.

To get it, you have to sign up for his advisory service, The Money Map Report. When you join, in addition to the action plan, you get the following special reports for free:

Is The Biden-Harris Wealth Wipeout Legit?

The Biden-Harris Wealth Wipeout is a legitimate presentation by Shah Gilani. He is an experienced investment analyst who’s been professionally involved with the industry for close to four decades. He has also made numerous TV appearances to talk about investing and the markets in general. Therefore, he is competent enough to be talking about this.

Gilani is also right about the Biden-Harris administration affecting various industries differently thus necessitating a need to tailor your strategy to adjust accordingly to the new reality.

That being said, there are no guarantees that his investment insights and his recommendations will work out because they are subject to market risks.

The Biden-Harris Wealth Wipeout was meant to promote the Money Map Report. But at the same time, it gives Gilani a platform to share his strategy. He wants us to adjust our portfolios to keep up with the changes to the policy approach of the new administration (compared to the Trump administration) and throughout his presentation, he recommends and condemns various stock picks in line with this.

I think the approach makes sense because how Biden approaches something like Energy is drastically different from how his predecessor did. Therefore, you should adapt your portfolio to such changes to avoid losing money.