Have you heard about The Global Race For $3.1 Trillion, a presentation by Michael Robinson about a race between the US and China to dominate the technology field.

According to Michael, the two nations are competing to dominate a technology that could be worth $3.1 trillion in the years to come. And from an investment perspective, he expects some companies to benefit from this.

To find out what Michael is talking about as well as how he wants you to invest, keep reading this review where I walk you through the key points he raised in the pitch.

The Global Race For $3.1 Trillion Review

Introduction to The Global Race For $3.1 Trillion

The premise of The Global Race For $3.1 Trillion by Michael Robinson, besides advertising an investment newsletter, is to make us aware of the fact that there is a new technology we should be taking seriously because investing in the right companies involved could make us rich. 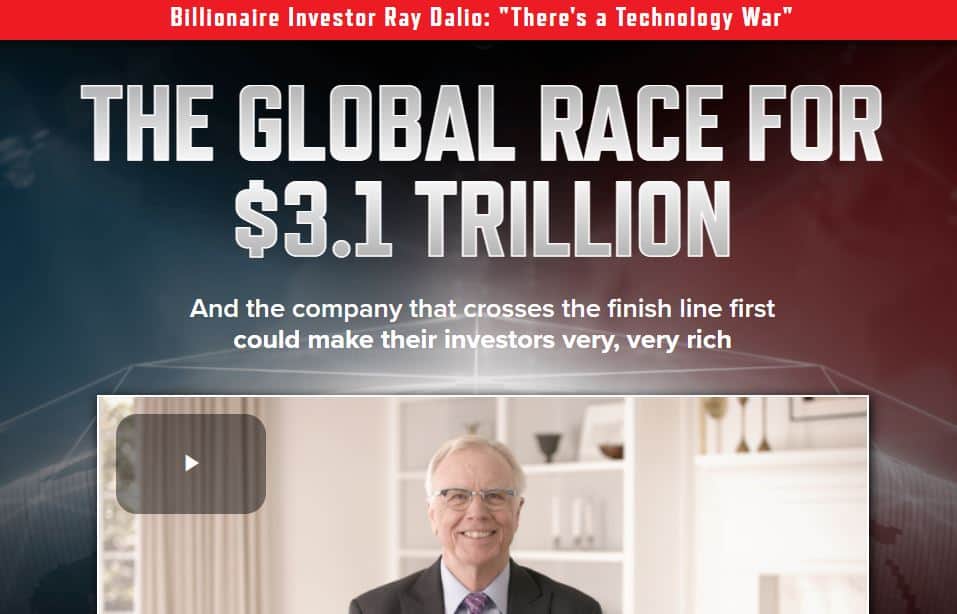 The technology he is talking about is the Blockchain.

He says that America and China are warring over which country will dominate the Blockchain, which he thinks is one of the most important developments in the sector. He estimates that it could add up to $3.1 trillion to the global economy over the next ten years.

The Blockchain is a platform that stores and sends information. What sets it apart from other record-keeping methods is that it is more efficient at this and it ensures greater security. The fact that it ensures data is kept secure in a public ledger makes it particularly useful for businesses like logistics where information has to be accurate and have integrity.

He says that the government is working closely with the private sector to accelerate the development of the Blockchain. From that, he has identified one company that he wants you to consider investing in.

What does he reveal about this mysterious company?

He put details of this company as well as four others involved in the Blockchain in a special report called The Global Blockchain Project – 5 U.S. Companies Leading The Race To $3.1 Trillion. To get a copy of it, you have to sign up for NOVA-X Report, an advisory service edited by Michael.

After doing my research, I found that the company he is teasing here is IBM.

Who is Michael Robinson?

Michael Robinson is the director of Technology Investing at Money Map Press. He is the editor or contributor to Money Morning, Strategic Tech Investor, Radical Technology Profits, and the Nova-X Report.

Speaking of his education and background, he has a BA degree in economics with honors from the University of Missouri Columbia. He is a journalist too.

Michael has been in the financial services industry for four decades. During that period, he has witnessed the introduction of novel technologies that have morphed into important elements of the society.

He works as an advisor to tech startups and was a consultant and board member of a venture capital firm that was investing in startups.

He is considered one of the nation’s top experts on technology investing. He has appeared as a guest on Fox Business Network, Bloomberg Radio, CNBC, and The Street.com.

What do you get when you join Nova-X Report?

The Global Race For $3.1 Trillion was released by Robinson to promote the Nova-X Report. In addition to the report about those blockchain plays, you get:

Subscription Price: $39 per year with a 60-day money-back guarantee.

Is The Global Race For $3.1 Trillion Legit?

The Global Race For $3.1 Trillion is a legit presentation by Michael Robinson that centers on finding ways to invest in the blockchain revolution.

Many experts believe that the blockchain will be an important technological development and we already have multiple use cases that prove its utility. In particular, it has proven to be an effective way to store public records to ensure transparency and security. If you think about it that way, Michael is justified to be excited about it.

That being said, you should not subscribe to a newsletter purely because Michael says that he knows how best to invest in the Blockchain trend.

The Global Race For $3.1 Trillion Verdict

Investing in blockchain plays now that the technology is starting to catch on is not a bad idea. If you find a great company that will be involved and invest in it early, you may make a lot money in the long haul. In this case, Michael recommends IBM, which is already a big company.

However, do not just rush to invest in a company because you don’t want to be left out. Do your research to ensure that it is the right investment.