Looking for a review of The Oxford Communique?

The Oxford Communique is an investment advisory service created by The Oxford Club.

Today I’ve put together an honest and unbiased review sharing the pros and cons of this newsletter.

Keep reading below to get all the details!

Introduction To The Oxford Communique

The oxford communiqué is a financial advisory service created by The Oxford Club that is available to help people figure out where to invest their money and which services are the safest so they can help themselves grow without having to put in too much effort in their investments.

The Oxford Club is actually a subsidiary of Agora Financial (now known as The Agora) who are behind numerous financial publishing websites. 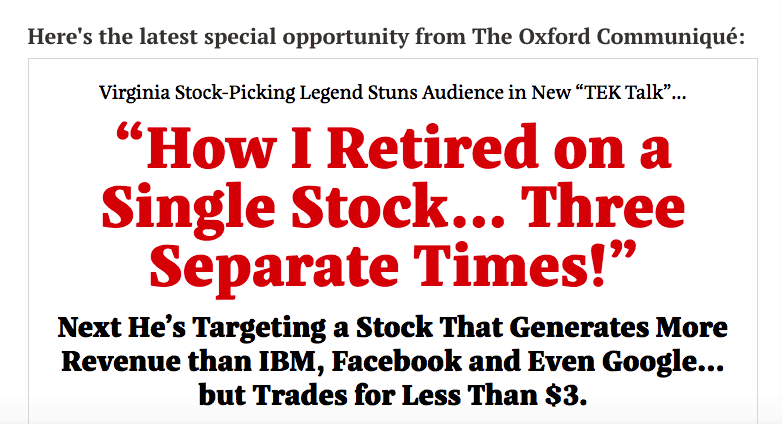 The latest thing that has been introduced by The Oxford Communiqué is the single-stock retirement plan.

The single-stock retirement plan is an online service introduced by Alexander Green that helps in the creation of a millionaire retirement through the investment of $3 stock.

I’ve seen similar promotions recently like the $5 Fluorescent Sand stock and the #1 Tech Stock For 2020.

The idea is that if retirement is to happen, it has to happen through the perfect stock.

The idea seems as if it is dumb; however, it can be used to benefit both the investor and the person that runs the business as it is an easier way to get the perfect retirement that every individual requires.

Alexander claims that many men and women from America, particularly the wealthiest men and women, have already used this product, and they have succeeded with using it.

It has benefitted them in many good ways.

How Does The Oxford Communique Work?

There is a small investment into the $3 stock, which can eventually turn into billions of dollars.

Of course investing a mere $3 isn’t going to do that but what it is saying is that this tiny stock could be worth billions, so the right investment could create millionaires!

This is such a simple task; anyone could do it.

This is why it is so hyped up by Alexander, who claims it is the easiest way to find a safe retirement plan without the hassle of investing in so many other stocks to no avail.

The service of The Oxford Communiqué works with a payment of $99, and it is based on focusing around the retired or the retiring to give their retirement funds a boost.

Using the Oxford Communiqué subscribes the reader up for a Monthly Newsletter that helps the reader gain Alexander’s opinion on what the best investments are.

You can also gain Weekly Updates that help you see the progress in your investment.

It is also only available to those who have already subscribed as it is a paid service, and thus the weekly updates and the opportunities are only present to those who already exist in using the product.

Who Is Behind The Oxford Communique?

The service is originally owned by a blue-collar worker who only had $7500 to his name, Alexander Green!

He was claimed to be a persistent entrepreneur that never took no for an answer and realized that he could change their whole systems by being part of the larger corporations such as Intel, Microsoft, Apple, etc.

The product itself is introduced and complimented by Alexander Green, a man who is a publisher at the Oxford Communiqué who claims that it is the best investment that can be made in the business world since it is so successful and worth it.

Alexander talks of how the service has helped many of the richest people in the world keep their wealth intact and how they used this particular service to help them attain this wealth and even keep it with them.

He is a respected individual, but he is not very easily found outside of the Oxford Communiqué either.

This can make him seem a little shady.

However, it is sure that the man himself is genuine and has even written many books of his own, so he is not completely the biggest scam.

Is The Oxford Communique A Scam?

It is not sure whether the service is a scam or not, although there are a few mysterious things that are surrounding this service.

There has not been any proof claiming that this service is a scam, so outright, it cannot be said; however, it does have some very suspicious and fairy-tale marketing that makes the process seem simpler than it might be.

The marketing can be considered misleading as it is not exactly told how this service works.

This can make it harder to trust, although the lack of evidence against it also has many factors in the trusting process of this service.

There have been many complaints about the service, and thus it can be a scam; however, there are not many of those, and thus, no judgments can be made so early.

Many people are very quick to call the service a scam; however, this has not been proven by anyone just yet, and this leads to the confusion; however, in my opinion, the process does seem a little too good to be true.

The service itself is not one that can be trusted.

This is because it is so prominent that they are intent on misleading their followers, and this, in turn, can only bring damage to people, not benefits.

This means that they can have the utmost benefit while bringing those investing down.

However, the service has not exactly been proven to be wrong, and thus, claims made about it being so can be negated by those who have actually used this product, and they prefer it to others.

It is just a matter of staying cautious.