Before I start – Go here to see my no.1 recommendation for making money online

As soon as I started watching the sales video for The Royce Code it was clear that I was dealing with a complete scam. The claims made in their video are ridiculous and highly unrealistic. The fact that they state they have the only insured withdrawal system in the world is a lie because no such system exists. Other similar scam systems that launched in the past week are Profit Replicator App and Prove My Profits. 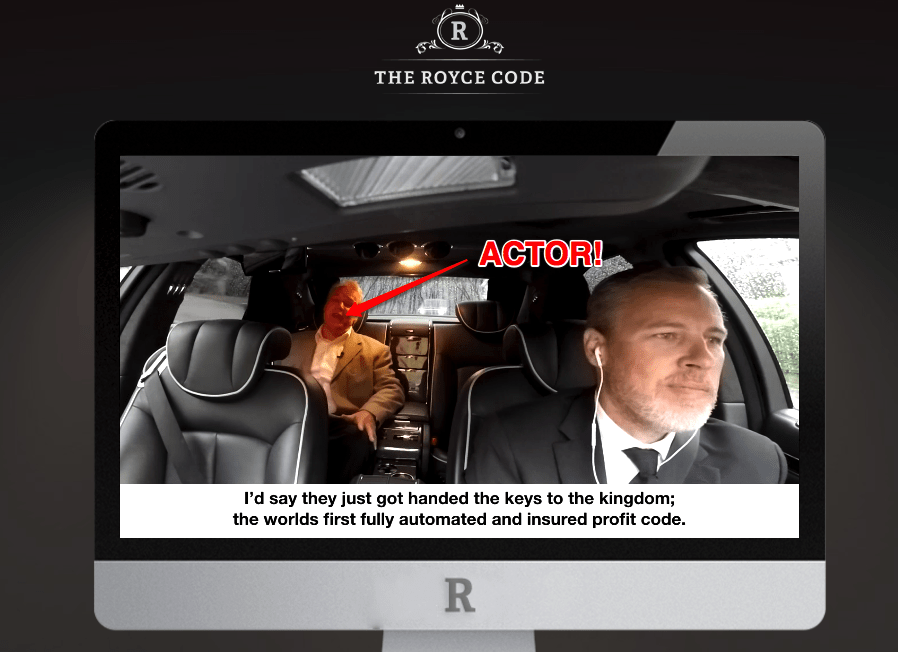 The person claiming to be the owner of The Royce Code is quite clearly an actor. The scammers behind systems like this hire actors for their sales videos. In fact the company in general that he talks about is made up and is just further proof that we are dealing with a big scam here. What really bugs me about The Royce Code though is that they take their scam a step further by talking about insurance and essentially they make it seem that you can’t lose. This is going to be very dangerous for newbies to the world of binary options trading and even people who have been scammed before because it will massively mislead them. Obviously this is the aim of The Royce Code as they have put together their sales script to mislead people into investing so that they lose their money.

I also noticed that they have used actors for their testimonials too which doesn’t surprise me. Naturally The Royce Code doesn’t have any real testimonials because everyone who joins gets scammed so they hire actors who will give fake testimonials for them for as little as $5. I actually recognise the people giving the testimonials because they have appeared in many of scam systems sales videos before just like this guy below: 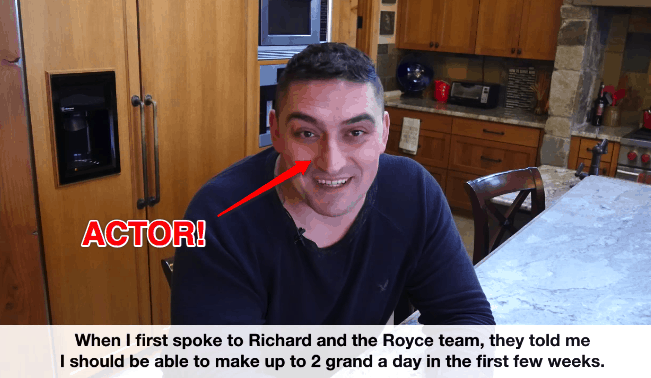 The person giving the testimonial here in the screenshot above has appeared in many other scam systems, not just The Royce Code. It’s clear to me that this person is not making money from The Royce Code and is simply an actor they have hired.

The Royce Code website is full of lies about binary options and how their system works. For example they talk about how they have billions of clients money under their control and basically say that they are essentially a hedge fund. This means that they will invest other peoples money in order to get a return however the fact that they are in the binary options industry is a huge giveaway that their story is a pack of lies because no real investment firm would operate in binary options. It’s like saying you operate an investment company that specialises in gambling, it just wouldn’t happen. Because that’s ultimately what binary options is. Binary options is gambling on the stock market as you never actually “invest” money into the assets you trade, you are just betting on their direction.

Also, want to know a fact about binary options? The brokers operate just like casinos. In other words they need you to lose for them to make money. This is something many people don’t realise about binary options however once you know this fact you’ll soon realise that all binary options systems are scams. If The Royce Code really worked like it claims to make $1,000’s per day for regular people then why would the brokers partner with The Royce Code creators if it would cost them money? They wouldn’t! Let me explain how it all works below…

The Real Truth About The Royce Code

The real truth about this scam system is that nobody who signs up makes money. The binary options brokers pay a referral commission to the owner of The Royce Code website. Whenever someone new signs up and makes a deposit to start trading the scammer behind the Royce Code website gets paid. This is how all binary options scams work. The brokers will happily pay out huge referral commissions to people who send them new customers because they know that these people won’t make a penny!

Like I said the brokers only make money when you lose money. So after you sign up and make your deposit, they go ahead and pay out a commission to the Royce Code owner (the scammer) and they give you access to the software as promised. However this software won’t work as promised by the sales video. Oh no, it will make automatic trades for you however it will actually lose you money on purpose and within a few hours or days you’ll have lost all your cash. If you’re lucky the scam will end here, however some people have been taken for far more than the minimum deposit amount. If you’ve already signed up I highly recommend you avoid all calls from the broker as they have been known to convince people to part with their life savings and deposit even more money than they started off with!

The brokers are dangerous and the only real way to avoid losing money is to never bother signing up with The Royce Code to start with!

My Conclusion For The Royce Code

It should be obvious from my review that I am NOT recommending this system. In my opinion it’s a complete scam!

If you want to see how I make a full time income online go ahead and check out my #1 recommendation for making money below.