When Stansberry Research released a presentation with the title Dr. Ron Paul’s Stimulus Warning for Every American, they were banking on the former congressman’s appeal.

The Socialism Survival Guide, as you may also call the presentation is about the economic impact of the policies put in place by the federal government to deal with the pandemic.

In this piece, I walk you through Ron Paul’s presentation as I highlight the main talking points he raised in case you haven’t gone through it yet.

Introduction to The Socialism Survival Guide

Stansberry Research brought Ron Paul (the former congressman) on to talk about the impact of government stimulus on the economy. From the off, he expresses his disapproval of the government’s liberal use of open market operations as well as giving people stimulus checks.

Though considered crucial to people who have lost jobs due to the economic recession caused by the pandemic, he argues that there is a negative element to this approach because it will also cause a possible economic fallout. 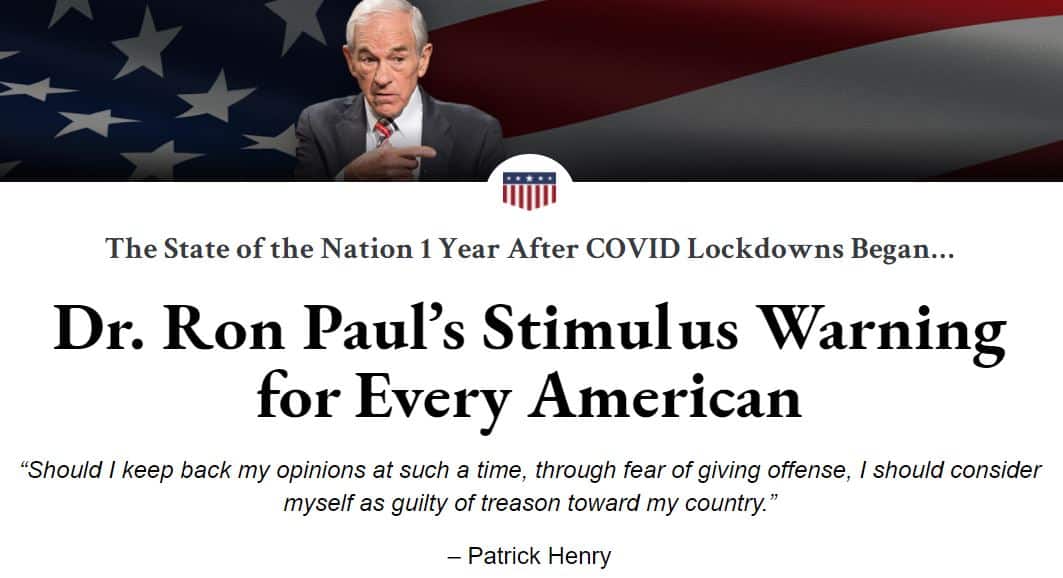 He is not the first investment analyst to take this stand as we’ve seen others like Nomi Prins (Rigged Open Market Operations) and Robert Kiyosaki (Final Wealth Transfer) also go against expansionary monetary policies.

Ron Paul believes that the government has used the pandemic to wrestle more power and control over people’s lives and that the hysteria surrounding COVID has been overblown and some politicians have used the panic for political profit.

He says that the stimulus checks haven’t prevented people from getting poorer and businesses from continuing to struggle. He equates it to “easy-money” handouts and claims that it is setting America up for a socialist future.

Economically, he says that printing more money out of thin air is creating more public debt, devalued the dollar, and increased the cost of living. He doesn’t even rule out hyperinflation and says that it is no longer inconceivable.

Who Is Behind The Socialism Survival Guide?

Ron Paul is an American author, physician, and retired politician. He was a member of the U.S. House of Representatives, a post he held for 22 years. Ron is the father to U.S. Senator, Rand Paul.

Since he retired from active politics, he has been pushing his libertarian agenda in college campuses. He also co-hosts a YouTube show.

How Does The Socialism Survival Guide Work?

Ron Paul proposes that the best way to prepare for a possible economic crisis is to read a book that has been published by Stansberry Research called The Battle for America. He says that it is a great resource that explains whatever is happening in the country as well as gives you actionable steps on how to protect yourself.

The book is not being sold on Amazon or any bookstore; you can only get it by signing up for a newsletter called Stansberry’s Investment Advisory.

When you sign up for it, you receive three dossiers:

What’s more, you will get access to two additional special reports: The Tax-Free Way to Make 500% Gains in America Today and The World’s Most Valuable Asset in a Time of Crisis.

Subscription Price: An annual subscription to Stansberry’s Investment Advisory costs $49. It has a 30-day money-back guarantee.

Is The Socialism Survival Guide Legit?

The Socialism Survival Guide is a legit presentation by Ron Paul. Dr. Paul is a former congressman who’s been pushing a libertarian agenda for years. Although the presentation is meant to promote a newsletter service, it doesn’t come as a surprise that he is against stimulus checks because recall that he has also taken positions against the Federal Reserve before.

That being said, you should not take his talking points as the infallible truth because he is merely expressing his opinion. He may be wrong about an impending financial crisis too thus you should take everything in the presentation with a grain of salt.

The Socialism Survival Guide was put out to promote Stansberry’s Investment Advisory, an investment newsletter that is published by Stansberry Research. In addition to promoting the newsletter, it also gives Ron Paul a platform to talk about the economy and the impact that government stimulus will have on it. Although he goes a bit extreme when he says that he is not ruling out hyperinflation, it exemplifies his outlook.

Stansberry Research brought Ron Paul on to give their presentation credence, which is a recurring theme in the world of newsletter publishing — Sarah Palin, John Boehner, and Bill O’Reilly have also been enrolled by other publishers to help push newsletters.