Welcome to my review of Jeff Clark’s Traders Paradise event.

Jeff Clark is confident that this is going to be his biggest market prediction in 40 years.

Are you seeking to know more about his strategy?

If you are, you have come to the right place because in this review, we cover what it is all about and whether it is a legit event worth attending.

Jeff Clark’s Trader’s Paradise is a special event meant for all kinds of investors, whether you are an experienced investment veteran or a novice.

Jeff Clark talks about a rare market move that may happen soon that will make now a bad time to be an investor. He refers to it as a “zero-sum” market and claims that when it happens, stocks will chop back and forth, unable to make any gains. 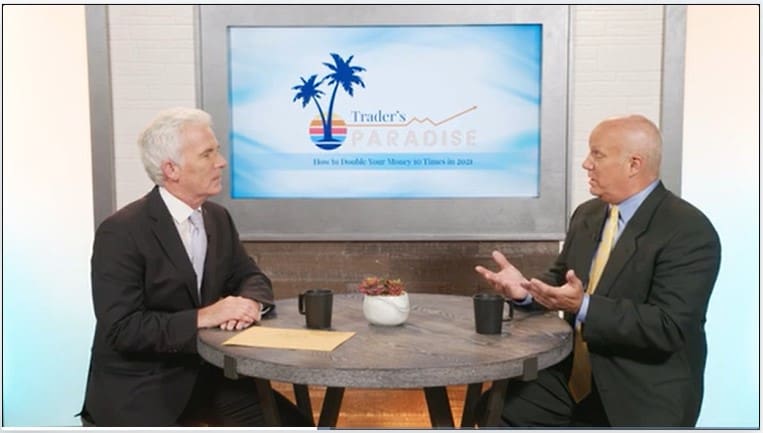 According to Jeff Clark, 2021 is the worst time in 20 years to own stocks and amid all the stocks on the market, he has identified one that he thinks you should avoid. He has written about it in a report titled the #1 stock to avoid right now and he reveals it in the presentation for free.

Along with that, he shares details about where the market is headed; this is where the concept of the zero-sum market comes in.

Jeff says that it has already affected stocks like Apple and Netflix for over a year and that almost all other public companies will be subject to the same fate in the next few months.

As Jeff puts it, the zero-sum market is something that has happened just twice in half a century and when it does, he can show you how to double your money multiple times in a couple of months.

Jeff Clark claims that the last time this happened was 2019 and he issued a big warning at major conference. He told his listeners back then to avoid a company called Wayfair, a retail company whose stock later fell by 59% by March 2020 (he doesn’t reveal whether the coronavirus market crash that happened around that time had anything to do with this depreciation).

In another instance, Jeff told his followers to avoid a Chinese education company called GSX Techedu that had gone up by 500% in the previous year. It later shed 72%.

As he gives those examples, he wants you to take him seriously when he says that you should close your positions in certain stocks because we are headed for a zero-sum market.

What is a Zero-Sum market?

The “zero-sum” market is a phenomenon that is related to the concept of the zero-sum game. In a zero-sum game, for every win, there is a loss.

Therefore, in a zero-sum market, for every profit a trader earns, another sees a loss.

Dummies.com defines a zero-sum market as the environment in which day traders operate. It states that day-trading is a zero-sum endeavor where there are exactly as many winners as losers. The definition goes on to state that options and futures markets, which are particularly popular with day traders, are zero-sum markets because if a trader holding an option makes a profit, the one who wrote it loses the same amount.

Considering that line of thinking, I think Jeff Clark is referring to the options market as a zero-sum market.

I think that is the case because he is a big fan of options trading if presentations like The Gold Stock Retirement Blueprint and The 5 Minute Money Multiplier are anything to go by.

Jeff claims that he will further explain how an upcoming zero-sum market can help you double your money this year. Basically, Jeff Clark he will provide you with insights about the best moves you should make.

Who is Jeff Clark?

Jeff Clark is an editor of financial newsletters.

He is the editor of investment advisories such as Jeff Clark Trader and Delta Report, both of which he publishes via his firm. Before he started offering them, he was an editor at Stansberry Research where he published The Short Report and Pro Trader.

Jeff openly says that the advice he gives depends on the market situation. He is open to both conservative and speculative approaches because he will share with you short- and sometimes intermediate-term moves in the market if he thinks that the conditions are perfect for either.

Jeff Clark’s unique strategy allow you to make money irrespective of the conditions in the stock market i.e. irrespective of whether it goes up, down, or just stays the same. That’s why he is considered to be one of the best traders around.

Jeff Clark Trader is his introductory options service. Through it, he writes about option trading fundamentals and lower-risk trades for individual investors.

To participate in Jeff Clark’s Traders Paradise event, you must complete the registration process first. You can register simply by providing your email address and mobile number. Once signed up, you will receive a copy of Jeff Clark’s newest report i.e. Why 2021 Is a Trader’s Paradise.

Why 2021 Is a Trader’s Paradise will provide you with an overview of where the market is going next and what are the exact steps you should follow to optimize your trading.

You also have special access to a 3-part video series…

What’s more, you will get a Behind-the-scenes intro to Jeff Clark.

I think Jeff Clark’s Trader’s Paradise event is legit because it is offered by a credible analyst.

Jeff Clark’s track record since 2005 has been great because subscribers have had the opportunity to earn triple-digit returns over 50 times and double digit returns more than 160 times.

Jeff has also had a storied career where he has worked for a firm that manages money for the wealthy. In fact, he says that he is taking the trading principles he learned while doing that and applying them to his advisory services.

That being said, Jeff Clark’s advice should be taken with a grain of salt because there is always the possibility that he will get some or all of his predictions wrong.

Jeff Clark has come up with this special event in order to alert people to where he thinks the market is moving and what stocks you must avoid now. In addition to that, he reveals the trades you can invest in.

It all stems from what he refers to as a zero-sum market. He says that it is going to be a major event that will affect people’s investments and that they should act as fast as they can if they haven’t already.

That being said, the market is not totally predictable and although Jeff may be onto something here, you should not just follow everything he writes about blindly. Remember, he is not offering personalized advice here because his is general advice.