17 Minutes To Wealth is the latest scam system I’ve come across, so today I’m sharing all the details and exposing it for what it really is. Don’t get sucked into the “17 minutes” BS as that’s just a marketing tactic to suck you in. Keep reading below and I’m going to share all the details on how this works and why you should avoid it.

17 Minutes To Wealth – The Truth

When I first came across the 17 Minutes To Wealth website my initial thoughts were that it’s another make money scam system similar to Massive Internet Profits and the Affiliate Millionaire Club however as it turns out this system is a little different. It’s actually a system that promotes the Mobe opportunity from Matt Lloyd which is a well known online business system that’s been going around for a few years now. It’s quite strange though because it seems that the creator Matt is quite happy for some of his affiliates to create really scammy looking websites like 17 Minutes To Wealth to promote his system. Even though these scam websites flat out lie about what it takes to really be successful. 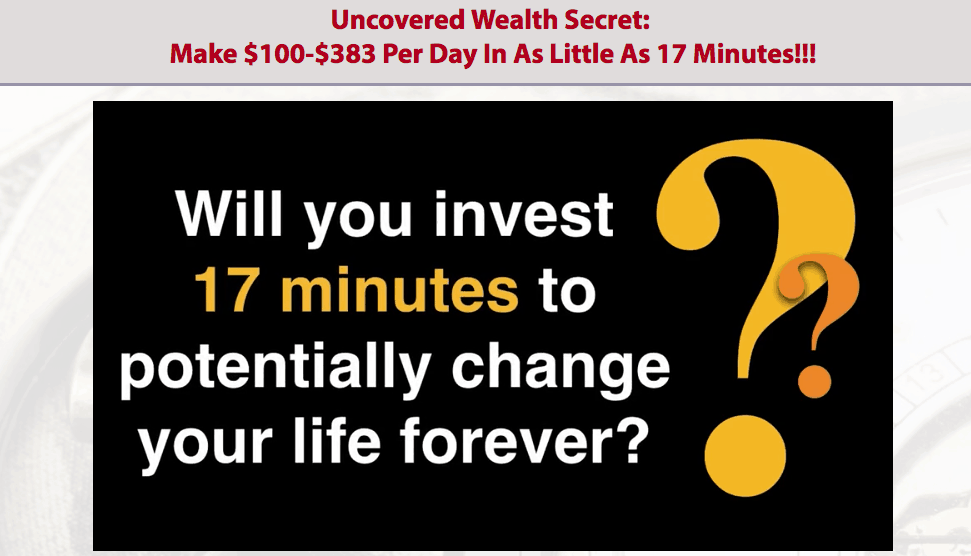 One example of these scam websites is Online Profits Breakthrough which I recently reviewed. The reason I call this out as a scam is not because I believe that Mobe the business opportunity it promotes it a scam but simply because it lies. And this seems to be a common theme amongst a select few affiliates for Mobe, it’s as if Matt Lloyd the founder of Mobe is turning a blind eye to it. Perhaps he thinks the ends justify the means, in other words it’s ok for his affiliates to lie to make sales because he feels that he is providing a good product in the end.

Mobe was started a few years back by Aussie entrepreneur Matt Lloyd. Matt realised that the big money online was made with something called high ticket programs. Essentially you make a lot more money selling high priced products than you do selling low ticket items like e-books. So he created Mobe, an educational company with an income opportunity attached. Mobe teaches people how to do digital marketing, specifically how to do affiliate marketing and offers customers the chance to become affiliates of Mobe where you can earn high commissions reselling the products.

If you went into a car showroom to buy a car and the salesman sold you on buying a certain model of car because it had a big powerful engine but was also really economical but then you got home after buying it and realised the engine was small you’d feel mis-sold right? Even if the car was really comfortable, was economical and a generally nice car you’d still feel like the salesman wasn’t being honest to you. In my opinion that is what is happening here with 17 Minutes To Wealth. The owner of this website is basically lying to you about how much money you can make with Mobe and making it sound easier than it is.

In my opinion that makes 17 Minutes To Wealth a scam because it’s not very trustworthy.

In my opinion 17 Minutes To Wealth is a scam because they are lying to you in order to sell you the Mobe opportunity.

I don’t believe that Mobe itself is a scam, however if you join because you think you can make $1,000’s a day in just 17 minutes like the 17 Minutes To Wealth website claims you can then you are going to be disappointed and only end up losing money.

Before you leave, if you’re sick of scams and want to see a real solution for making money check out my recommendation…