The Accelerated Wealth Summit is an event hosted by Louis Navellier at InvestorPlace that has been getting a lot of attention.

At the event, he will unveil a proprietary stock research system that he claims will lead him to the market’s biggest winners long before Wall Street mainstream media catches wind of them.

Since they have been building it up, I took it upon myself to find out what it is about and in this review, I will highlight what you should expect from the event if it piques your interest.

Introduction to The Accelerated Wealth Summit

The Accelerated Wealth Summit is a virtual event by Louis Navellier. The summit will take place on 19th May 2020 at 4 pm ET and it will be an online event. 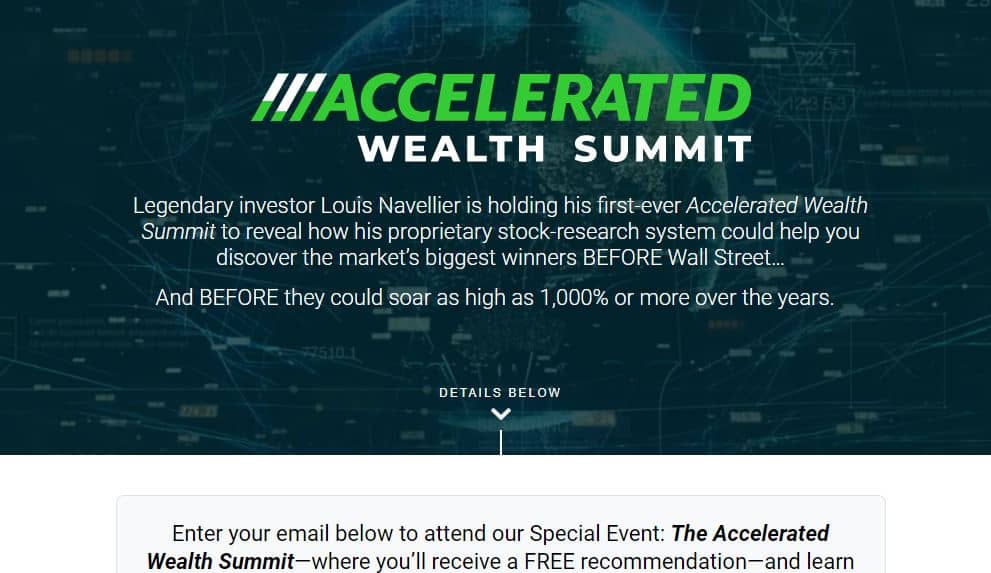 As I’ve mentioned in the introduction, he will discuss his proprietary stock research system that he claims can spot the market’s biggest winners before Wall Street and before they soar as high as 1,000% in a few years — implying that the strategy is inclined towards long-term investments.

He will probably be talking about growth investments, which he is well-known for. These are small companies that have the potential to grow exponentially over a long period, usually years.

His most popular newsletter, the Growth Investor, is all about growth investments. In addition to that, he will also talk about his favorite stocks.

Louis Navellier is a professional trader, money manager, and newsletter editor. He is the chairman and founder of a wealth management firm called Navellier & Associates in Reno, Nevada where he and his team manage approximately $2.5 billion in assets. He is a quantitative analyst, which means that he designs trading algorithms to aid in his market analysis.

He is one of the editors at InvestorPlace where he heads up a couple of advisory services. As of writing this, he is the editor of Growth Investor and Accelerated Profits among other newsletters.

What will Navellier discuss at the Accelerated Wealth Summit?

If you wish to attend The Accelerated Wealth Summit, you have to sign up for it by submitting your email address at the landing page. Once you enter the email address, you will receive updates regarding the event. It is free to attend and you don’t have to be a subscriber to an investment advisory service by Navellier to be eligible.

Earlier this year, Louis Navellier released a video warning his listeners about a global phenomenon he was referring to as the Technochasm. He describes it as the “ripping apart of the economy and the stock market.”

As the Technochasm was happening, he says that only a small group of in-the-know people were building wealth which 99% of Americans are struggling to get by. He will share an update on how that is going and how investors can adjust to the new reality.

Besides that, here are some of his other talking points:

Navellier will reveal more details about the proprietary stock-picking system he uses to pick the winners and losers of the Technochasm phenomenon as well as show you how to double your money at least 6 different times over the next 12 months.

Is The Accelerated Wealth Summit Legit?

The Accelerated Wealth Summit is legit. It isn’t the first summit Louis Navellier is hosting because he regularly hosts these webinars to talk about his investment strategies as well as promote his newsletters.

Once you register for the online summit, you will receive further instructions on how to attend the virtual event. During the summit, Navellier will reveal the best growth stocks picked by his proprietary trading system.

The Accelerated Wealth Summit will, besides reveal Navellier’s trading strategy, advertise one of his newsletters. He will probably offer a discount to new members as he’s done countless times before when promoting his other newsletters.

Since it is free to attend, you should attend it to see what Louis will be talking about. You don’t have to sign up for his newsletter if you don’t find his investment approach appealing; that being said, you may gain value from listening to his perspective.

If you can’t attend the event as it happens due to time zone differences or any other reasons, you shouldn’t worry about that because he will publish a recording of the event and let you watch it for free online.