In the pitch, Graham claims that there is an upcoming financial extinction event that will devastate the economy leading to 25% unemployment rate, widespread bank failures, and a 70% stock market decline. He also says that he has the remedy and is willing to share it with a few people.

Is what he is saying valid?

Well, after sitting through the pitch and doing some research, I decided to write this review to provide you with a summary of what he covers as well as give my opinion on whether I think it is legit. Keep reading to learn more.

But before he gets to that, he goes on a tirade talking of how the Federal Reserve hasn’t been doing right by America’s working and middle class. He says that whenever the economy is in decline, its actions always favor the rich leaving the rest of the population worse off. 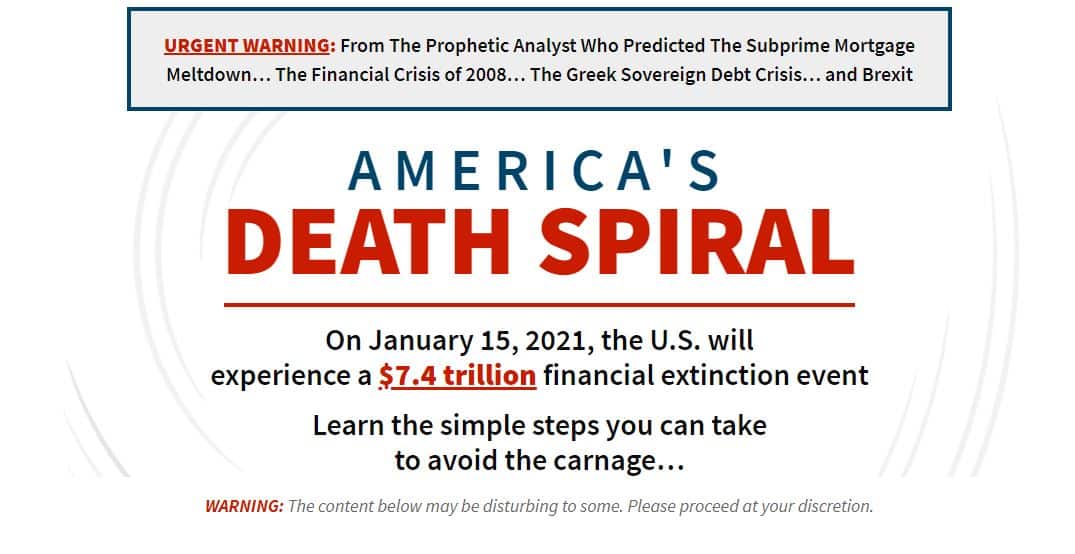 He recounts how during the Global Financial Crisis, which he says he predicted, the Fed slashed interest rates to zero, bailed out big banks and corporations, and instituted other measures to prop up the economy.

But as well-intended as those policies were, they ended up helping the “Wall Street elites” line up their pockets and very little trickled down to the economy. As a result, the stock market roared and inflation went up but at the same time, wages were barely rising or stagnant and people’s spending power diminished.

Consequently, people had to work even harder to survive and they took on more debt. He says that debt levels, both personal and corporate, have risen exponentially leading up to the current economic climate and that it is setting the scene for a financial catastrophe.

He tells us that all that was needed was a catalyst and the coronavirus pandemic has been the perfect one. He says that it has set the catastrophe, which he calls America’s Death Spiral, in motion.

This will be characterized by a stock market crash by up to 70%, high inflation, personal and corporate bankruptcies, and social unrest.

He says that it will culminate in an event in January 15, 2021. By this, he is referring to the realization that the economy is in bad shape when the three biggest banks release their earnings reports around that period. The three are JP Morgan, Citigroup, and Wells Fargo.

Now, he says that you can prepare for this eventuality by implementing the “bulletproof” strategies that he has crafted to shield your family and assets from the chaos.

Who Is Behind America’s Death Spiral?

Graham Summers is the founder of the Phoenix Press at Three Founders Publishing, which is based in Baltimore, Maryland. He edits a few newsletters for the firm, including Alpha Currency Profits and 90 Minute Trader.

Graham Summers is a well-known name in the industry and has been featured on Fox Business, NBC News, Marketwatch, and CNN Money. In each of those appearances, Graham has shared his expertise on global financial and the effects of central banking on the markets.

Graham Summers has made a name for himself predicting some of the biggest financial events in recent history, including the global credit crisis in 2008, Brexit, and the Greek Sovereign Debt Crisis.

He is the author of a best-selling book called The Everything Bubble: The Endgame for Central Bank Policy.

How to prepare for America’s Death Spiral

If you wish to know how to overcome America’s Death Spiral, you have to subscribe to Strategic Impact; it is one of the investment research services that Graham Summers edits over at Three Founders Publishing.

Through it, he exposes little-known investment opportunities that can result from massive shifts in the financial system, as evident in the pitch.

Graham is a credible investment analyst who’s been providing investment insights to high net worth individuals, top-tier political advisors, hedge funds, and strategists of the largest financial institutions in the world.

He uses the event to share his findings and explain how we ought to prepare for it. However, that does not mean that he is right and that things will pan out as he describes them — even he acknowledges that.

Therefore, although he sounds fatalistic, he is merely giving his opinion and there is nothing wrong with that.

Graham Summers spends most of the presentation describing how badly the economy will be affected by the pandemic and how the Fed has implemented policies that aren’t really helping things. He claims that people and businesses are deeply in debt and may go bankrupt.

This will then lead to a financial catastrophe that will become apparent on January 15, 2021 when the big banks reveal just how bad things are.

He wants us to prepare for that by implementing his strategies that he is only making available to those who subscribe to his newsletter, Strategic Impact. You could say that this is an elaborate marketing campaign for the newsletter.

That being said, you should only subscribe to it if you are sure what you are getting yourself into. Fortunately, if you are not satisfied with it, you can always ask for a full refund within the first six months of joining.