Looking for a review of Bitpetite?

Bitpetite is growing fast and being promoted by a number of different people but can you really trust it? Or is this another ponzi scheme that’s profiting off the hype surrounding Bitcoin?

Today I’m sharing my honest review and opinion on Bitpetite.

So after landing on the Bitpetite website I was initially quite impressed by the design and how it all looks. It seems like a professional website indeed however looks can be deceiving and that is exactly why I’ve decided to put together this review. There are a lot of Bitpetite reviews out there but to be honest non are telling you the real story.

You see despite the professionalism of Bitpetite there are a few things you need to know which I will explain.

To me it looks pretty similar to 3 other opportunities out there which are Bitconnect, Bitcoins Wealth Club and Power Mining Pool. You can go to any of these 3 websites and they are all telling you the same kind of thing.

That Bitcoin is huge (which it is) and now is your time to profit. All you need to do is sign up for free, invest Bitcoin and let them do all the hard work and heavy lifting for you.

Of course they make it sound easy because they want you to sign up but there’s a few fatal flaws. I won’t get into the details on the other opportunities since I have already reviewed them so let’s stick to just Bitpetite for this review.

I received an invitation to join Bitpetite so decided to take a closer look.

Bitpetite presents itself as a legitimate money transfer service for Bitcoin however when you dig a little deeper you start to see what this business is really all about, and that is making money from people investing Bitcoin. Dare I say it looks just like a ponzi scheme. Ooops I said it!

Take a look at this image below: 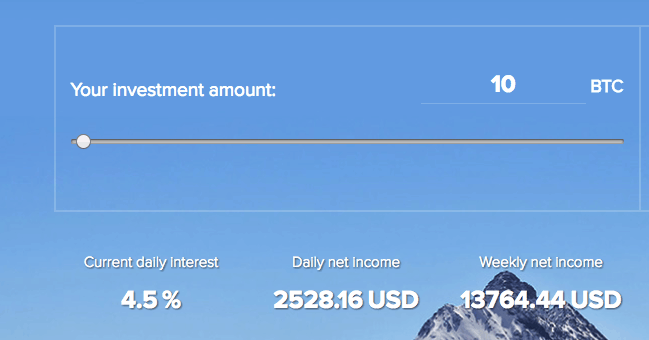 Let me quickly explain this image in case you don’t understand.

This was a screenshot I took of the Bitpetite website and it shows how much daily interest you can make if you invest Bitcoin. In the above example the investment amount is around 10 Bitcoin which is a fairly substantial amount of money as currently that would cost you around $60,000 however the daily net income from that investment is $2528 as shown.

That means you are earning a weekly income of over $13k so you would soon see your original investment returned.

Is Bitpetite A Scam or Not?

They say that when you invest they use that money to help their business run and share a percentage of the profits. However if you believe that you are most likely naive or a newbie to this kind of business.

After reviewing over 300 systems and exposing many as scams to me Bitpetite is quite simply a ponzi scheme. The “daily interest” is being generated by new members signing up and investing Bitcoin. That is really how these kind of businesses operate and they will try and tell you the money comes from business profits or “trading” bitcoin but it rarely does.

There are a few big warning signs for Bitpetite that I feel I should mention. These are not conclusive reasons to judge a program or business as a scam however it’s worth taking note that when certain people get involved in these kind of businesses who have a history of being involved in scams and ponzi schemes you should probably be cautious.

I received an invite from someone who was the biggest promoter in a company called MyAdvertisingPays which ended up collapsing last year. It was a business that paid a set amount of % based on how many advertising packs a person owned.

The theory was that the company made money from advertising and shared their profits back with the users however this was never really the case. There was no genuine advertising revenue, the ad revenue actually just came from people signing up to the business opportunity and viewing ads.

Ultimately when the promoters started to slow down and banking problems arose the company collapsed.

I can easily see the same thing happening with Bitpetite and other programs like it however people will come off MUCH worse when this happens because Bitcoin and cryptocurrency is essentially untraceable!

I would personally stay well away from Bitpetite. As I have explained I think it’s just another ponzi scheme that’s jumped on the Bitcoin bandwagon and using the hype to try and sell their opportunity to you.

Rather than waste your time on these hyped up systems that rarely deliver I recommend taking a look at my no.1 recommendation below which is a genuine free training that can help you make money.