Welcome to my review of the 50x Gold Bull Market.

InvestorPlace recently released a presentation in which Eric Fry talks about gold being bullish enough to generate 50X returns. He even claims that it is the most shocking discovery of his 30-year career.

If you’d like to learn more about the presentation, I put together this review to share a summary of the key talking points so that you can better decide whether Eric’s proposals are worth your while.

Eric Fry recently released a presentation during which he said that he believes that gold will be bullish for the foreseeable future.

So far, gold has had a solid year in 2020 and bulls like Eric expect this to carry on in the short term at the very least. He even mentions that it could reach $10,000 per ounce if it continues on its current path. 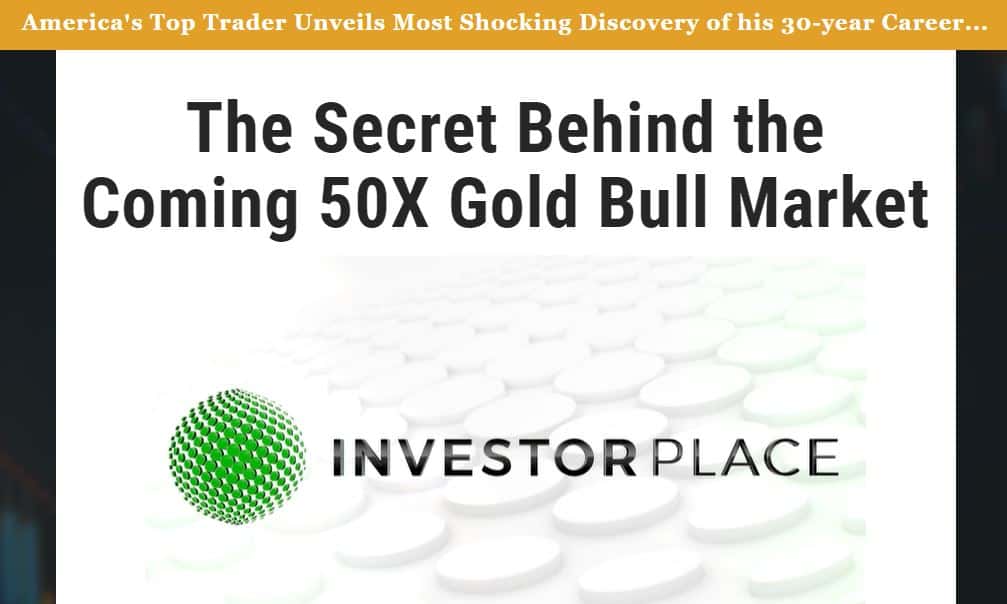 Many other gurus agree with him (about precious metals being a good investment in the current climate). Just this year, I have reviewed presentations like Downfall 2020 (Andy Snyder) and The Next Great Gold Bust (Harry Dent) that corroborate Eric’s outlook.

Eric Fry believes the stage is set for a massive gold bull market. The factors that he is considering include:

Now, rather than invest in things like gold coins, ETFs, mining stocks, or bullion, he has chosen to invest in Royalty Rights on gold mines.

A gold royalty is a contract that gives its holder the right to a percentage of the gold revenues or some other compensation in exchange for financing. Mining companies use them to finance their operations.

These royalties can be traded in a secondary market (such as what Eric is proposing) and in this way, they allow investors to diversify into gold.

Who Is Behind the “50x Gold Bull Market” presentation?

Eric Fry is an investment analyst who is also a specialist in international equities; he has been active since the 1980s. With regard to his international investment strategy, he favors short-selling.

Eric has also been a professional portfolio manager for more than ten years.

In 2016, he took part and won an investment competition that pitted him against other money managers.

Eric edits a couple of newsletters at InvestorPlace, including Fry’s Investment Report, Smart Money, and The Speculator.

He has also written a book called International Investing With ADRs: Your Passport to Profits Worldwide.

Eric has identified one royalty contract that belongs to a small company that (at the time of publishing the presentation) was trading for $5.

He wants you to invest in it because he thinks it has the potential to 50X your investment.

If you would like to learn more about it, you have to read his report called Three Ways to Play the 50X Gold Bull. In it, he has also included two other companies that he is recommending.

To get your hands on the report for free, you have to sign up for his newsletter, Fry’s Investment Report.

It is a monthly advisory service through which he discusses the next big trends and ways in which to make the most of them.

When you join it, you will also receive:

You have 90 days to try out Fry’s Investment Report risk-free.

Eric Fry is a legitimate investment guru who’s been in the finance industry for a long time. During his career, he has shared many investment recommendations, some of which have been successful, others not as successful.

Whether his prediction regarding the gold market will come true is something that we’ll have to wait and see because there is no way of verifying that.

50x Gold Bull Market is a presentation touting Fry’s Investment Report. Eric believes that there will be a gold bull market that will be triggered by a falling US dollar due to the downward pressure resulting from inflation.

He believes that the best way to cash in on the bull run is to invest in gold royalties. You have to subscribe to his newsletter to learn more about investing in them though.

Most of what he says regarding gold has been vindicated by the price of gold in 2020 which many analysts attribute to the high demand; many investors want to diversify and see it as a good hedge.

That being said, before you follow his advice, do more research and ensure that you are comfortable taking the risks.