Marijuana is one of the fastest growing industries global stock markets have ever seen.

In just a few short years, the global marijuana market is expected to exceed $50 billion in value.

Marijuana is illegal in most parts of the United States and the world. As such, this recent explosion in the value of marijuana stocks has caught many financial experts off guard, with various analysts imputing the trend to the fact that opinions surrounding the consumption of Marijuana for medical and recreational purposes have changed drastically over the years.

In this article we’ll get into more details on Marijuana Penny Stocks and share what you need to watch in 2018.

If you’re looking for a real solution for making money in 2018 check out my no.1 recommendation.

It goes without saying that shifting patterns in the legal status of Marijuana in the United States are largely driving the rise in the value of global Marijuana stocks. When California became the first state in the United States to legalize the use of medical cannabis for compassionate purposes, the parties fighting that particular battle did not fully comprehend the consequences of California’s decision, at least not until 2013. 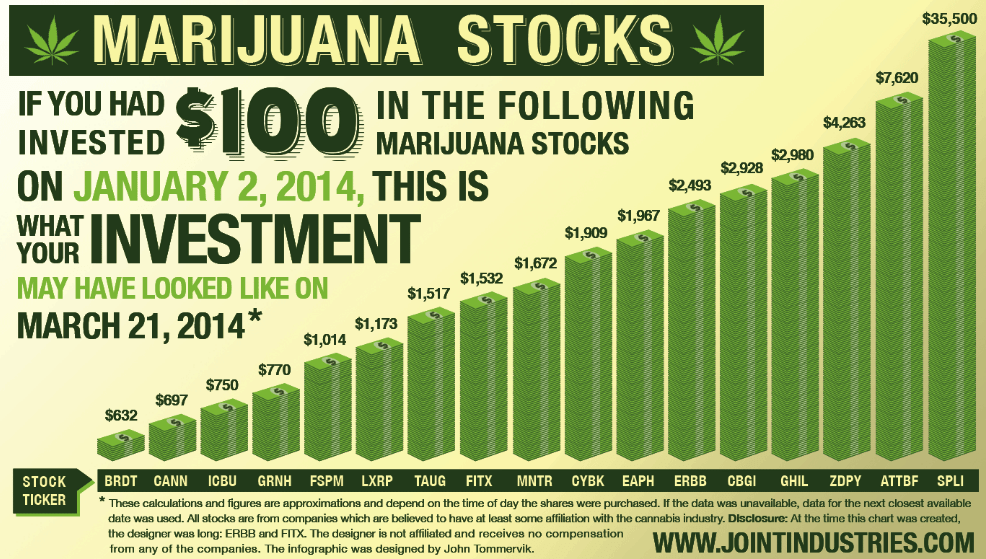 In was in 2013 that a memo issued by the Justice Department compelled law enforcement personnel in places like Colorado and Washington to stop enforcing federal drug laws, this in response to a ballot decision in those states that had relaxed the restrictions surrounding the use of Marijuana for recreational use.

By 2016, more than half a dozen states around the United States had voted to legalize the use of marijuana for medical and recreational purposes. Is it any wonder that so many investors are fighting tooth and nail to get in on the Marijuana action?

With over sixty million American currently living in places where Marijuana can be legally accessed, no other industry is experiencing growth quite like Marijuana.

Before we jump into the details regarding why this is happening I’d like to quickly mention some of the other articles we have done recently on investment newsletters. We have been researching a number of investment newsletters such as Total Wealth Insider, Kenny Accounts and Strategic Intelligence by Jim Rickards. If you’re interested in learning real strategies for investing then be sure to check out these newsletters before you leave today.

Despite the boom the industry has experienced, the marijuana trading market is primarily populated by smaller industry firms. These are companies with small market shares that are incapable of trading on prominent stock exchanges.

As such, they tend to favor penny stocks which are basically stocks that trade below five dollars a share. Trading with penny stocks takes place on the over-the-counter market where disclosure requirements are very relaxed.

If you follow the financial news, then you know that Marijuana Penny stocks have seen unprecedented growth in recent months and years. However, the volatility of penny stocks has stoked some concern amongst financial investors with a leaning towards marijuana.

Marijuana Penny stocks can prove tricky to utilise for some people, especially if they are new to the stock trading business. When it comes to Marijuana, here’s what you need to know.

Marijuana is illegal in the United States. Some states might have legalized its use, but the plant is still classified as a Schedule 1 narcotic by the federal government. For this reason, many serious marijuana stock investors do most of their trading in Canada where Marijuana use is all but legal.

However, a lot of financial activity still takes place in the United States. However, because Marijuana use is illegal, most of the Marijuana companies whose stock you might want to purchase are ancillary. In other words, they will study Marijuana, package it and even deliver it but they will never touch the actual plant. That way they do not violate federal laws.

New investors are normally encouraged to carefully scrutinize their stock options to find companies that can effectively walk that fine line between trading in marijuana stock and staying within the confines of federal law.

There’s little point in buying the stock of a company that runs the risk of being shut down by the federal government because they broke federal drug laws.

What About The Scams?

Even though marijuana is still illegal in the United States, marijuana penny stocks are not a scam. However, you have every reason to worry about scams. Because of the recent legalization of Marijuana use in multiple states, a multitude of companies have exploded onto the market, offering massive gains for anyone willing to invest in the pot business.

Unfortunately, most of these firms have yet to undergo proper vetting. So unprepared investors could fall prey to pump and dump schemes. While marijuana penny stocks are not scams in and of themselves, the arena is definitely littered with scams.

Marijuana Penny stocks are definitely exploding in value. And there’s a lot of money to be made for investors that purchase cheap stocks now before the rest of North America legalizes Marijuana use and the industry finally takes off, unrestricted.

But it is important to remember all the risks surrounding marijuana stock. At the end of the day, marijuana is still illegal in most parts of the world and any new laws restricting the sale and use of the substance will make it even harder for even the largest firms in the pot business to operate.

And that isn’t even taking into account funding issues. Try to remember that most banks will not do business with companies operating in the marijuana arena. You do not get tax deductions on marijuana stocks and the regulations surrounding penny stocks are so lax that the chances of falling victim to a scam are pretty high.

I hope you have found this article on Marijuana Penny Stocks interesting.

Ultimately any form of investing carries risks and shouldn’t been seen as an easy way to get rich quick.

If you’re interested in generating a more reliable income then check out my “no.1 recommendation” below.

If you’re looking for a real solution for making money in 2018 check out my no.1 recommendation.