Today we will be taking a look at a presentation released by InvestorPlace called Matt McCall’s Four Solar Stocks to Financial Freedom.

The general idea behind it is that Matt expects the solar industry to grow exponentially in the next few years and he has identified four companies he thinks you should consider adding to your portfolio to secure financial freedom.

In this review, I will give you an overview of the pitch to enable you to find out what companies he is alluding to.

Matt McCall, who considers himself “America’s #1 tech futurist,” believes that with solar energy becoming cheaper than fossil fuels for the first time in 66 years, there will be a “$55 trillion takeover of the global energy sector.” Consequently, solar stocks will become appealing to investors and he has identified four companies that he expects to do particularly well. 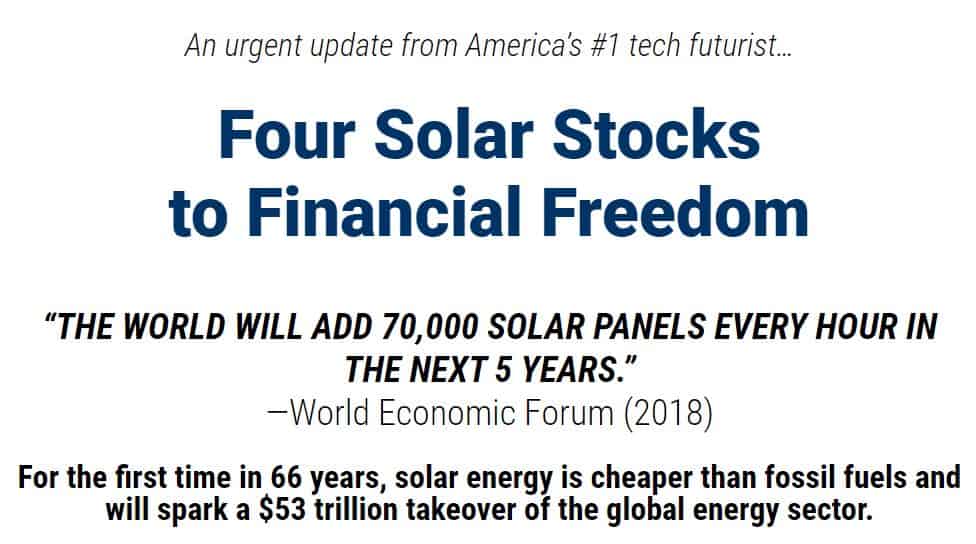 He says that according to the World Economic Forum, the world will add 70,000 solar panels every hour in the next five years. This will be aided by the fact that solar energy is getting cheaper as the world strives to wean itself off fossil fuel energy sources.

He gives numerous examples of high net worth individuals and, surprisingly, oil companies and oil-producing companies plowing millions into renewable energy to cement the idea that solar is set to take off.

New technology that will ensure the massive adoption of solar energy by lowering costs factored heavily in him picking his four solar stocks.

The first company manufactures microinverters. It started producing them in 2008 and has the largest market share in the US. It has already shipped 30 million microinverters to over 20 different countries and has 300 active patents with big corporations. Its annual revenue in 2018 was $316 million. It doubled to $624 million in 2019 and reached $721 by September 2020.

These statements suggest that he is referring to a company called Enphase Energy (ENPH), which is a leading microinverter manufacturer in the US.

The second company is developing solar tech that will be used in electronic vehicles. There weren’t enough hints to decipher what company he was referring to thus you have to read his special report called Four Solar Stocks to Financial Freedom.

The third company makes power optimizers that supercharge solar panels individually and connect them to the electrical grid. In revenue terms, it is the top PV inverter supplier in the world. In 2019, its revenue was $1.42 billion.

The company that matches this description is Solar Edge (SEDG).

The fourth company on the list manufactures electric vehicles. Matt says that it is likely to become a trillion-dollar company this decade. Its annual revenue has gone up from $116 million ten years ago to $30 billion in 2020. It expects to see a lot of growth in China where it is spending a lot of money to grab a big chunk of the EV market share.

The company he is talking about here is Tesla (TSLA). Tesla is in the solar business because it acquired a solar company called SolarCity in 2016.

Who is Matt McCall?

Matt McCall is an investment guru and a member of the editorial team at InvestorPlace. His modus operandi is to look for tech companies that are likely to dominate different sub-sectors and recommend them to his subscribers. He is also into cryptocurrencies because he runs a newsletter called Ultimate Crypto.

Before he started writing newsletters, he was a high-powered broker for financial giant Charles Schwab seventeen years ago. Matt quickly managed to gain wealth, authority, and influence but realized that he wanted to do something different. He wanted to help retail investors make better financial decisions in the markets.

He has written two books on investment; The Next Great Bull Market  has been a bestseller for more than two years.

He has made more than 1,500 television appearances on networks like Fox News, CNBC, and BNN Bloomberg and been featured on publications like Bloomberg Business Week, The Wall Street Journal, and Investor’s Business Daily.

If you’d like to learn more about the four companies I just unveiled, Matt McCall wrote a special report called Four Solar Stocks to Financial Freedom. In this report, he reveals the names and ticker symbols of his four companies as well as further analysis into them.

You can get access to this special report for free by subscribing to his research advisory service, Matt McCall’s Investment Opportunities.

The main goal of this advisory service is to find the biggest, and potentially most profitable investment opportunities ahead of the masses. When you sign up, you will also receive a bonus report called Five Stocks That Could Soar During the Melt Up about investment opportunities that have the potential to soar by up to 2,000% and another called The Biggest Battery Breakthrough in a Century: How to Cash In on the $3 TRILLION Electric Car Revolution about investing in the electric vehicles.

Other benefits to joining the newsletter include…

Subscription Fee: A one-year subscription to Matt McCall’s Investment Opportunities costs $49 and it comes with a 90-day money-back guarantee.

Although Matt misrepresents some of the information in his pitch (for example, he keeps using renewable energy and solar energy interchangeably and they are different), the overall message is valid. Solar energy generation is cheaper than fossil fuel for the first time and there are people and companies who are installing it not because of environmental concerns, but because it is cheaper. Therefore, he is right to be excited about the industry.

However, that doesn’t mean that his stock picks are guaranteed to be big winners — but they are sensible picks.

Matt McCall expects the solar energy industry to grow significantly in the next few years helped on by a sharp decrease in the cost of solar PVs. He has identified four companies that he thinks you should consider adding to your portfolio for big gains. I successfully identified three out of the four and they are Tesla (TSLA), Enphase Energy (ENPH), and Solar Edge (SEDG).

Notice that the three companies are relatively big and are, in fact, market leaders in the industry. This means that Matt does not want you to risk your money on some startup that barely has a track record. These are well-known companies with certifiable track records and large revenue streams, which is commendable in a fledgling industry like solar because you don’t want to back a company that has massive debt and little to no revenue coming in.

That being said, remember that all investments bear risk and you should not invest more money than you are willing to lose.