Welcome to my review of Michael Carr’s Strike Zones.

Michael Carr recently released what he believes to be the best investment strategy for the next decade, and it is based on a trading tool called “Strike Zone.”

In the presentation, he explains how it works and how it can help regular Americans earn returns of 364%, 323%, and even 496% sometimes in just four days.

In this review, I will be going over the presentation and highlighting the key points raised pertaining to his investment strategy so that by the end, you can decide whether it is good enough for you. I will also give my verdict on its legitimacy.

What is Michael Carr’s Strike Zones

Michael Carr’s Strike Zones is the title of a webinar hosted by Corrina Sullivan featuring Michael Carr during which they introduce us to Mike’s new investment strategy; well, it is not new per se, but this is the first time he is revealing it to the public.

The presentation was promoted by Banyan Hill and by the end, you realize that it was all about promoting Michael’s investment newsletter, Precision Profits. 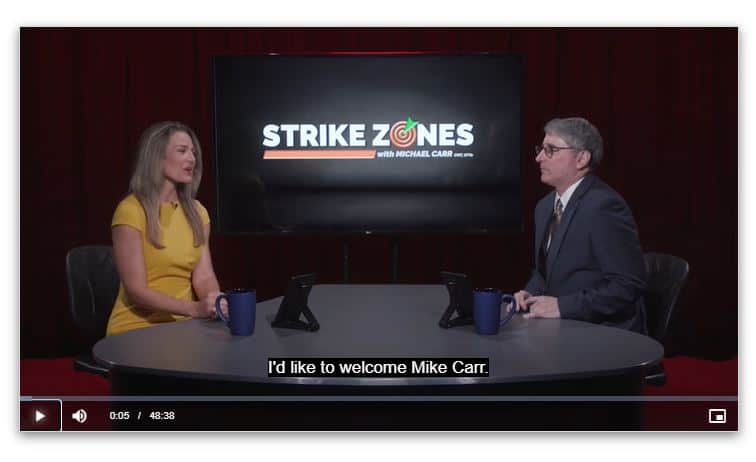 Michael is a retired US Air Force Lieutenant Colonel, and claims to have been heavily involved in various DARPA projects. At one point, he was the commanding officer of a team of nuclear missile architects at the height of the Cold War.

If you are unfamiliar with it, DARPA (Defense Advanced Research Projects Agency), the research branch of the Department of Defense, is behind some of the technologies that are crucial to our modern way of life. For example, The Internet and the GPS are just some of its many contributions to our civilization.

Carr was involved with the nuclear program and claims to have taken the same formulas that he developed for DARPA to launch nuclear war heads to develop a trading system that can indicate when a stock is likely to go up or down with an impressive level of accuracy.

He calls this trading system Strike Zones. He claims that while testing it on real trades, it has already helped his followers to record 105 winning trades.

He asserts that whether you are new to investing or are a seasoned expert, it can help you to double-digit and triple-digit returns.

Who Is Michael Carr?

Michael (Mike) Carr is a retired U.S. Air Force Lieutenant Colonel who now works as a full-time trader and writer.

When he retired from the Air Force, he went into the world of finance and now offers investment advice to Main Street investors. One way he does that is by publishing investment newsletters via Banyan Hill Publishing. They are Peak Velocity Trader, One Trade, and Precision Profits.

He is also a partner and lead advisor at FMP Wealth Advisers.

Mike is a Chartered Market Technician (CMT), a designation given to technical analysts; it is the highest certification within the industry and proves that the holder is well-versed in Portfolio management and other aspects of technical analysis.

The indicator comprises of a blue line and a dotted line on the chart. When the two lines cross, it means that a stock has entered “the strike zone” and one of two things happen: It either goes up or down.

When the blue line crosses above the dotted line, it soars: 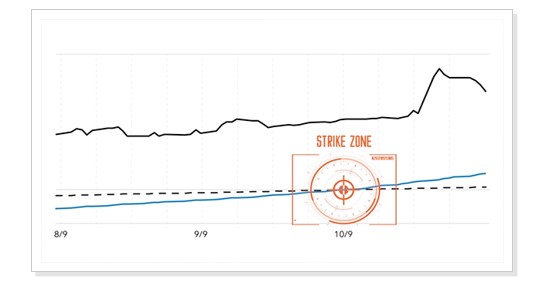 And when the blue line crosses below the dotted line, it plummets: 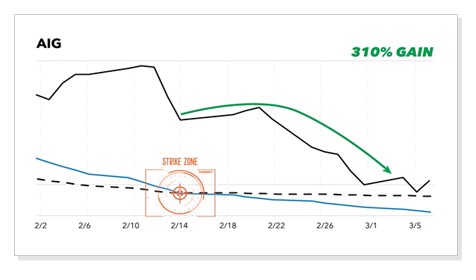 He doesn’t explain what the blue and dotted lines are because he says that that is proprietary information (and also too complex for us mere mortals to understand).

But, he does summarize the Strike Zone system into “the four rules of successful trading”:

To find the perfect stock, the algorithm scans through the market looking for stocks that have shown the pattern of consistently going up at the same time each year. It analyzes historical data going back 15 years.

Rule 2: Lock in the stock’s trajectory

Next, the system analyzes the stock’s trajectory and momentum. The ideal pick should be trading above its 26-week average.

Rule 4: Spot the strike zone and launch the trade

At this point, the blue and dotted lines cross paths.

Rather than trade the stocks, Michael Carr opts to trade options because they are cheaper, they earn greater returns, and you can make money whether the stock goes up or down.

You will gain access to Strike Zone trades only when you are subscribed to Mike Carr’s premium research service — Precision Profits. Every day, Mike will analyze the market and find the best possible trades.

On top of those benefits, the subscription also gives you access to The Precision Profits Model Portfolio, Mike’s options training library, the encrypted website, and Mike’s trading manual.

Michael Carr invented his investment strategy based on years of experience in the finance industry as well as skills he acquired while working in the Air Force. He is also a CMT, which adds to his credibility.

He doesn’t share all the details pertaining to his trading system and makes a lot of unrealistic-sounding promises about the system, but that doesn’t mean that it is illegitimate. Since he was working at DARPA, it makes sense that he may have been inspired by the nuclear targeting system while he was creating this trading tool; however, we can’t tell whether that’s how he did it because he is not very open about it.

With regards to his promise of 100% gains in a matter of days, take that with a grain of salt.

He is a CMT — which proves that he is a competent technical analyst — hence you can trust his insights. However, bear in mind that Strike Zones is not 100% accurate, no system really is. Also every investment strategy carries its own risk and this one is no exception.

In case you are dissatisfied with the investment strategy after subscribing to Precision Profits for one year, you can get an additional year of service for free or you get to choose any other investment service offered by Banyan Hill at no extra cost.