MrBeast is a popular YouTuber best known for creating content revolving around crazy stunts and spending outrageous amounts of money. He is also known for his generous donations and ambitious charitable drives.

If you frequent YouTube, you have likely come across one of his videos, which typically have catchy titles and thumbnails and millions of views.

In this article, we will be taking a closer look at MrBeast as we find out what he is all about, how much he earns, and what he is up to. 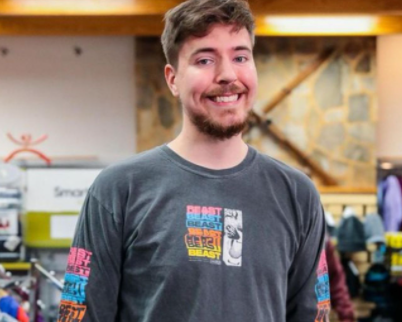 If you are a regular on YouTube, chances are you have come across one of his outrageous videos. Perhaps it was him putting 100 million orbeez in his friend’s backyard, buying a private island and then giving it away, or him spending 50 hours buried alive. All his YouTube videos have one thing in common, the are over the top and they get millions of views.

Since posting his first video he has grown his YouTube following and launched some impressive projects along the way.

MrBeast was born on in Kansas on May 7, 1998. For his high school education, he attended Greenville Christian Academy where he graduated in 2016.

He went to college but didn’t graduate because he dropped out shortly after joining and decided to pursue a different career path: content creation.

Jimmy Donaldson joined the platform in 2012 with his first YouTube channel, MrBeast6000. He was 13 back then when he did his first video and it was him playing Minecraft. That’s how MrBeast started his career. 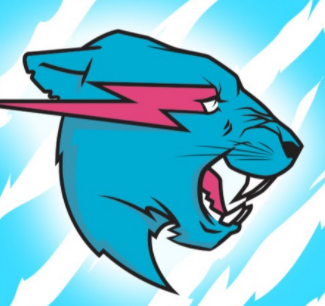 A few years after posting his first video, he decided to explore other topics that had nothing to do with video gaming. He started to regularly post videos with catchy titles like “Highest Paid Musicians????”, “Best YouTube Introductions”, and “Worst Memes And Trends On YouTube!”, just to mention a few. He also started commenting on YouTube drama.

Suffice to say, his new content made his YouTube channel more visible and he started gaining traction. By the end of 2016, he had 30,000 subscribers.

The First Video That Went Viral

MrBeast’s first viral video would set the trend for what he would come to be known for: doing something outrageous that required insane dedication.

The video titled “Counting To 10000 In One Sitting” ran for three and half hours and it was him filming himself counting to 10,000. 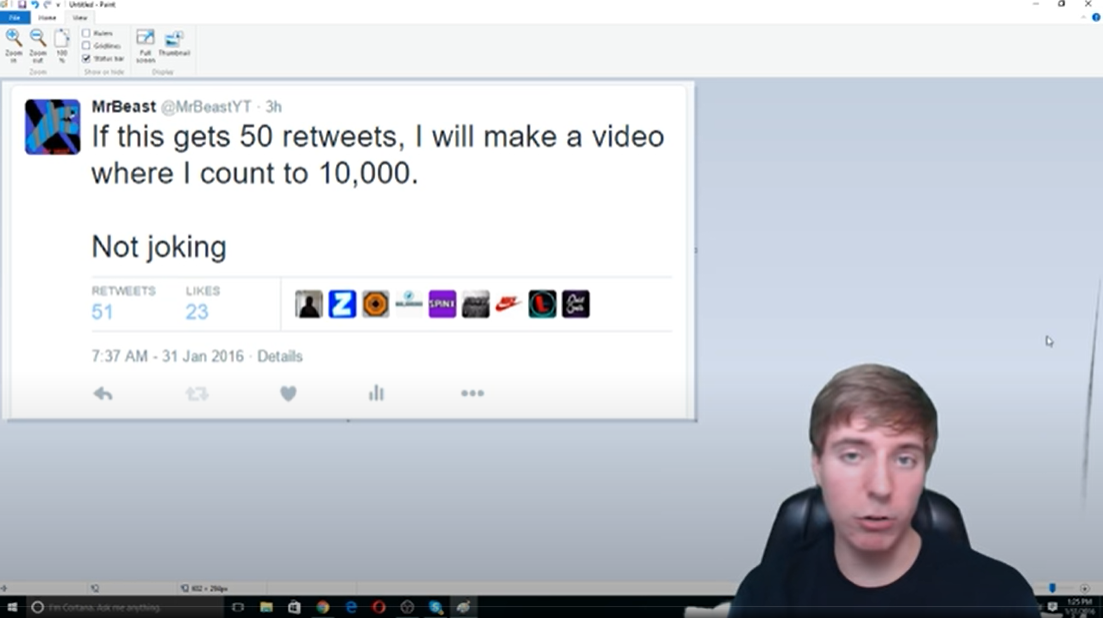 This video made Donaldson a YouTube star. After realizing why the video had so much engagement, he followed up with a video of him counting to 100,000 and another of him counting to 200,000. Following his viral videos, the channel subscriber base count reached one million in 2017. 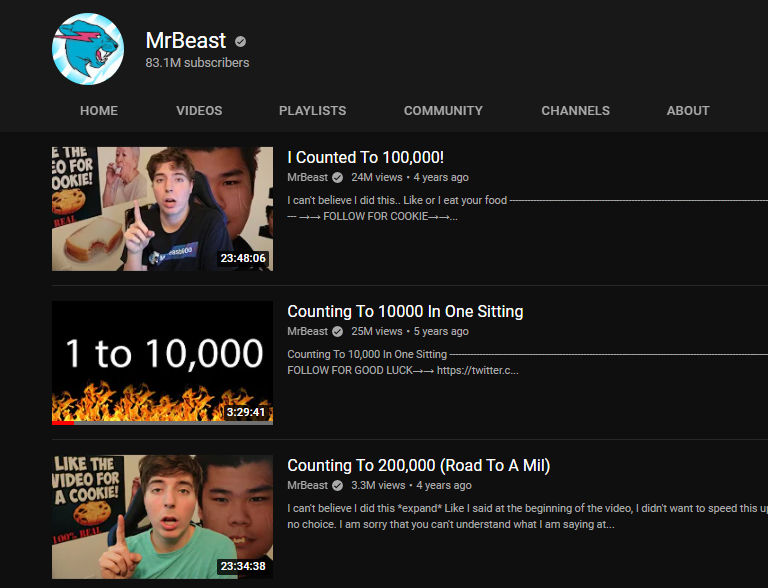 Soon enough, he was being offered lucrative brand deals and what followed set him on a path to unbridled success.

After getting his first brand deal, MrBeast gave away the entire first check to a homeless person and just like his counting videos, this sort of content exploded in views. When he got another brand deal, he gave a few thousand to multiple random people. After that, he donated more money to random Twitch streamers and then gave his pizza delivery driver a $10,000 tip.

His videos of him being charitable in outrageous ways made him into a YouTube icon. These acts of charity and generosity made MrBeast even more popular and he decided to lean into it:

He began doing outrageous stunts and filming them for his millions of adoring fans. Some of his crazy stunt videos include:

One prominent YouTuber was quoted saying that “There’s no doubt that watching someone waste a whole bunch of money doing something ridiculous with a whole bunch of things is fascinating.” He added “They’re so clickable because no one in their right mind would ever waste so much money doing these things unless they had an audience.”

That is as apt a description of MrBeast as anyone can make. He is arguably the original Junklord YouTuber.

Following the success of his first channel, MrBeast grew his YouTube presence by launching multiple channels. Every channel he starts has a purpose.

As of writing this, he has five other channels besides his main channel. They are:

All included, MrBeast has a large YouTube presence and is one of the most multi-faceted YouTubers on the platform. He has 154 million subscribers across his six channels with over 20 billion views.

What is MrBeast’s Net Worth?

If you’ve watched any of his videos, you realize that MrBeast spends a lot of money to produce them. Therefore, it doesn’t come as a surprise that MrBeast is a millionaire.

It is hard to estimate Mr Beast’s Net Worth because no outlet has a precise figure of how much he is worth. While some sources estimate his net worth at $8 million, others have mentioned that he is worth $16 million.

Forbes reported that in 2020, Donaldson earned $24 million, which was still behind the kid YouTuber, Ryan Kaji.

MrBeast has multiple sources of income, including his YouTube channel, brand deals, merchandise, and businesses. Let’s take a closer look at some of his main sources of revenue:

As I mentioned earlier, when MrBeast got his break, he secured brand deals with companies that paid him thousands of dollars. He gave away a lot of money in his videos but that helped him amass a following and even more sponsorships. He’s had collaborations with Apex Legends, Quidd (his first major sponsor), among other companies.

When he makes videos donating large amounts of money to individuals, many of these videos are usually sponsored by various companies. He has no trouble attracting sponsors because his channel has a massive following, tons of engagement, and he attracts eyeballs.

Google AdSense is the main avenue through which YouTubers with massive followings earn money off of their content. The higher the views and CPM (clicks per thousand) rate, the more money they make. In MrBeast’s case, he gets, on average, 11 thousand views per day. This in itself earns him a reliable passive income through the platform’s partner program.

Mr Beast launched a virtual restaurant called MrBeast Burger. A virtual restaurant does not own physical space where people go to eat. Instead, it exists on an online platform and uses a shared kitchen with another business where they cook the food. People order food (or in this case, burgers) online. 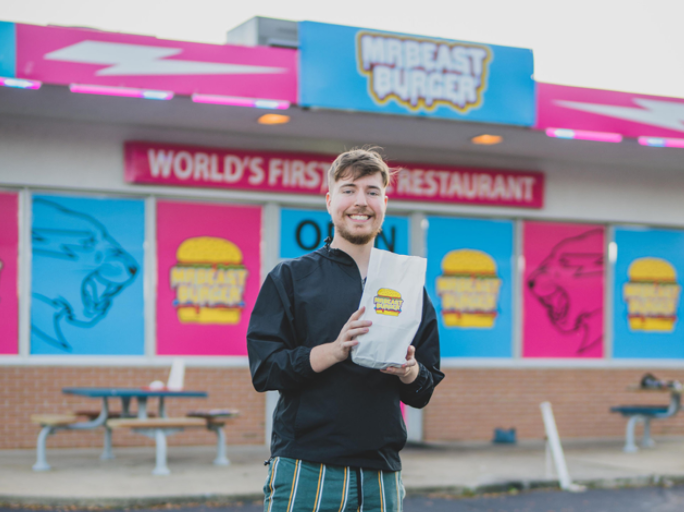 MrBeast Burger is a virtual restaurant that uses existing restaurants’ labor and equipment and they pay them a portion of the profits. The burger chain has partnered with over 300 restaurants and kitchens. Donaldson gives the restaurant his recipe, and they make the burgers for him. As of writing this, the restaurant features five burgers.

Donaldson sells branded merchandise through his online store, shopmrbeast.com. A quick browse through his products, and you’ll find t-shirts, hoodies, and accessories.

A major part of MrBeast’s character is his philanthropic nature. It is part of what made him relevant and gave him the platform to do every other project he has pulled off over the years.

Donaldson has given away millions of dollars in cash, expensive gifts, tips, and prizes to not just his friends, but also random strangers.

But all that pales in comparison to #TeamTrees and #TeamSeas, two charitable drives that he has undertaken in the name of environmental conservation.

Donaldson partnered with fellow YouTuber Mark Rober to start the #TeamTrees movement. The goal was to raise $20 million to support the Arbor Day Foundation. One of the stipulations was that they would plant one tree for every dollar raised, equating to 20 million trees. 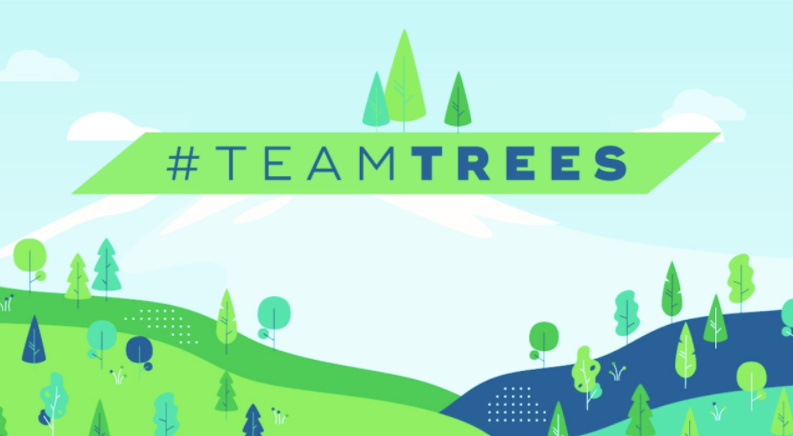 MrBeast raised the money he needed for the project with contributions coming from his followers as well as influential individuals like Elon Musk, Jeffree Star, and YouTube CEO Susan Wojcicki.

#TeamTrees celebrated its one-year anniversary in October, 2020 by showing the progress it had made planting trees across six continents.

Inspired by the success of #TeamTrees, MrBeast collaborated with YouTuber Mark Rober again to save the world’s oceans from pollution. The initiative is called #TeamSeas. 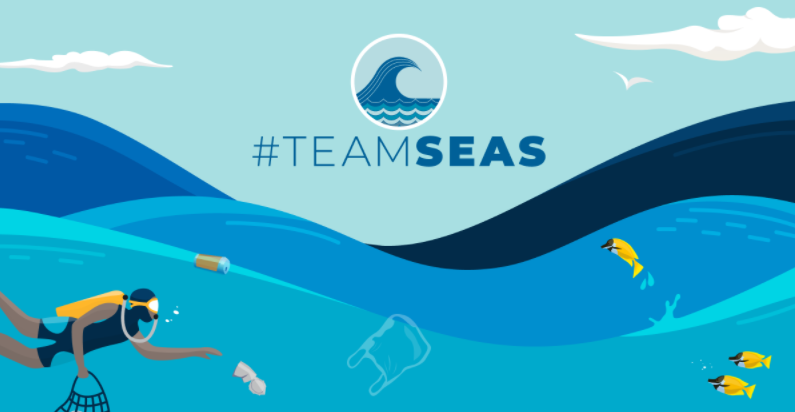 The goal is to raise 30 million U.S. dollars that will be used to remove 30,000,000 pounds of marine debris from the ocean by the end of year. Each dollar donated goes towards removing one pound of debris.

As I mentioned earlier, Donaldson recently started a channel called Beast Philanthropy pledging that all the proceeds would be donated to charitable causes.

The main beneficiary has been his food bank. He recently tweeted, “I’m dying to start up the new channel where 100% of all ad rev, merch, and brand deals will go towards running the food bank! I want to see how big we can grow this.” He has already secured a food bank warehouse.

Jimmy Donaldson has grown his YouTube presence through hard work, ingenuity, and philanthropy. As a result, he has become not just a guy posting crazy stunts online but a genuine force for good.

He has made a lot of money along the way (and given away most of it) and he doesn’t show any signs of letting up. From what he has shown over the years, he is more concerned with having fun and making a difference on the planet while at it than how much his net worth is.