Push Button Profits is a new system I’ve recently come across so I’ve decided to put together a review and share all the details. The question is can Push Button Profits really help you to make money or is it another misleading scam system? Let’s find out in my full review below.

Push Button Profits – What Is It?

When I first landed on the Push Button Profits (aka Push Button System) website I thought it was another scam system out to steal your money. Well maybe it is, but I’ll get to that further down the review. After I spent a few minutes taking a look I realised that I knew exactly what this system was about because I’d seen it all before, in fact I’d actually experienced it. Push Button Profits is just the name of the sales funnel but the real product and opportunity here is called Traffic Authority.

Traffic Authority launched back in 2014 and it’s a business opportunity based around selling traffic. When you sign up you are put through a series of training videos and shown how to buy traffic packages to promote your new business and then how you can earn 50% commission reselling these traffic packages. Essentially when you buy the traffic you can choose to send it anywhere you want however the real goal is to send it back to your unique link for Traffic Authority because then when people sign up (just like you did for example) they will go through the exact same steps you did, buy traffic and then you’ll earn 50% on the traffic purchases they buy. 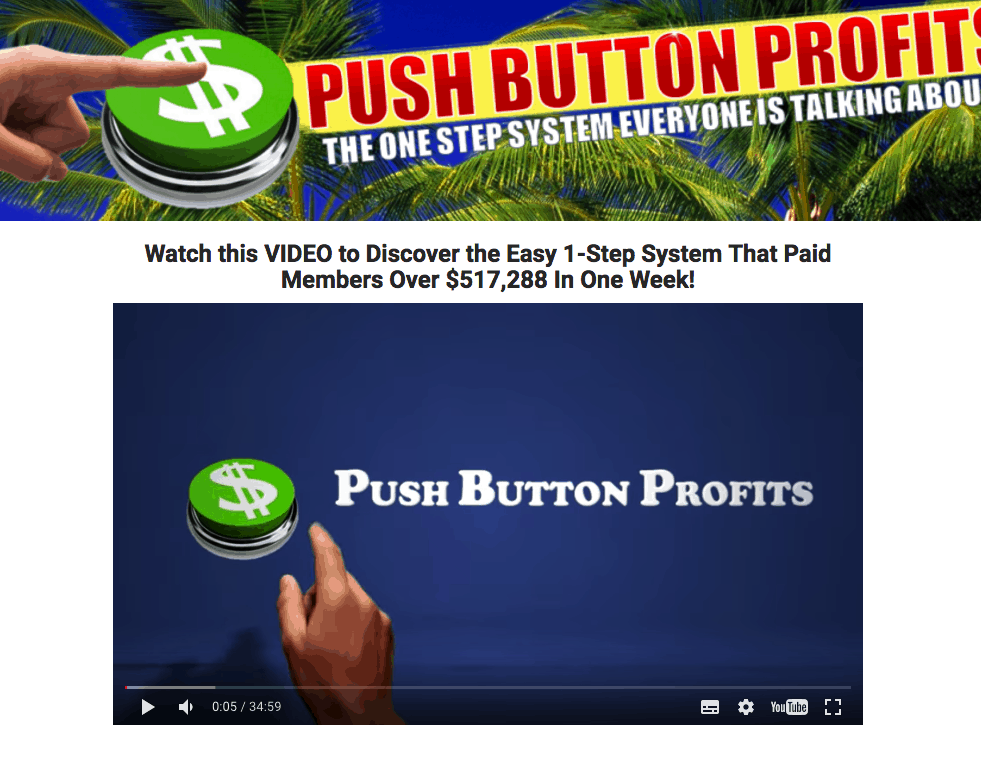 Is Push Button Profits A Scam?

The title of my review is “Push Button Profits – Misleading Scam?” so you are probably wondering why I would say that, and what exactly makes this a scam. On the face of things Push Button Profits and the business behind it (Traffic Authority) is not a scam. However I think it’s misleading and one could argue that it is actually a scam. Here’s why…. when you sign up to Traffic Authority (the business opportunity behind Push Button Profits) you are put through a series of training videos and steps which teach you about the business and how it’s important that you buy traffic so that you can build your business and also so you can resell the traffic packages to other people you refer.

This sounds great, and it makes perfect sense. The problem is when you actually start doing this you’ll soon realise that the traffic you are buying sucks and is ridiculously expensive. Yes you will earn 50% commission on the traffic that other people buy however there is a huge problem with this and I personally found this to be true when I was a member of Traffic Authority back when they launched a couple of years ago. The problem is the traffic is massively overpriced and the successful affiliates inside of Traffic Authority are NOT using this same traffic to actually drive signups and grow their business. So what actually happens is newbies perhaps like yourself who don’t know any better come in, buy the traffic packages assuming that they are going to get high quality traffic that converts, but they actually get sub-par traffic that’s overpriced and doesn’t even work as advertised.

Literally every top earner who has been a part of Traffic Authority has had success by driving their own traffic either via their own methods such as Facebook Ads, solo ads or most likely their own email lists. They have not had success from buying the Traffic Authority traffic packages. Unfortunately like I mentioned newbies don’t know this and they get sucked into it. And that’s why I’m calling it out as a misleading scam because whilst the premise is good it never actually works out because of the traffic quality. In my opinion this makes Push Button Profits (Traffic Authority) no better than the likes of 21 Step Millionaire Coach or Online Profits Breakthrough which also mislead people into joining a business opportunity.

Should You Join Push Button Profits?

If you are an experienced marketer who knows how to drive your own traffic then you could very well have success with this. After all I’ve seen first hand many people do this however will you really be comfortable selling something (e.g traffic) to other people that doesn’t actually convert and is massively overpriced? That’s really your call, and in this industry I see lots of people who are successful marketers make a ton of money promoting unethical products, but that doesn’t mean its right.

I’ve made my fair share of money online as an affiliate however in late 2016 I decided to take a stand, and create this blog No Bs Im Reviews to serve as an honest place to find reviews, and I vowed that I would only ever promote legitimate and honest products like my “no.1 recommendation”. So in my opinion you shouldn’t join Push Button Profits because even if you are able to drive signups and make money you’ll be doing it in an unethical way that doesn’t help the people you are referring to buy the traffic. Plus you’ll need to spend $1,000’s on the traffic packages in the first place to qualify to buy them.

I’m not recommending Push Button Profits as I don’t believe it will help you make money.