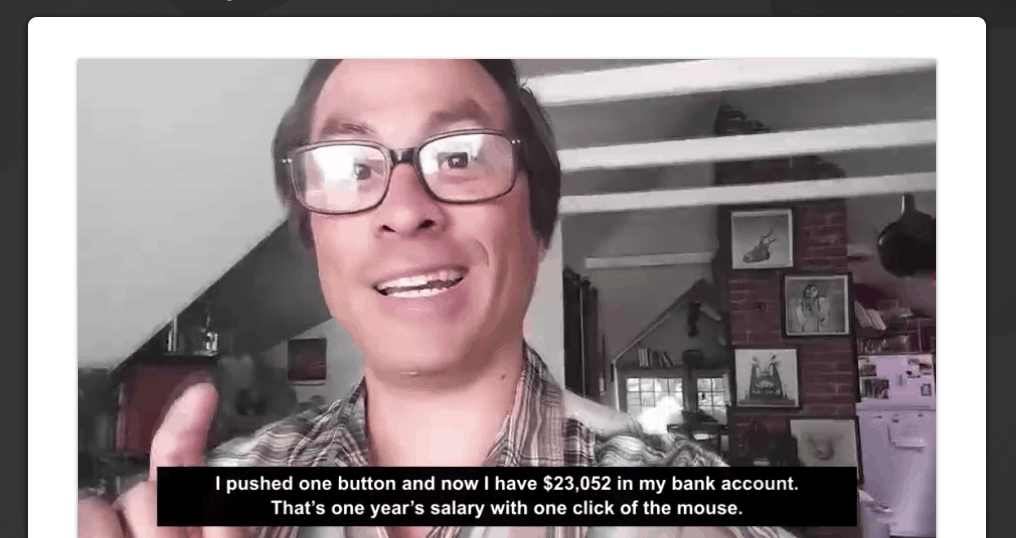 Push Button System is a new website I’ve been taking a closer look.

The website Push Button System makes some incredibly bold claims about how easily you can make money.

Sadly these claims are nothing but lies in order to sell you their system, so today I’m exposing Push Button System.

If you’re looking for the truth about this system then keep reading.

If you’re tired of scams and want a real solution for making money online check out my no.1 recommendation below.

It’s personally helped me to make over $150k in the last 6 months alone:

Here is what we’ll cover in this Push Button System review:

I heard about this system a few days ago and have just got around to giving my honest review and opinion.

To be honest Push Button System looks like a complete scam and is not something I would recommend.

That being said I will give an honest and fair review and tell you the real reasons behind my decision.

So let’s take a closer look to find out more and I’ll explain exactly what I think about it.

Should You Trust The Push Button System?

I personally believe you shouldn’t. For example look at this image below:

As you can see from the image above the video for Push Button System is extremely hyped up.

Within a few seconds of watching it this ridiculous claim came up on the screen which says that the guy pushed 1 button and had a years salary of 23k in his account.

It’s these kind of claims that make me instantly call this website out as a scam and to me it’s no different to other scam sites like Tesler System that make similar stupid claims.

Let me tell you, I’ve been making a full time income online for a few years now and during that time I’ve generated multiple 6-figures and over 7-figures in total sales revenue but it never happened from pushing a button.

It happened because I figured out how to actually drive targeted traffic to an affiliate offer and generate sales which in turn earned me commissions.

I have never in all my time online “pushed 1 button” and generated a lot of money and trust me when I say I have tried everything.

I have tested over 200 systems just for this blog and exposed many as scams that flat out do not work.

Push Button System is without a doubt one of the most hyped up systems I have ever seen and makes some of the biggest most ridiculous claims which will never happen in a million years.

As with many get rich quick scams what you are seeing with this system is fake testimonials being used in the sales video.

You might be wondering how in the world these people have made this much money and the simple truth is that they haven’t made it.

They have probably never made a penny online before with any of these kind of systems and the only way they make money is by selling fake testimonials.

The one above is an example of a fake testimonial as the person claims to have made $23k from pushing 1 button and below is another testimonial which is 100% fake:

The women claims that she’s made $25k and all she did was push one button too, she basically pushed the “Push Button System” hence the name.

The real truth is that this person was hired most likely from a website called Fiverr.

This is a website where you can buy and sell a number of different services and unfortunately one of those services is fake testimonials.

Unfortunately this service has been abused and scammers are using it to get fake testimonials for their products and services created.

What Is The Push Button System?

So now that I’ve shared my honest thoughts on the website what exactly is it and why should you avoid it?

In my experience reviewing 100’s of scams here at No Bs Im Reviews to me PushButtonSystem.com is quite simply another “get rich quick” scam. It has all the signs of a scam because it offers you incredible amounts of money for zero work at all. All you need to do is sign up, spend some money and access their system which will do all the heavy lifting for you and make you a fortune.

It’s obviously a get rich quick program that won’t work. The real truth is that when you access this program you’ll be pushed into buying other products, systems and services. The goal is to up-sell you into other products so that the real owner of the website can extract as much money from you as possible. Even when you access their members area to access the system the same thing happens, again you’re pushed into other programs.

To top it all off you’ll be subscribed to the owner of the websites email list and will continue to receive email advertisements for a bunch of other programs many of which are scams as well. All in all you’ll potentially spend a lot of money and be more confused as to how to make money online than you are right now!

In my opinion this system is a waste of your time and won’t make you a penny.

Rather than spend another second of your time thinking about it, go ahead and check out my no.1 recommendation below.

It’s personally helped me generate over $150k in the last 6 months alone: