Looking for a review of RegalCoin and wondering whether it’s a scam?

I’ve been taking a closer look at RegalCoin to learn more and bring you my full review.

My review of RegalCoin welcomes those who want to know about the legitimacy of RegalCoin, a company that attracted my attention due to its popularity until the month of September. There has been a lot of these kind of companies launching lately and I already exposed BitConnect and EthConnect in other reviews. 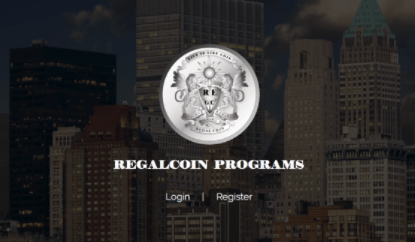 The lack of website of the company deprives me from detailed information about its owners and operations. The company privately registered the domain of its website, regalcoin.co, on 7th July 2017 at international time of Hong Kong.

I also knew that English was not the primary language of the designer of this website through its marketing copy. The Twitter page of the company told me that in August it was initially launched and in September 2017 it was re-launched.

The company also offers referral commission to the affiliates on the Bitcoins transferred by them in three sponsorship levels:

The company uses binary compensation model to pay a residual commission to its affiliates. The affiliate is put at the top of binary compensation model to make a left and right wing of his/her team. At each level, each member in the binary team creates two positions under it. In this way an affiliate can create a team of large numbers of directly and indirectly sponsored affiliates and there is no limit for the depth of the binary team. The company is concerned only about the Bitcoins generated by the team. All the sponsored affiliates in a binary team earn certain percentage of the money invested in the company after attaining a particular level of the investment accumulated. For instance the residual commission will be 2% if the accumulated investment is $1000, 3% for $10,000 and 5% for $100,000.

It is free to join RegalCoin as an affiliate but you will have to buy RegalCoins to participate in its MLM business.

To be honest RegalCoin looks risky to me and I wouldn’t want to put my money into it not knowing whether it would actually come back to me or not. I think programs like this are risky and that’s the reason I have already exposed similar websites in the cryptocurrency niche that are quite obviously ponzi schemes.