Looking for a review of the Stock Market Tsunami?

I received an email from Sean Brodrick inviting me to a presentation titled Stock Market “Tsunami” concerning a phenomenon called the “K-Wave.”

Since I was curious to learn how it will raise the dow to 45,000 before it crashes and leaves the “total economic devastation in its wake” I dove into the presentation and researched about his key points.

In this review, I will present my findings and give my verdict on whether Sean’s idea is worth considering.

Keep reading below to get all the info. 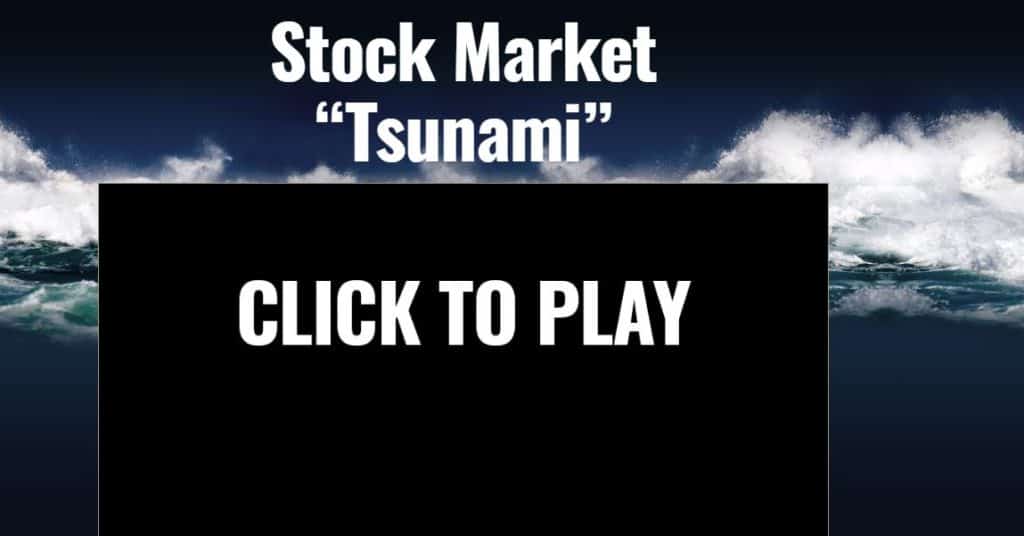 In the Stock Market “Tsunami” presentation, Brodrick talks about a mega wave that is about to cause a huge spike in the market before crashing and eroding all the profits and savings investors will have made.

He calls it the “K-Wave” or “The Long Wave” and mentions that it will lift the DJIA to 45,000 points before it crashes it. It echoes the Dow 40,000 Prediction (by Louis Navellier) which we covered a while back.

He intends to show you how to ride the highs of the K-Wave and avoid the ominous dip (tsunami) that will follow.

It is also worth noting that the message Sean passes in this presentation is eerily similar to what he was touting in his Wealth Supercycle presentation.

Who is Sean Brodrick?

Sean Brodrick is the natural resource investor at the Oxford Club. He is also a senior editor at Wealth Megatrends. Most of what they’ve accomplished is down to the boots to the ground research that Sean does to uncover new investment opportunities.

He started his career in New England where he worked on the cog railroad. It was a menial job that introduced him to the great outdoors and heavy machinery. He graduated from college and worked as a journalist which is when he started covering the stock market.

He specialized in finding undervalued commodity stocks that were likely to ride the supercycles.

He now has a service called Supercycle Investor where he focuses on big market cycles. In his monthly newsletter, Wealth Megatrends, he follows big trends and identifies the most liquid stocks that may pay dividends. I have reviewed his Victory Checks presentation that exposes rare opportunities to receive regular payouts.

In his other service, Gold and Silver Trader, he locates the smaller stocks that can help him leverage the market’s bull-run.

How does the Stock Market “Tsunami” Work?

The Stock Market “Tsunami” is based on a concept first postulated by Nikolai Kondratiev. He put forward the notion that a Kondratiev Wave (K-Wave) has a frequency of 47-64 years and with it, you can predict any major economic events.

His first prediction was that communism would fail, and be replaced by capitalism. He was executed for his prediction but was vindicated when it came to pass.

Sean Brodrick says that the K-Wave model has accurately predicted many economic patterns. Currently, it is indicating that we are about to enter a period of recession that could last up to 23 years.

Another indicator called the “Juglar and Kuznets Cycles” is also predicting that we are on the verge of a recession.

How will the recession happen?

He says that the European Union will trigger the global recession.

Since its formation, the EU has given European countries a leeway to amass unsustainable public debt.

But he expects the EU to collapse and take the world’s economy with it. The first of its fault lines is Brexit, and with more countries yearning for their exits, this could erode the Euro and expose these countries to the reality of their crippling debts.

Next in line will be Japan because it also has a massive deficit and it relies on the EU as a market for its products. With European countries struggling, its economy will also plummet.

Since it is the third-largest economy, its fall will create a ripple effect that will bring down other countries’ economies.

Rich Europeans and Japanese people will want to move their money to a safe place. They will find a home in the American stock market because it offers stability and liquidity. The wave of wealth will make the Stock Market crest at 45,000.

How to prepare for the Stock Market “Tsunami”

To prepare for these events you need to take five steps:

All the precise details of each of these steps are in a report called “THE STOCK MARKET TSUNAMI: Catch the Crest and Escape the Crash.” It has all the details and it can be sent to you for free if you subscribe to Wealth Megatrends.

As a member of Wealth Megatrends, you will receive flash alerts when you are required to act in the market and a weekly e-letter with the best insights of the stock market,

You also receive four reports for free as a Wealth Megatrends subscriber:

Each of those reports takes you through the steps you should take to make money during the K-Wave crash.

The annual subscription is worth $39

There is a one-year money-back guarantee.

This is not the first time that Sean and his team at Wealth Megatrends have made a bold prediction that flies in the face of logic. And to their credit, they have gotten some of those predictions right.

For example, they predicted the stock market crash of 1987 while the country was experiencing an economic boom. Then the Dow plummeted that year and they were vindicated.

They also predicted that the housing crisis would bring the economy and the stock market to its knees and it came to pass.

While those are just two of the predictions they have made and turned out to be right about, it shows that their predictions should be taken seriously. That’s why I think this presentation is legit.

Sean Brodrick believes that human behavior, and by extension, investor behavior, usually follows a series of predictable patterns, a series of waves.

If you study economic waves, you can predict what will happen next in the stock market. Just like Kondratieff, the man who conceptualized the K-Wave predicted that the Soviet Union would collapse, to be replaced by a capitalist system.

In the Stock Market “Tsunami” prediction, he entertains the idea of an economic collapse and the measures you should take to protect yourself during a recession.

If you are curious to know the precise details of his plan, you should join the Wealth Megatrends service.