Banyan Hill has been promoting an event that was hosted by Ted Bauman called “Tech Disrupt” during which he discusses a new tech trend that will create new investment opportunities.

Ted claims that we are about to see a $30 trillion stock market windfall and he wants to show us how to take advantage of it, talking about a tiny stock we should consider going for.

In this piece, we take a closer look at the technology trend he is referring to as well as further details about the tiny stock he is teasing.

Ted Bauman’s Tech Disrupt presentation is about a small company that he claims could see its revenues explode 4,800% in the next few years. 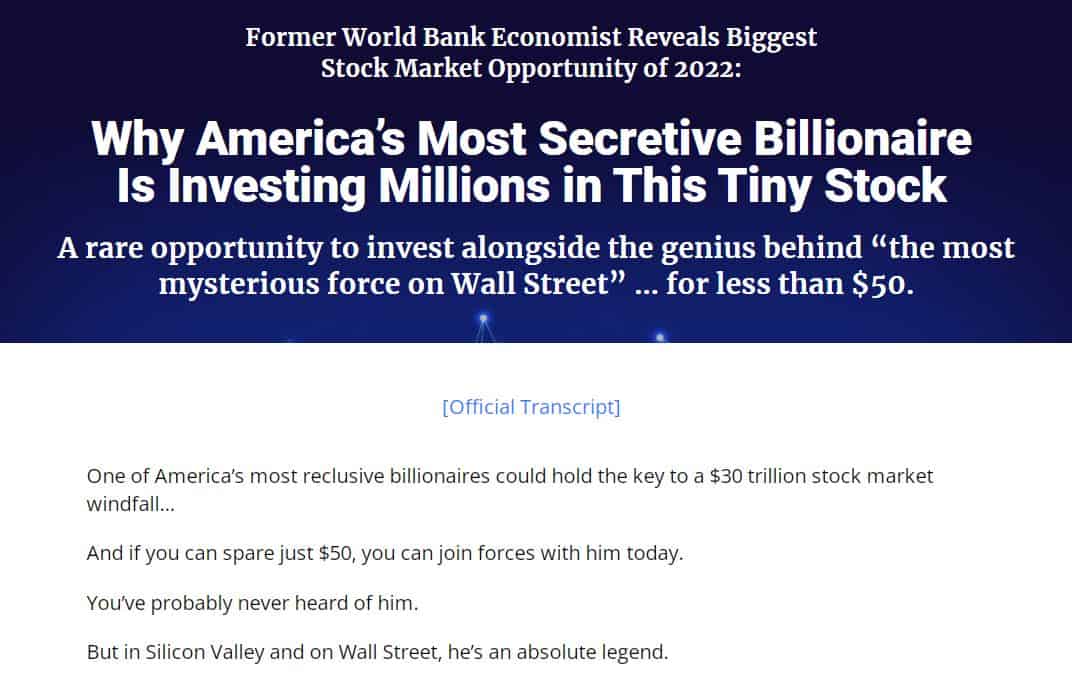 Ted also talks about investing alongside David E. Shaw, whom he refers to as “America’s most secretive billionaire.” He says that David Shaw has always been ahead of most major tech advances of the last three decades.

David Elliot Shaw is a scientist and former hedge fund manager. He established D. E. Shaw & Co., a hedge fund that Fortune magazine called “the most intriguing and mysterious force on Wall Street”.

Ted says that David Shaw has already identified the next major advance in the biotech industry and has even invested millions of dollars in a tiny company that few people know about that could disrupt industries worth trillions of dollars.

He adds that this small company is instrumental in a trend worth more than blockchain technology, surpass 5G over time, and transform people’s lives more than electric cars, driverless taxis, and virtual reality.

So, what’s this tiny company working on that has got Ted Bauman talking in such terms?

He says that it is working on a technology that is used to find new medicines and supermaterials. The technology is Artificial Intelligence.

This company has been working to with other companies to create new life-saving medications that fight or even cure diseases like cancer, Alzheimer’s, and heart disease using AI.

And it won’t just be using AI to develop new drugs because it wants to use it to create new state-of-the-art computer chips will be in new smartphones and other electronic devices. It will also allow manufacturers to make car batteries that run for thousands of miles on a single charge and solar panels so thin they can be painted on a window pane.

Behind all these developments is a small company trading for $50 (as he was releasing the presentation).

Pharmaceutical companies Johnson & Johnson and Pfizer have partnered with the small firm and it is helping them develop new drugs more efficiently.

In addition to them, a thousand companies and labs around the world are using its patented technology. Boeing is also using this tiny company’s tech to find materials to build next-generation planes.

Besides partnering with other companies, this company has eight drugs in development meant to fight diseases like cancer and immune disorders.

Investors like Ron Baron, Cathie Wood, and Bill Gates have invested millions in this company.

Ted Bauman wants you to consider investing in this company and to help you with that, he wants you to read the report he wrote titled The $50 Stock at the Forefront of a $30 Trillion Tech Disruption.

To get the report for free, sign up for his newsletter, The Bauman Letter.

Who is Ted Bauman?

Ted Bauman is a well-known trader, investor, and former economist at the World Bank. He is also a financial expert with a YouTube channel that has over 1.6 million views.

Ted Bauman has been using his contacts and research network to find out about new investment opportunities that he then shares with his followers.

This time, he has focused on a company that is using AI to help pharmaceutical companies develop new drugs, and other companies work on new solutions to other challenges. Ted claims that it could transform electric cars, driverless taxis, and virtual reality, just to mention a few.

Ted normally writes newsletters that are published by Banyan Hill Publishing. He also appears on Fox Business and has been featured in Forbes and Barrons.

How the Bauman Letter Work?

As we’ve mentioned, Ted Bauman has written a special report with all the details concerning a tiny company behind this new tech revolution. The special report is called The $50 Stock at the Forefront of a $30 Trillion Tech Disruption and you only get it when you sign up for The Bauman Letter.

With the Bauman Letter, Ted normally focuses on new investment opportunities behind big trends that may disrupt entire industries.

In this case, he is backing a company that has been working on a new technology that could be used by 30 of the world’s biggest pharmaceutical companies. On top of that, it is working on a new drug that could get approved and rolled out. As a result, the stock price of this company may soar.

When you sign up for The Bauman Letter, you get:

In addition to the special report about the tiny company, Ted has also written another report and a book that you will get for free when you subscribe to The Bauman Letter:

This is a special report that focuses on a small company that is involved in a trillion-dollar boom.

It is working on a state-of-the-art algorithm that may disrupt the energy sector and be used by companies like Amazon, Apple, Facebook, Google, UPS, and Walmart.

It wants to improve energy performance by incorporating battery technology and energy storage to “smooth” demand for energy. Therefore, it will make energy cheaper, smarter, and more efficient.

Blackstone, Soros Fund Management, and Fidelity have all invested millions of dollars in the company.

It is a book by Ted containing ideas and strategies that can complement your portfolio. Ted also writes about ways of creating an endless stream of income.

The subscription will then renew at $79 per year after that.

The subscription is backed by a one year money back guarantee.

Ted Bauman is one of the most vocal investment gurus in matters concerning the tech industry. He has been talking about such opportunities for years. Therefore, whatever you make of him, he is credible.

However, he could wind up being totally wrong about the small company he is teasing because the stock market has no guarantees and no one can accurately predict the future. Therefore, you should invest what you can afford to lose.

Ted Bauman’s Tech Disrupt is about a small company that is working on a new technology that will revolutionize multiple industries. Ted and his team arrived at it after countless hours of research and analyzing this opportunity.

The presentation also promotes his newsletter, The Bauman Letter, which he has been using for a few years to talk about investment ideas on the back of new trends. In this case, he has targeted a company working on a new trend and he wants you to consider investing in it.

Needless to say, Ted is merely offering general advice when he talks about this company and you should, therefore, take a closer look into it before you consider investing in it.