The Palm Beach Research Group and its corporate affiliates have been promoting Teeka Tiwari’s new webinar about “The Anomaly Window” or “Crisis & Opportunity.“

The purpose of this webinar is for Teeka Tiwari to talk about a significant event that will happen to the stock market that will result in opportunities we cannot afford to miss.

Here, we will take a look at what Teeka is talking about and find out more about the big market event he is referring to.

Teeka Tiwari’s The Anomaly Window talks about a major market event that’s scheduled to happen soon. He calls it the anomaly for this reason.

Tiwari says that we could be days away from the wild market event, yet few people outside Wall Street know about this. He even quotes Nasdaq saying that this is considered one of “Wall Street’s best kept secrets.” 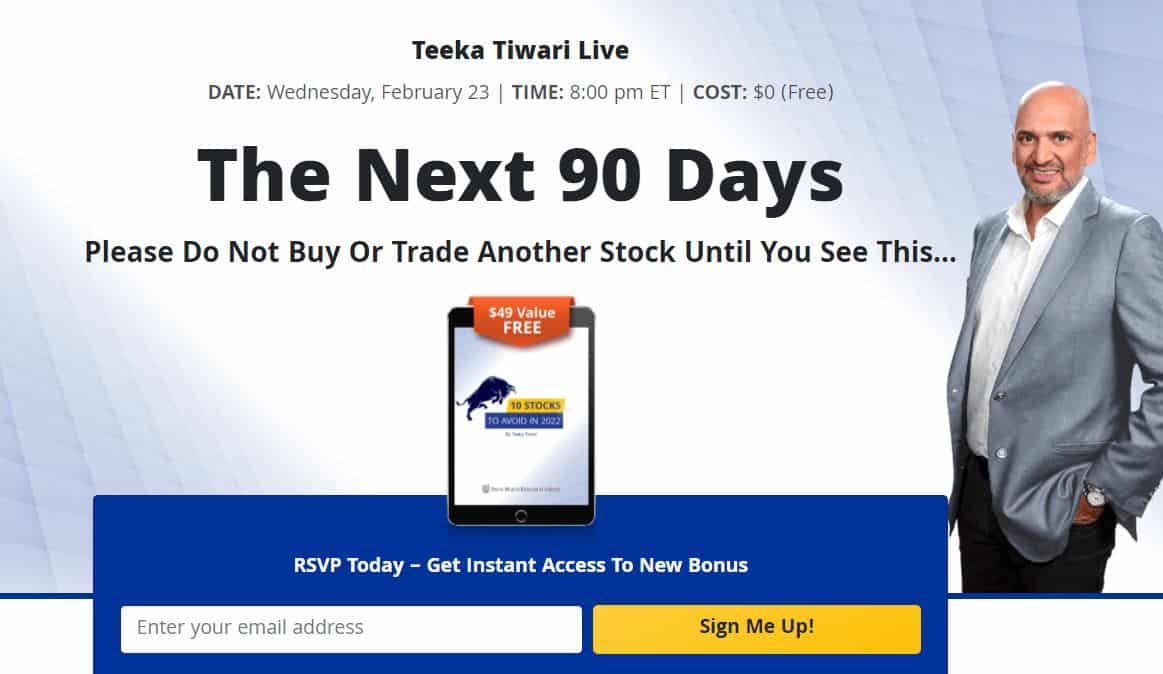 Teeka says that this is not the first time this event is happening because it was around 28 years ago.

But the impact cannot be overstated because “the impossible becomes possible.” For example, even blue-chip stocks that are generally considered safe and stable can swing wildly and earn investors a lot of money.

Teeka Tiwari says that he has experienced this before and has even shown his followers how to take advantage of this situation.

He alleges to have helped them make 21 years’ worth of stock market gains in 12 weeks. In saying that, he is implying that he can pull it off again given the chance and that investors should hear him out.

He says that as the anomaly happens, he will be investing in certain stocks that will do well in such a climate.

He says that he will be live streaming the Crisis & Opportunity webinar and hosting a Live Q&A session during which he will reveal the names and ticker symbols of those stocks.

I should point out that his statements sound a bit like Jeff Brown’s remarks when he was promoting his 100x Plan and Exclusive Private Briefing. This does not mean that they are talking about the same thing, although you will find it interesting that their firms (Brownstone Research and Palm Beach Research Group) are both under Legacy Research Group and they promoted their respective webinars on each other’s website.

Who Is Behind The Anomaly Window Webinar?

He is currently the chief editor at the Palm Beach Research Group.

He is a leading cryptocurrency expert who is known for editing a couple of crypto-focused investment newsletters for Palm Beach Research Group, such as Palm Beach Confidential. Teeka Tiwari boasts an impressive track record as a financial advisor.

Since he started writing newsletters, Teeka has been focusing on finding the next big investment opportunity of the day. Specifically, Teeka is always looking forward to sharing what he considers the best recommendations for making extraordinary gains in multiple industries.

How Does The Anomaly Window Work?

According to Teeka Tiwari, the market may soon be witnessing the BIGGEST anomaly in 28 years. He is also predicting that the window will be open and investors better take advantage of the opportunity before it closes.

Since he hasn’t hosted the event, I did my research with the little bits of information he has been sharing as he promotes it on his blog (and in the invitation).

The first thing I looked at was the significant event he hints at that happened 28 years ago.

A quick Google search of the most impactful events to happen in the capital markets in 1994 (28 years ago) brought up the 1994 bond market crisis (or the Great Bond Massacre).

What happened during the Great Bond Massacre?

Bond market prices tanked in the industrialized world and the markets shed $1.5 trillion.

In hindsight, many financial analysts have argued that the collapse was caused by the Federal Reserve’s decision to increase interest rates (or imply that it would follow that course of action). Investors panicked and there was a sell off.

The Fed was slated to increase rates to mitigate inflation, which was relatively high at that point. The rates had been relatively low in the preceding years because the markets had just recovered from the 1987 recession.

It is fair to say that this sound eerily familiar now: Interest rates have been high, inflation is high, and there are speculations that the Fed may raise rates.

In his articles promoting the event, Teeka has indicated that the remedy to this is to buy the dip. Stock markets have dipped and investors have been fearful.

Teeka thinks that the stock market will rally and those who cower in fear will miss out on a new round of gains.

Yes, Teeka Tiwari’s The Anomaly Window is legit. I think it is legit because Teeka is just making an observation and implying that he has his projections of how he thinks this will pan out.

There is nothing illegitimate about that. Besides, Teeka Tiwari is a legit investment analyst with decades of experience having worked on Wall Street, ran a hedge fund, and forged a career in cryptocurrency analysis. He may make a few outlandish claims as he promotes his webinar but I feel that he is by and large justified and well within his rights to make his remarks about the stock market.

Although Teeka Tiwari is entitled to making his feelings known about the market, I think you should take his advice with a grain of salt. By this, I mean that you should be skeptical and question his approach; assess his investment philosophy objectively.

Teeka is basing his predictions on what has happened before in the markets. He thinks that we are about to see a repeat of an event that happened 28 years ago that will have almost the same impact this time around.

That may turn out to be true, but it may also be incorrect. In the capital markets, history does repeat itself sometimes, but there are often surprises.

I suppose the best thing to do here is do further research and make your decision based on a wealth of information that goes beyond Teeka Tiwari’s webinar. Although I must say, Tiwari is making solid points worth examining further.