Welcome to my review of Louis Navellier’s Accelerated Income Project.

I recently received an email inviting me to the event so I decided to look into it to determine whether it is legit.

I wrote this review to share my sentiments on the event and give you an overview of what to expect from Louis Navellier.

If you are undecided about the Accelerated Income Project, hopefully, you will find it helpful.

The “Accelerated Income Project” by Louis Navellier is a summit that he will be hosting on May 20th from his home in Florida.

He intends to use the summit to talk about his latest income project. 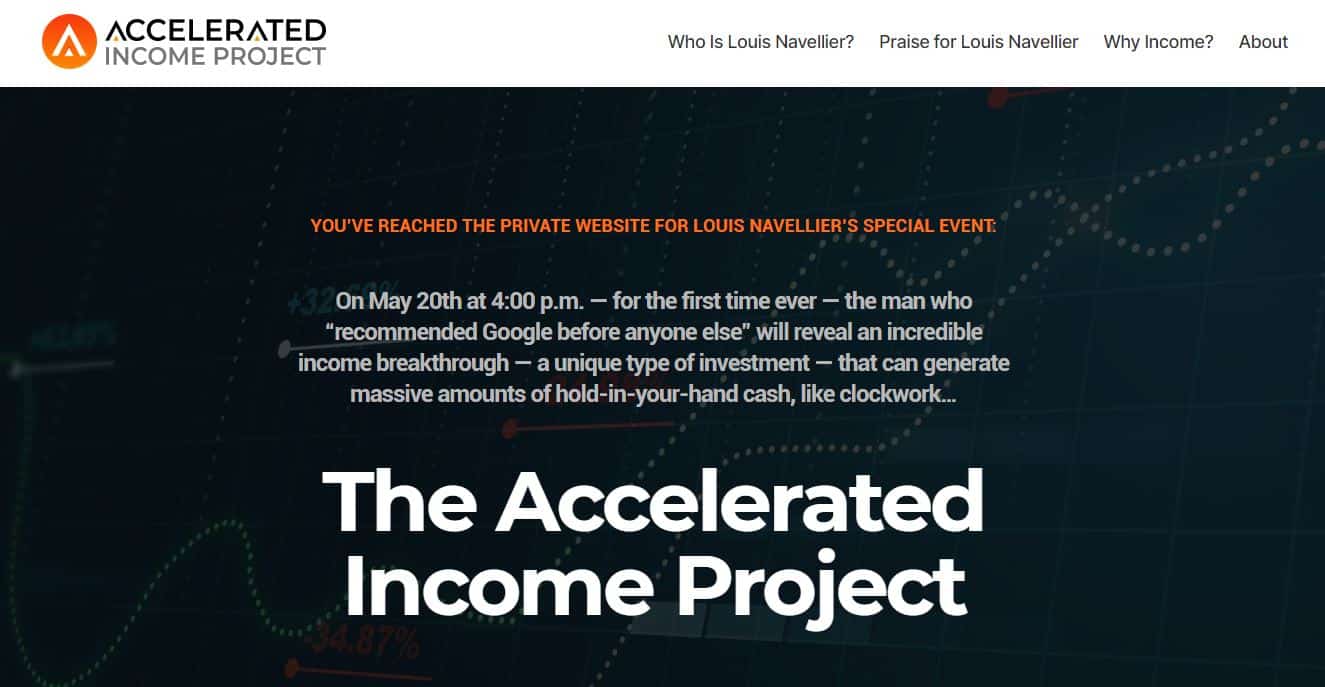 He claims to have found a way for investors to make money from the stock market consistently without investing a large sum upfront or taking on excess risk.

It has nothing to do with bonds, options, dividends, or any “conventional” form investment we are accustomed to. That leaves us guessing what he is up to, which he intentionally did to get us interested enough to attend the webinar.

He says that by taking on this investment, you may receive twenty $2,500 payouts in the next 12 months totaling to an annual income of $50,000.

What to expect from the Accelerated Income Project

Louis doesn’t reveal much of what he will be discussing during the webinar. However, he gives us a few clues that we can use to deduce what he may be up to.

First, saying that he will reveal a unique investment that will send thousands of dollars in income for the next 30 years doesn’t reveal much at face value. However, we can infer that he will be talking about a long-term investment opportunity.

Since it will be an “income” investment, he may be referring to an investment like a dividend stock which pays you regularly for holding it.

But, we can rule that out because he says that his unique type of income investment will yield more returns than the highest-paying dividend stocks.

We can also rule out options, bonds, dividends, penny stocks, or other “traditional” income investments.

In one of the promotional videos, he says that the opportunity he is referring to is largely unknown. He claims to have discovered it in a “corner of the market” where most investors hardly venture to.

Who is behind the Accelerated Income Project?

Louis Navellier is an investment analyst whom one edition of the Forbes magazine dubbed the “King of Quants.” They called him that to reference his tendency to use computer-aided systems to analyze the stock market.

Louis’ interest in the technical analysis was piqued when he was in college when he wrote an algorithm that beat his benchmark, the S&P 500, by a factor of 3 to 1. When he left college, he started offering investment advice to other investors through his investment advisory services.

Most of what he has done since then is to use his algorithms to unearth the household-name companies of the future to enable his readers to get in on them on the ground floor.

By following this approach, he discovered and recommended Microsoft, Intel, Nike, Home Depot, and other major companies to his readers while they were still trading at very low prices.

He publishes a host of investment advisory services on InvestorPlace, including Growth Investor, Breakthrough Stocks, and Accelerated Profits.

If you would like to access all the advisories he publishes on the platform in a subsidized package, you have to join Louis Navellier’s Platinum Growth Club.

How does Accelerated Income Project Work?

The event will happen on Wednesday, May 20th at 4 PM ET.

If you’d like to attend, you need to book a place by providing your email address.

In doing so, you will receive event updates leading up to the summit. You will also be automatically subscribed to Louis Navellier’s Market360 newsletter.

Accelerated Income Project is legit because it will be hosted by Louis Navellier.

Louis Navellier’s track record speaks for itself and demonstrates that he has the qualifications to offer investment advice. For example, earlier in his career while he was running his investment fund, he went through a 15-year period where he made a 4,000% return on his investments. He earned the respect of his peers for finding winning stocks consistently.

On top of that, I recently reviewed Louis Navellier and found him to be legit. Thus, it makes sense to come to a similar conclusion as I review the event that he is hosting.

The Accelerated Income Project is aimed at people who are nearing or are at the retirement age. If you are at that point in your life, his message will resonate with you because the promise that he will show you how to collect large, consistent payouts from the stock market without taking on a huge risk sounds perfect.

While that sounds appealing, you should not go into it expecting to make money quickly and with minimal risk. No matter what Louis says to assure you that you can safely invest and go home with a significant payout, you should not plow all your savings into his recommendations.

Should you follow his advice, only use a small portion of your overall retirement nest egg to test his strategy. Ultimately, all investments bear risk and Louis’ recommendations are no different.