America Ground Zero is the title of a presentation by Nick Giambruno who’s discussion centers on a “A dark financial storm [that] is brewing in America right now” that he thinks will decimate people savings.

Never one to shy away from making such gloomy predictions, Nick says that he has found a $3 trade that could save you from financial ruin and turn into an 891% gain.

Let’s take a closer look at what Nick Giambruno is talking about, whether there is a genuine need to be concerned about a financial crisis, and the investment he is teasing.

America: Ground Zero is a presentation by Nick Giambruno that concerns a looming financial crisis that he thinks you need to act fast and prepare for to save yourself financially.

Nick Giambruno has released such a presentation before when he did The 4th Shock and Endgame 2020 (The Switch) because the premise in both was that the economy is due to collapse and we need to take action as fast as we can to save ourselves from inevitable misery. In both of them, he was blaming “the elite” for trying to hijack the economy and control people’s lives. 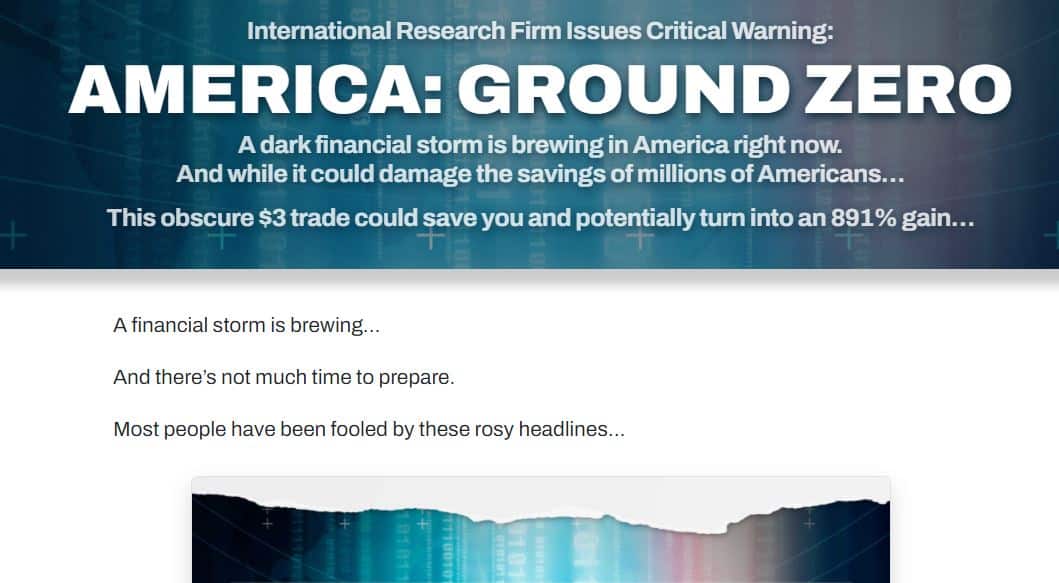 In this one, the tone is a bit different because he doesn’t blame any specific groups. Instead, he says that we are about to see chaos spread to every corner of the economy whereby stocks, currencies, and commodities will thrash up and down and thousands of businesses will go bankrupt.

According to Nick, millions of Americans will see their savings damaged and there will be a massive wealth shift because the money will move from investors who don’t know what do to investors who know what to do. The suggestion here is that he wants to guide you so that you join the group that knows what to do.

He says that the recovery that we are seeing in the aftermath of the Coronavirus Stock Market Crash is temporary because it is just a precursor for the dark times that lay ahead.

Nick Giambruno draws comparisons between the stock market now and the situation during the Dot Com Bubble, the Global Financial Crisis of 2009, and The Great Depression. He believes that we are about to see some patterns repeat themselves.

For example, the chart during the Great Depression looked like this: 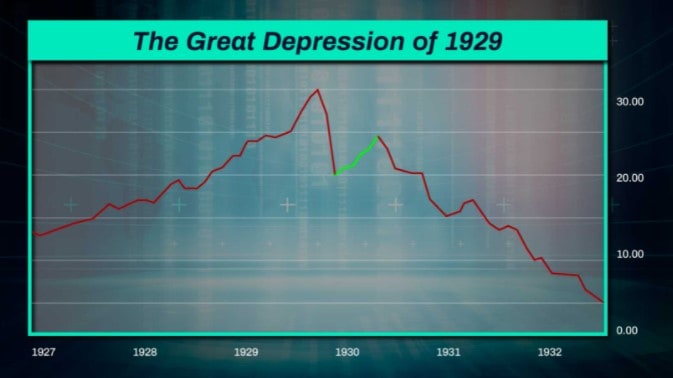 Comparing the market then to the market now, he believes that we are currently on that green stretch where the market looked like it was recovering from a correction before it plummeted again triggering one of the worst stock market crashes in history.

Other analysts have shared his pessimistic view and I have seen this in presentations like The Great Devastation Of 2021 by Andy Snyder and The Next Phase Of The Collapse Of 2021 by Martin Weiss.

So, why does Nick Giambruno think that we are about to experience a recession?

He says that we are witnessing five catalysts that he also refers to as “stages”:

The average Price to Earnings ratio is higher than it should be for stability, which is 15. He says that the average P/E ratio is at 37 and that means that we are about to see a recession because it was at 30 in the Great Depression and the Dot Com Bust.

People are borrowing to invest in stocks at a higher rate than usual. Nick points out that the margin debt is too high and that is problematic because when the market goes down by 30%, many investors will get a margin call. Nick says that the margin rate is supposed to be below 150% for stability yet now it stands at 400%.

Nick Giambruno says that corporate debt is also too high. In 2007 and 2000, it was at around 44% and this time it is at 54% making it highly likely that debt defaults will occur.

The other sign that market is in trouble according to Nick Giambruno is the high number of stock buy-backs. According to him, there could be serious consequences because they normally precede a stock market crash.

Nick Giambruno believes that the Tax Cuts and Jobs Act of 2017 that Trump signed into law in 2017 encouraged stock buybacks and allowed tech companies to evade taxes.

As the Biden administration tries to reign in on these tax avoiders, he will tax them more and that will hit the big tech stocks that are leading the market rally.

Crisis Trades: How to survive the Recession

Nick Giambruno wants you to prepare for the recession by investing in what he calls “crisis trades.” He believes that with the right moves, you can position yourself to make a lot more money than you ever could during a bull market without trading options or even shorting stocks.

“Crisis trades” are things like gold and Bitcoin although he prefers the former because it has been around for longer and could serve as the go-to hedge against the US dollar.

Out of all the ways you can invest in gold, he prefers to trade gold stocks and he has chosen one small company that trades at $3  that is trading under a new name and remains unknown to about 99.99% of investors. As the financial hurricane sweeps the country, he expects it to do well.

Nick Giambruno describes this small company as having more impressive gold ore than any other project he knows and that it unearthed two of the biggest gold rocks ever discovered. It also owns gold resources worth $4.6 billion.

Nick Giambruno wrote a report about this Karora Resources titled Crisis Trades: Your Chance To Collect $99,100 As the Financial Hurricane Sweeps America.

He shares more details regarding the company and why he chose it as his number one Crisis Trade. You don’t have to read it to find out what company he was teasing because I’ve already revealed it.

Who is Nick Giambruno?

Nick Giambruno specializes in value investing in crisis markets and says that he emulates Baron Rothschild who was a big fan of investing “when there’s blood in the streets.” He also writes about geopolitics, international banking, the global cannabis market, surviving a financial collapse, second passports, and much more.

What is the Crisis Investing newsletter?

The Crisis Investing newsletter is a premium research service published by Casey Research that Nick edits. He did the presentation to promote this newsletter to new readers.

Nick publishes his research as soon as he finds new opportunities. He mostly recommends trades that are involved in “financial storms.” When you join Crisis Investing, you also receive exclusive 24/7 Access To A Private Members-Only Website

In addition to that, you will get other special reports:

Crisis Investing: The Time To Buy Is When There’s Blood In The Streets

Within this report, you will disclose the name and ticker symbol of a new “blood in the streets” trade recommendation. This trade pick will also provide you a chance to profit from a crisis.

The Financial Hurricane of 2021: How You Could Make 1,221% Gains During This Unprecedented Crisis

In this special report, Nick reveals an asset that some investors are banned from investing in that has the potential to generate massive gains.

Silver Spike: The Tiny 70¢ Stock That Could 12x Your Money From The Financial Hurricane.

This special report reveals a tiny 70¢ stock that owns a silver resource worth as much as $1.1 billion. Eric Sprott has also invested in this company

There are NO CASH REFUNDS but Nick gives you 90 days to cancel your membership and you will be allowed to divert that subscription fee to any other service offered by Casey Research or any other publisher under Legacy Research Group.

This presentation was done by a credible investment analyst, Nick Giambruno, who with the help of Doug Casey, has been seeking investments that do well in a crisis. Doug Casey has a track record of making predictions that have done well although he, too, has made a few bad calls over the years.

Casey Research is also a legitimate publishing company. If you subscribe for a newsletter, you will get what you are paying for.

However, you should take Nick’s recommendations with a grain of salt because he may make predictions that fail to materialize.

One of the trades he teases is a gold company that trades at $3 that he says could do well even in a recession. After doing my research, I found out that he is talking about Karora Resources Inc., which is based in Canada.

After going through the presentation, I’d urge you not to follow Nick Giambruno’s advice before vetting it yourself. After all, he is not offering personal financial advice, rather it is general advice. However, he does make some valid points that you should take into consideration as you do your personal research.