Looking for a review of the Endgame 2020 (The Switch) presentation by Nick Giambruno?

I recently got an invitation from Casey Research bringing my attention to the video, so I decided to take a closer look and see what Nick was going on about.

In it, he claims that we are about to see a major financial event that will erode people’s savings and retirement accounts. However, he has a solution to the issue that will improve your financial situation.

In this review, I provide you with an overview of what Nick discusses as well as share my verdict on whether I think it is legit. Keep reading to learn more.

Introduction to Endgame 2020 (The Switch)

Endgame 2020 is a presentation by Nick Giambruno where he postulates that “America’s Elite” is conspiring to do away with cash as a form of currency. 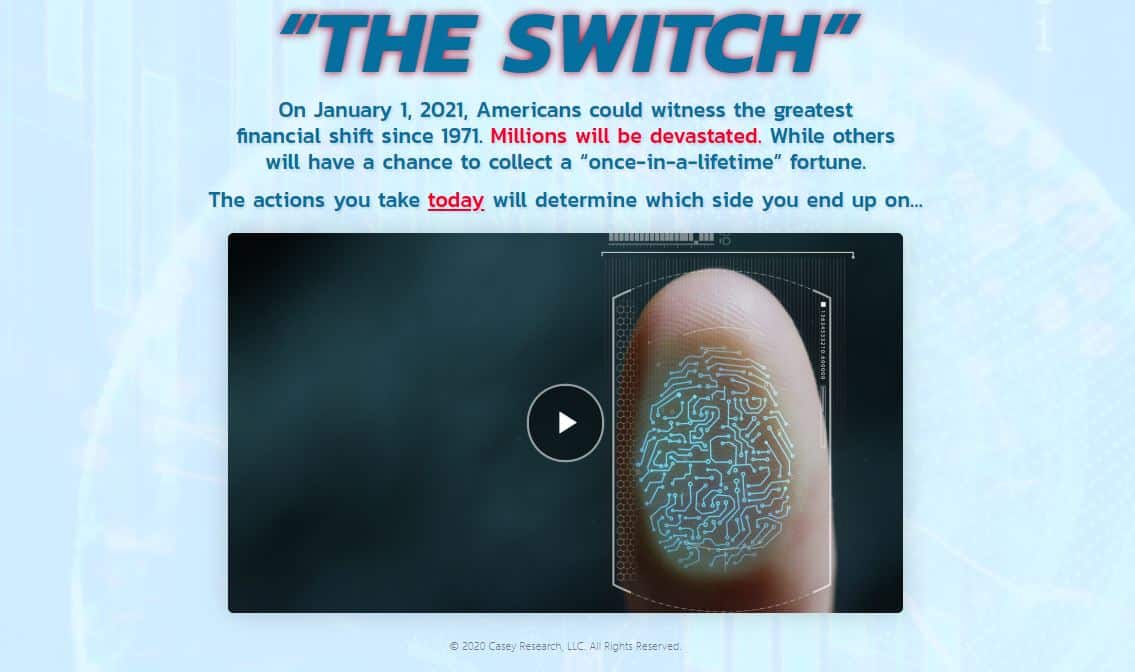 He says that in its place, they want to issue a trackable and controllable digital currency that will undermine your freedom. When he talks of “America’s Elite,” he mentions influential politicians like Nancy Pelosi, wealthy individuals like Bill Gates, and institutions like the UN, IMF and the Fed.

Before we go any further, this sounds a bit like The Final Currency Crisis by James Dines or “The Cash Apocalypse” from Harry Dent Legit in the sense that it instills fear of impending crisis.

The changes will decimate many people’s savings as well as retirements. So the question is: How will that happen?

He believes that the pattern set by previous major changes to the financial system serves as evidence of what is bound to happen when the new changes are put in place. The historical events he is referring to are:

But if you act beforehand, following his instructions, you can avoid financial ruin and even make 500% to 1,000% in profits.

The financial shift he is talking about is the transition from paper currency to a new “digital currency.” The new form of money will enable the government to collect more information about citizens to make them easier to control – unless you break free by following Nick’s recommendations.

He believes that the transition will happen on January 1st, 2021, per a bill drafted in the Senate. Even the House of Representatives is on board courtesy of a bill that was sponsored by House Speaker Nancy Pelosi.

He believes that Bill Gates has a hand in all of it because he has allied with big companies and institutions. It is called The “Better than cash” Alliance.

On top of that, Microsoft has patented a government-backed cryptocurrency and a Gates-backed company called GAVI has launched a personal information collection initiative called ID2020.

Nick Giambruno works for Casey Research. He is the chief analyst of the flagship investment advisory service, The Casey Report (We previously encountered it in my review of a presentation titled “The Ayatollah’s Revenge“). He also works on a second premium service called Crisis Investing.

With the latter, he focuses on value investing.

He lives by the principle of buying when the market is in the gutter. He acquired that philosophy from Baron Rothschild, who is quoted saying that the best time to buy is “when there’s blood in the streets.”

In his writings, he focuses on value investing in crisis markets, geopolitics, the global cannabis market, second passports, international banking, surviving a financial crisis, and other subjects.

He travels the world covering investment-related topics. For example, he was recently in the Middle East where he was studying regional banks and other companies. He is also a well-known speaker.

Nick insists that if you’d like to steer clear of the damaging effects to the new financial system, you need to get your hands on a report titled The New Crisis Currency: Why Every American Should Own at Least $100 of the Hardest Money the World Has Ever Known.

Inside that report, he walks you through how you can buy a few hundred dollars of a “crisis currency” before the new digital currency comes into place.

To get the report, you have to subscribe to The Casey Report.

In addition to the report about a crisis currency, he also sends you two others titled:

One year of the Casey Report costs $49 if you join via the presentation. It is usually $199.

You have 60 days to test the newsletter. If you decide to cancel within the first two months, you are entitled to a full refund.

I think Endgame 2020 (The Switch) is legit because it involves Casey Research.

I have reviewed Casey Research and the presentations they put out before here and I always give them a clean bill of health. Nick’s recommendations also sound like legitimate investments. However, I can’t help but admit that sometimes during the presentation, Nick Giambruno sounded extreme with some of his claims.

Although the result is to get you to sign up for the Casey Report, some of his statements are conspiracy theory fodder. That will inevitably put many people off.

Nick claims that there will be a massive change to the financial system. Cash will be replaced by traceable digital currency and people will lose their retirement plans. However, if you follow his instructions and act fast (buy his crisis currency), not only will you be spared but you may also make money.

He also mentions that the “big-government bureaucrats and central planners” want to confiscate every detail about you and your personal life. In an attempt to wrestle back control of your personal information, he sends you a report that outlines steps you need to take to protect yourself.

He also sends you a third report showing you three gold investments you need to get in on to make money as the Fed embarks on a money-minting spree.

You receive all those if you sign up for Casey Research, which was the purpose of the presentation anyway.