Welcome to my review of Paul Mampilly’s presentation titled “Biggest Profit Opportunity Of The Decade.”

In this presentation, Paul Mampilly talks about what he considers to be the biggest profit-making opportunity in the space sector because he believes that the often-misunderstood industry is going to be one of the biggest trends of the coming decades.

If you would like to learn more about this investment opportunity keep reading this article where I give you an overview of what Paul talks about in his pitch.

Introduction to Biggest Profit Opportunity Of The Decade

The Biggest Profit Opportunity Of The Decade is all about the space industry and the investment opportunities in it.

It appears to be an updated version of a pitch he did last year called The Race to Mars where he was talking about the various stakeholders working on taking human beings to Mars. 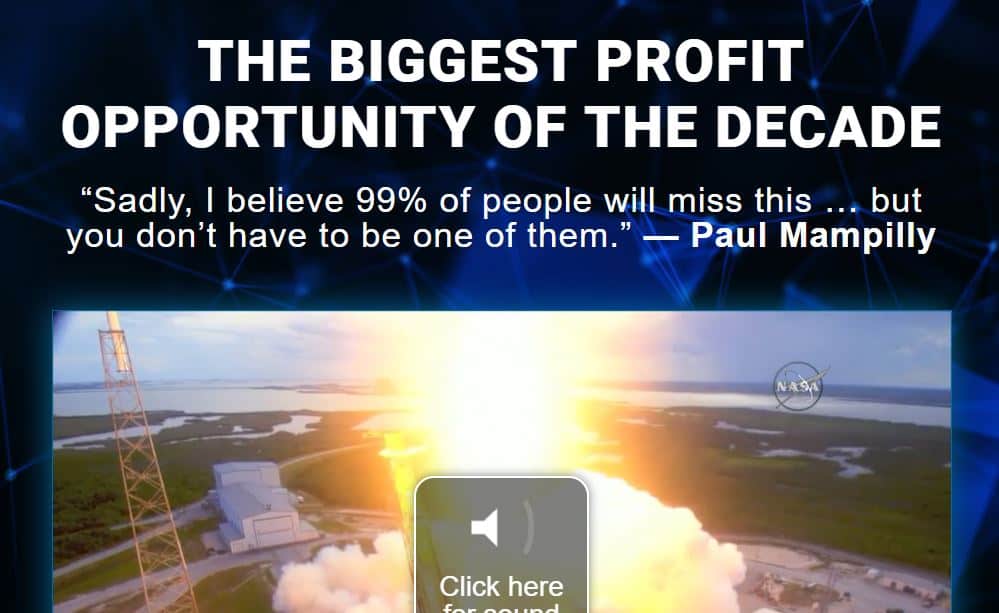 Paul Mampilly says that Space is an industry that few investors understand despite it having over 4,000 companies and organizations linked to it. And don’t forget billionaires like Jeff Bezos, Elon Musk, and Sir Richard Branson.

He believes that there is a handful of companies that have the potential to earn investors a lot of money if they get in early enough. To drive this point homes, he says that in the first two and a half months of 2021, certain space stocks went up 30%, 75%, and even 130%.

Paul Mampilly is a big fan of companies that are in the Space industry because he believes that cost reductions, such as the ones we are seeing with launches and entire missions, are likely to drive the industry higher. He says that a cost reductions are always a precursor for growth.

He also lauds the heavy investment going the direction of space companies from venture capital firms, billionaires, and even government agencies like NASA.

Out of the many companies in the Space industry, he has identified three that he thinks will make for great investments.

Three Space Stocks To Invest In

Paul Mampilly claims that the three companies will prove crucial to America’s space exploration ambitions and they may easily double in the next year and potentially soar as much as 900%, 1,000%, and 3,900% in the next few years.

He describes the first of the three companies as follows:

It’s a commercial space innovator that is building the vehicles and infrastructure we’ll need to make regular space travel a reality.

A California company specializing in space transportation vehicles, satellite-as-a-service, and in-orbit services is positioned to become a global leader in creating new space-based transport systems that will become the preferred alternative to the railroad lines, public transit systems, and highway networks.

Customers include Lockheed Martin and government agencies such as NASA. And as of September 30, 2020, signed contracts represent a whopping $90 million in potential revenue over the next several years!

He says that this is just the beginning and this company is already at the forefront of the new space economy, a soon-to-be trillion-dollar market.

“My next favorite space stock is another strong American company, employing more than 2,000 people.

It’s got annual sales of around $600 million, and it’s valued at less than $1 billion.

But all that is about to change…

I don’t know anyone who’s done more research in this than me. And all that digging and analyzing tells me one important thing: This company’s technology will become one of the most promising and profitable industries to benefit from the new space race.”

He says that it is at the heart of the biggest revolution in manufacturing in decades, a revolution that could remake America and be an important part of the country’s goal to reconquer space, revisit the moon, and send manned missions to Mars.

And as for the third company, here is what he has to say:

“It makes “digital steel” products that solve its customers’ most difficult design challenges. And it’s been doing so since the late 1950s.

Now I won’t get into the technical details here.

It serves more than 120,000 customers in the aerospace, defense & security, communications and industrial markets…

Its market cap right now is a little under $40 billion…”

He says that it has 3,765 patents in the US and thousands more in three dozen countries across the globe. He expects it to be a supplier to companies like SpaceX, Blue Origin, and others within the space sector.

He has written about the three companies in a report called A Fortune Made in Space: The 3 Hottest Space Stocks to Buy Right Now. 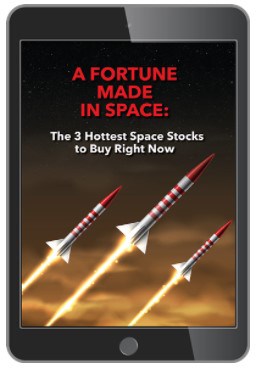 To get this special report for free, you have to sign up for Paul Mampilly’s Profits Unlimited newsletter.

Who is Paul Mampilly?

He is a prominent newsletter editor with over 130,000 subscribers reading his newsletters. He publishes his work via Banyan Hill Publishing.

Paul Mampilly has almost 30 years of experience in the investment world. He has worked for many renowned firms over the course of his career, including ING, Deutsche Bank, and Bankers Trust. He has also worked as a hedge fund manager, whereby he has grown a management firm’s overall assets from $1.3 billion to $5.8 billion to a further $25 billion.

At the age of 42, he opted to retire before coming back and shifting his focus towards Main Street Americans with his newsletters. He helps Main Street Americans make money on their investments by exploiting profit-making investment opportunities in the stock market. Using his recommendations, many people have successfully cleared off their debts stabilized their finances.

This time, he is highly confident about the space sector. According to him, the space industry is Wall Street’s next trillion industry. Paul Mampilly has found out profit-making investment opportunities in this sector and shared them in the presentation.

What you get when you sign up for Profits Unlimited 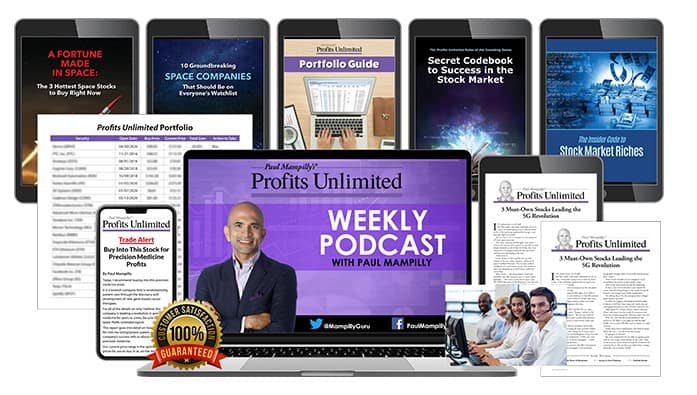 First, you get free copies of all the special reports where he has talked about all those space companies that he is recommending.

For example, the first special report, A Fortune Made in Space: The 3 Hottest Space Stocks to Buy Right Now talks about Paul’s detailed analysis and buying guide for his three favorite space stocks. According to Paul, these companies will be your best investment opportunities for bigger profits.

There is another special report about Space stocks called 10 Space Companies That Should Be on Everyone’s Watchlist. This is a comprehensive space stock investment guide where you’ll reveal Paul’s top 10 space companies including a space tech superstar whose technology has already been to Mars six times.

In addition to that, you’ll receive three more additional reports…

You’ll get access to these reports only when you opt for the subscription to Profits Unlimited investment newsletter service. Other benefits include…

Is Biggest Profit Opportunity Of The Decade Legit?

Yes, Biggest Profit Opportunity Of The Decade is a legit presentation.

First Paul Mampilly is a legit investment analyst with decades of experience as a professional investor. He is also a former hedge fund manager who was highlighted by Barron’s as running one of the best hedge funds back when he was still working on Wall Street.

The Space industry is expected to blow up as more companies get involved and more investors become aware of the opportunities that it presents.

In this presentation, you learn more about what Paul considers to be the best stock investment opportunities in the space sector. Paul Mampilly is confident about this sector and that’s why he did the presentation in the first place!

If you are interested in investing in the space industry, then Biggest Profit Opportunity Of The Decade is a presentation worth checking out. Paul Mampilly talks about the massive opportunities you can capitalize on in the industry.

Paul points out that SpaceX’s Mars Mission as well as NASA’s Moon base project are likely to spark a mad rush in the space exploration sector. This is why he thinks it could  be one of the biggest investments in human history if you find the right companies to back.

Paul Mampilly is ready to share his recommendations only if you opt for a subscription to the Profits Unlimited newsletter service. It comes with a 365-day money-back guarantee. Therefore, if you are unsatisfied with the subscription, you can ask for a full refund of your subscription.