Casey Research has been promoting a presentation by one of their analysts called Nick Giambruno. The title of the presentation is “Covert-23.”

It concerns an impending financial depression he is predicting whose impact may rival the Great Depression because he expects it to affect nearly all kinds of investments.

In this article, we explore how Nick expects this to unfold and hopefully, you can then decide what to make of his claims and offer.

Casey Research’s Covert-23 is a presentation by Nick Giambruno that centers on a “financial pandemic” that is “set to infect portfolios the globe over.” Nick says that he came up with his hypothesis after reading various studies into how the financial system is modeled. He says that after studying global markets, various experts from different fields learned that there is a group of entities that control the economy. 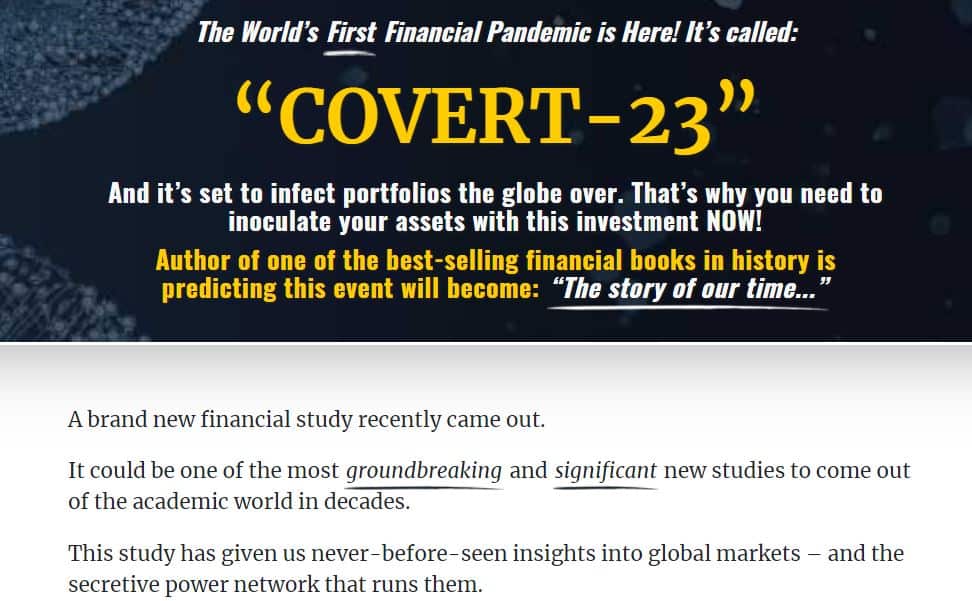 Starting with a database of 37 million companies, the researchers mapped the web of ownership between them and narrowed them down to 147 “super-corporations” that control the economy. At the heart of them are 23 firms (predominantly banks) that control almost half of all the money flow on the planet.

He referred to these 23 entities as the “Covert-23.” These super corporations control as much as $183 TRILLION worth of assets.

He says that a majority of their actions are negative. For example, he says that they may be behind the polarization of politics, the income inequality problem, and even the occurrence of the Global Financial Crisis. He says that they usually take advantage of market bubbles by sucking up money from retail investors and when these bubbles burst, they then come in to lend money, charging interest.

Giambruno believes that this concentration of power and assets is not sustainable and may implode, leading to a depression. He wrote a report about this called Your “COVERT-23” Inoculation Program: How to Survive the Coming Collapse of Western Civilization. Inside, he lists the names of the 23 entities, how they came about, and how you can invest to avoid financial ruin in the event of a depression.

To get a copy of the report, you have to sign up for a newsletter called The Casey Report. We will look into that in a bit.

Who is behind Casey Research’s Covert-23?

Although the presentation was done by Nick, he admits that he consulted with Doug Casey.

He is a big proponent of crisis investing, pointing out that he resonates with a quote by a Rothschild that stated that the best time to invest is “when there is blood on the streets.” Most of his work is based on this philosophy.

Doug Casey, the founder of Casey Research, a boutique financial research firm that publishes newsletters meant for retail investors. Doug Casey is a renowned investment veteran who has years of experience in the financial services industry. He is best know for his bold predictions about the market and, along the way, he has authored some best-selling books. Some of his most notable titles include classics like Strategic Investing and Right on the Money.

What you get when you join the Casey Report

As I mentioned earlier, Nick wrote a special report about the 23 entities and you get a free copy of it when you become a subscriber to The Casey Report.

Subscription Price: An annual subscription to The Casey Report typically costs $199 but you can get it for $49 if you sign up via the presentation.

Casey Research’s Covert-23 is a legit presentation because it is done by an actual investment guru (Nick) with the blessings of an industry veteran (Casey). In the presentation, Nick discusses the impact of consolidating the market saying that it is dangerous and could create a financial depression. He also proposes ways of forestalling this if it were to happen.

You don’t have to agree with what Nick is proposing or his approach for that matter. However, that doesn’t mean that his presentation is illegitimate.

As much as Nick looks ahead into the future, the main reason he did the Casey Research’s Covert-23 presentation was to promote The Casey Report. It is a newsletter that focuses on bold market predictions and how to prepare for them. Coincidentally (or not), most of the predictions are usually negative and the newsletter mostly recommends safe haven assets like Gold and cryptocurrencies.

Concerning the group of 23 entities that Nick says are controlling the economy, it is highly unlikely that we are about to go into a depression as they unravel. In fact, the markets seem to be going the opposite direction and the vaccine may be behind that. Gold and cryptos look like good investments for now. That being said, do not make any rushed decisions out of fear because most of what Nick talks about is pure speculation.