Have you heard about a presentation by Casey Research’s Nick Giambruno called The #1 “Lateral IPO” of 2021?

In the presentation, Nick talks about investing in private companies before they do an IPO and he refers to this move as investing in “Lateral IPOs.” He claims that it is a lucrative way of trading and he has identified one pick that will do well.

In this article, I walk you through the presentation and give you an overview of what Nick was talking about. By the end of it, you will understand what’s going on here and come to your conclusion.

In the video, Nick Giambruno tells us that the bulk of the profits in the market usually go to investors who stake a claim in good startups before they go public.

This is not a new sentiment as we’ve seen other gurus talk about investing in private companies. For example, Jeff Brown urges his followers to invest indirectly through SPACs through his Blank Check Speculator newsletter and Dave Forest urges us to invest in warrants in his presentation titled Warren Buffett’s #1 Private Investment. 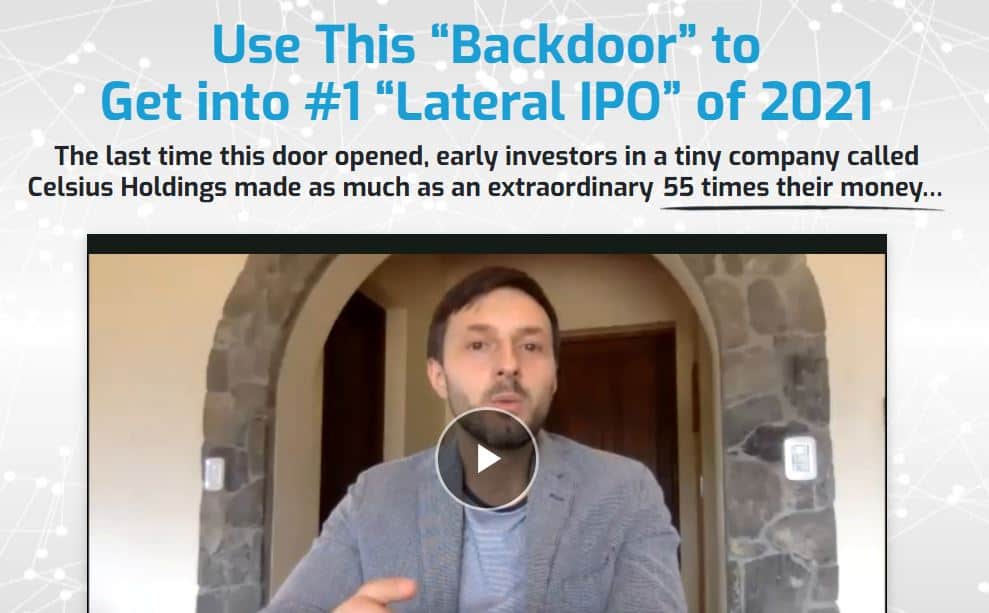 Going back to Nick’s presentation, he claims that investing in Hive Blockchain helped him make as massive a gain as 13,051% when he decided to pick up shares of HIVE before its IPO. It has been one of the largest trades of his career.

The idea is when you can get into a company before it debuts on a larger public exchange, you can make a fortune. There are several other examples of it, like Cryoport going up 10,245%, Oncolytics Biotech up 1,416%, New Age Inc. earning 4,443% profits, and so on.

The only problem with this approach is that it’s not that easy to find good private deals.

However, there is a backdoor that Nick has identified that he is calling a “Lateral IPO.” He says that it gives you exposure to the best parts of an IPO with early access for bigger gains.

Initially, I thought he was referring to a Special Purpose Acquisition Company (SPAC) (or blank check company) but after going through the presentation a few times, I am not certain because he may just be talking about investing in private companies.

Who is Nick Giambruno?

Nick Giambruno has been working with Doug Casey’s as his globetrotting colleague, which means that he travels around the world looking for investment opportunities.

Nick is the Chief Analyst of Casey Research’s flagship advisory, The Casey Report. He is knowledgeable in various fields, including geopolitics, the global cannabis market, value investing in crisis markets, second passports, international banking, surviving a financial collapse, and more.

He is also a speaker and has featured at investment conferences across the world. He has visited various parts of the Middle East and Europe to seek potentially life-changing financial opportunities for his subscribers.

Nick Giambruno has identified one small Israeli company that is in the cannabis business. He tells us that the marijuana industry in Israel has been booming and he has found one company to back.

He has written a special report about it called The Lateral IPO: A Secret “Backdoor” Into the #1 IPO of 2021. This report reveals all the details about the company.

In the presentation, he gives a few clues about it:

The company that matches these clues is Univo Pharmaceuticals LTD (TLV: UNVO). It is a vertically integrated medical cannabis company because it covers marijuana cultivation, processing, and distribution. It has former Israeli Prime Minister Ehud Olmert as its advisor.

To get that report from Nick for free, you have to sign up for his newsletter called Crisis Investing.

What you get when you join Crisis Investing

In addition to that report about Univo, you also get two other reports:

In addition to those reports, there are other perks of being a member, including receiving a new issue of the newsletter every fourth Tuesday of the month, each with his newest recommendation with the potential for quick, explosive moves, private access to the Crisis Investing profits research library, and access to the dedicated Crisis Investing customer support service.

Subscription Price: It will cost you $1,795/year and there are no refunds.

Pros of the Lateral IPO presentation

Is the Lateral IPO pitch legit?

Lateral IPO is a legit presentation. Nick uses it to talk about unique IPO investment opportunities that he refers to as special “backdoor” IPOs. He also uses it to market his newsletter, Crisis Investing.

There is nothing illegitimate about that and, in fact, this is not the first time I am encountering Nick’s work. I did a review of his presentation about The Switch and I still concluded it was legit.

This does not mean that his recommendation is guaranteed to do well, though.

Verdict on the Lateral IPO pitch

Nick Giambruno thinks that The #1 “Lateral IPO” of 2021 is a company called Univo Pharmaceutical. It is an Israeli cannabis company that has international operations as well as domestic (within Israel). Part of why he thinks it will do well is that he expects it to benefit from its connections with former Premier Ehud Olmert.

To be fair to Nick, Univo has been making strategic moves that may help its cause. For example, it has partnered with Canopy Growth and it intends to dual list in two major exchanges (NASDAQ and NYSE) through a SPAC acquisition — this is why I thought he meant SPAC when he talks about “lateral IPO.”

As of writing this, no deal has happened and you’ll have to check that out if you read this.

Before you jump into any investment, do more research to ensure that it matches your individual aspirations and strategy.