Welcome to my review of George Gilder’s presentation about The 5G Killer.

In the presentation, he talks about a technology that he thinks will make 5G obsolete even before it reaches mass adoption and seal the fate of AT&T, Verizon, T Mobile, and other big telecoms. In the meantime, it will make some stocks soar.

In this article, we find out what technology he is referring to as well as learn more about  the details of his offer.

George Gilder did The 5G Killer presentation to advertise his newsletter, The George Gilder Report, and talk about a new development in the telecommunications sector that he thinks will be an impediment to the 5G rollout.

Before we go any further, note that a few months back, he did the opposite and touted 5G as an important technology in a presentation where he teased “15G Stocks” (companies that would earn three times the returns of the typical 5G stocks). 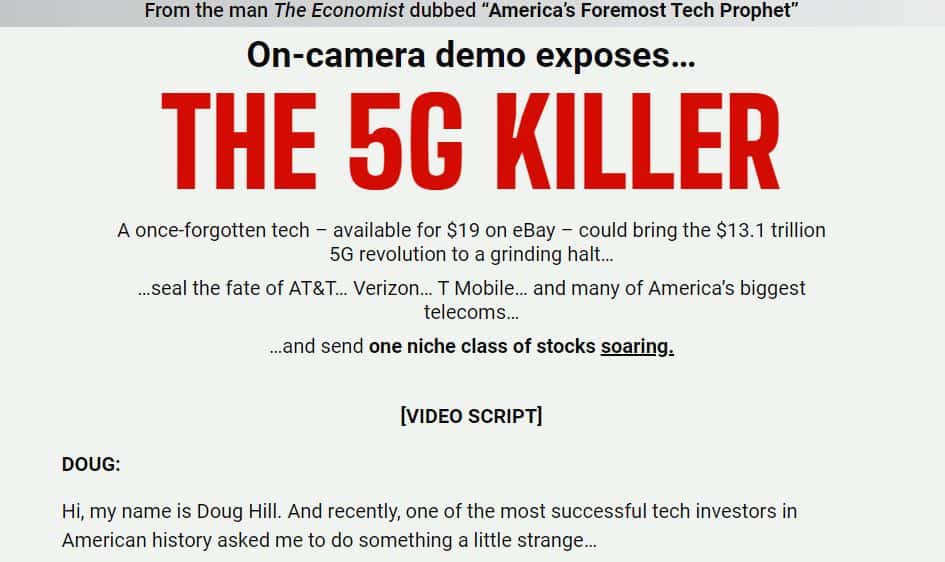 It’s all got to do with an “unlicensed” band of the electromagnetic spectrum that doesn’t get auctioned by the FCC that people and businesses can use for free.

The FCC normally auctions part of the spectrum to telecoms for vast amounts of money. For example, the agency recently held an auction for 5G that pitted the biggest telecommunication companies with billions of dollars at stake.

But Gilder says that the band that is unlicensed generates more business than the licensed band. This is the band that’s used by CB radios (like the one he does a quick demonstration with at the beginning of the presentation). It is also used for Bluetooth and Wi-Fi, two innovations that he credits for the rise of many big tech companies.

He says that the unlicensed spectrum can be traced back to a directive that was issued by the FCC in 1985 called Docket 81-413. It allowed private enterprises to use 2.4GHz of the radio wave spectrum as open source. This is not the first time Gilder is talking about this, he did another presentation titled Donald Trump’s Secret $15.1 Trillion Legacy a few months ago where he talked about it.

He says that the FCC recently issued another directive called Docket 18-295 that released 6Hz of the unlicensed electromagnetic spectrum to be used open source. With the new band available, he says that it will be another opportunity to make money if you missed out on the first directive in 1985.

The 6Hz will facilitate faster internet connections courtesy of a more efficient Wi-Fi band that will allow more devices to share a connection. He says that soon, you will see new routers that are “Wi-Fi 6E enabled” everywhere and they will provide faster internet than 5G hence his belief that 5G is in danger.

Companies that will benefit from The 5G Killer trend

He has found three companies that he expects to benefit from the 6Hz unlicensed band.

The first one manufactures the computer chips that are required to tap into the unlicensed band. He says that these chips may already be inside new Wi-Fi 6E routers by now. This company already supplies high-end computer chips to some of the biggest tech companies in the world.

The second company could be crucial to bringing the new technology to the masses. It already supplies up to 58 million homes in America and it is expanding its network at an exponential rate (doubling every 18-24 months).

The third company made a smart acquisition and now supplies nine of the world’s top ten global internet operators and the top six internet content providers.

He has written about them in a report called Three Spectrum Millionaire-Makers. You can get your hands on the report if you sign up for his newsletter.

After researching the clues he gave, I have potential companies that could be the ones he is referring to. That first company could be Qualcomm (QCOM) or Broadcom (AVGO) and the second one could be Comcast (CMCSA). The third one was hard to spot because the clues don’t work well.

Who is George Gilder?

George Glider considers himself one of the most successful tech analysts in American history. He has been in the industry for decades and during that time, he has been making predictions concerning the technology industry.

Glider’s work has been featured on many renowned platforms as well being appreciated by famous people like Bill Gates, Steve Forbes, and former Google CEO Eric Schmidt. He was also held in high regard by President Reagan due to his bestselling 1981 book, Wealth and Poverty, that advocated for supply-side economics and capitalism when Reagan was assuming the presidency.

He now publishes his work via Three Founders Publishing, a boutique investment research firm started by three of the most recognizable names in the newsletter publishing world — Doug Hill, Addison Wiggin, and Bill Bonner.

As I mentioned earlier, Gilder wrote a report called Three Spectrum Millionaire Makers that he is handing out to people who sign up for The George Gilder Report.

When you sign up for the newsletter, you will receive a free hardback copy of his book, Life After Google and an extra chapter of the book called Life After Google: The Missing Chapter. In the book, he talks about emerging tech that could destroy many of today’s companies.

In addition to the book, you get regular investment recommendations from George as well as a host of bonuses that include…

Is The 5G Killer a Legit Presentation?

The 5G Killer is a legitimate presentation by George Gilder.

First, George Gilder is a veteran investment analyst and author who’s been active for many decades. He has been making predictions about the tech industry and has gotten some of them right and some of them wrong.

Second, he is right about the FCC opening up the unlicensed 6Hz frequency, which it did in April 2020. The companies he teases are making products that use the 6Hz band so he is also not far off in his belief that they could benefit from the trend.

In the presentation, George Gilder suggests that the opening up of the 6Hz unlicensed band to Wi-Fi and other unlicensed uses will spell doom on 5G before it even takes off. But I don’t think that will be the case because those two are not interchangeable.

Sure, the 6Hz band may create opportunities for investment that will be lucrative, but we will still need 5G to shift data over long distances. Therefore, 5G and the unlicensed band will work in tandem.

That shouldn’t invalidate Gilder’s whole argument because we still need Wi-Fi 6E routers and the companies that make them will definitely benefit from the heightened business volume.