Welcome to my review of Louis Navellier’s Investment of The Decade.

It is a presentation by Navellier about what he considers as the #1 tech investment of the decade. According to him, Amazon, Google, and Facebook are racing to get in on a new tech that has kick-started a $150 trillion investment opportunity.

In this review, you will find out what technology he is referring to and how Louis is proposing you take advantage of it.

Introduction to Louis Navellier’s Investment of The Decade

Louis Navellier claims that there is a technology that has created a $150 trillion investment opportunity that you can get in on for less than $10 a share. This is what he regards as the #1 tech investment of the decade. 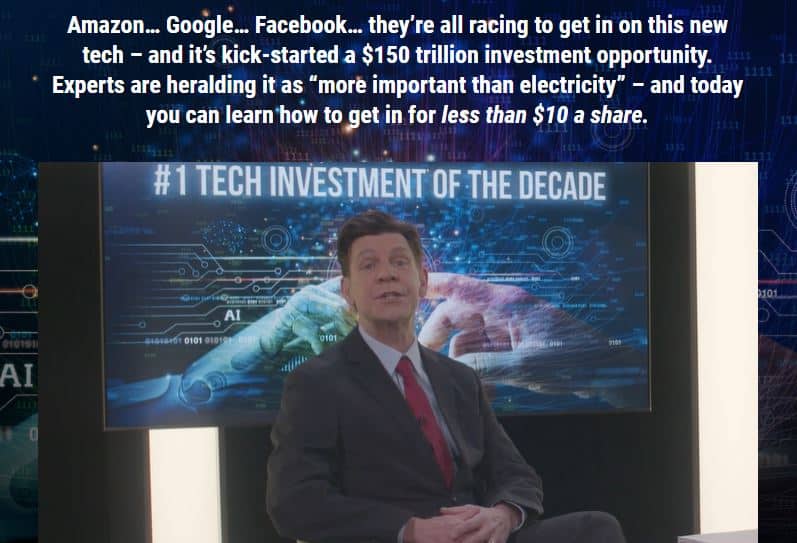 What technology is he talking about?

Louis is referring to Artificial Intelligence (AI). In the presentation, he waxes lyrical over it, saying that it could be bigger than the personal computer, the smartphone, and even the internet. He even thinks it could spark a fourth industrial revolution.

He says that now is the ideal time to invest in AI-based plays because computer technology has evolved over the past few years thus facilitating more complex uses. He believes that with better computers, AI is likely to progress faster thus creating investment opportunities.

Although big tech companies like Amazon, Google, and Facebook have invested heavily in AI, he doesn’t want you to invest in them because they are not going to earn you big gains. He wants you to focus on “hypergrowth sectors” that comprise smaller companies that may grow by a greater margin. He has his sights set on self-driving cars.

He says that the best way to invest in AI is to find a technology that will be crucial to all industries working with it, a pick-and-shovel play. In the presentation, he recommends NVIDIA (NVDA) because it makes computer chips that are used to run AI — thereby making it a backbone of the AI market.

But it is not his ideal pick because it is a big company already. He is interested in smaller, lesser-known companies that are involved with AI.

The #1 Tech Investment of the Decade

His first choice pick is a company that trades for less than $10 per share (as he was doing the presentation). It manufactures the smart chips in a car’s power train and driver assistance and safety systems. In addition to making computer chips, it has released a new technology suite that is designed for autonomous vehicle manufacturers.

On top of that, he has identified two others:

Details regarding those three companies are in a special report called 3 Stocks Powering the $150 Trillion AI Boom. You can get a free copy of it when you sign up for Navellier’s Growth Investor newsletter.

Louis Navellier is one of Wall Street’s renowned growth investors who provides investment advice to tens of thousands of investors. He has been in the financial services industry for more than three decades.

Louis has earned a reputation of being a savvy stock picker as well as a portfolio manager. One of the main aspects of his investment approach is uncovering Wall Street’s inconsistencies to help investors beat the market with less risk in the market’s best growth stocks.

He has appeared on various reputed platforms including CNBC and Fox Business News. Louis Navellier has also been quoted by MarketWatch, Bloomberg, and The Wall Street Journal.

He edits newsletters at InvestorPlace. Some of his publications include Accelerated Profits, Growth Investor, and Breakthrough Stocks.

How to access Louis Navellier’s Investment of The Decade

Louis Navellier’s Investment of The Decade presentation basically promotes his Growth Investor newsletter. As I mentioned earlier, you get a free copy of the special report, 3 Stocks Powering the $150 Trillion AI Boom, when you become a subscriber. Navellier has other special reports he wants to send for free if you sign up for his newsletter. In the presentation, he mentions two others:

All those recommendations are in keeping with the theme of this presentation that focuses on investments that will benefit from AI.

Other benefits of subscribing to Growth Investor are:

Is Louis Navellier’s Investment of The Decade Legit?

Louis Navellier’s Investment of The Decade is a legit presentation. Navellier is a genuine investment analyst with over 30 years’ experience in finance. Therefore, the presentation is legit.

Besides, he makes sense when he says that AI is about to develop even further because we have better computers. As this happens, we will see AI getting more complex use cases than we have seen so far — make no mistake, AI is already ubiquitous in our lives in its current form.

Louis Navellier’s Investment of the Decade is a presentation that was published to promote the Growth Investor newsletter.

Whether or not you agree with Louis’ recommendations, he makes some valid points. That doesn’t mean that you should subscribe to his newsletter (that depends on whether you find his approach palatable enough to pay $49 on a subscription).

For example, his assertion that all tech companies that have grown from small startups to giant corporations were behind transformative technologies makes sense. All startups that succeed must have an x-factor about them to beat the competition. The trick is to find them in a market that is saturated where the chances of a startup failing are higher than chances of succeeding.