Welcome to my review of Jeff Brown Biotech Profits.

Brownstone Research, Jeff Brown’s publishing firm, recently released a presentation he did where he was talking about a move by the FDA that may make investing in biotech companies a lucrative proposition.

After watching the video and researching the matter, I decided to write this article where I highlight the main talking points of the presentation if you haven’t watched it but would like to know what Jeff was talking about.

It also mentions a controversial move by the FDA that can potentially unleash $1.2 trillion into the biotechnology sector with one company primed for the huge cash injection. 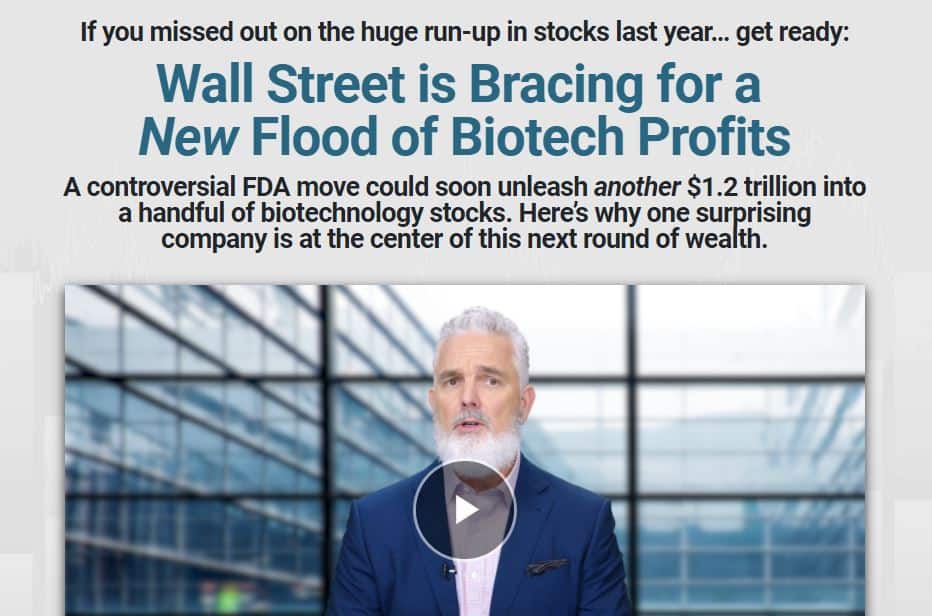 In the video, Jeff tells us that last year (2020), there was a huge run-up in biotech stocks and investors who took him seriously made a lot of money.

It is hard to argue with that because in 2020, there was massive interest in the biotechnology industry and the sector went up so fast that at one point they beat FAANG stocks as a better investment alternative for investors.

But he insists that all is not lost because even those who missed out on the rally last year can still make money if they follow his advice in 2021.

He also makes it clear that the companies that he wants us to focus on have nothing to do with the coronavirus.

Circling back to the FDA move, what is he talking about?

Jeff says that the agency rewards companies that develop therapies for a special category of diseases called orphan diseases. He says that the drugs they sell account for less than 8% of the market share.

If you are unfamiliar with them, orphan diseases are rare diseases caused by genetic disorders. They only affect a small percentage of the population and due to this, they do not get as much attention or investment within the healthcare industry as other more common disease.

To encourage biotech companies to develop drugs for these diseases, the FDA created the Orphan Drug Designation in 1983 that stipulates that companies that develop drugs to tackle them will be rewarded with market exclusivity for eight years. This means that such companies will be given a virtual monopoly in the market for that period.

And this is where the discussion segues to one company that Jeff is encouraging people to invest in. More on it after we’ve taken a closer look at Jeff’s background.

Who Is Jeff Brown?

Jeff Brown is an experienced investment guru who has years of experience in the technology sector and now in finance.

Jeff earned a Bachelor of Science degree in Aeronautical and Astronautical Engineering from Purdue University and later obtained a master’s degree in corporate finance from the London Business School.

His involvement in the tech industry has lasted more than 25 years and a significant portion of that has been him serving as a high technology executive. For instance, he has worked for companies like Juniper Networks, Qualcomm, and NXP Semiconductors.

Nowadays, he publishes newsletters via Brownstone Research, a firm that is affiliated with Bill Bonner.

He edits premium newsletters like Early Stage Trader, Exponential Tech Investor, and the Near Future Report. He also has a popular free e-letter called The Bleeding Edge.

Most of what he writes about in those newsletters is investment opportunities in the tech and biotech industry with a focus on startups.

How to make money off of Jeff Brown Biotech Profits

As I mentioned before, Jeff has identified one biotech company that he wants his audience to consider investing in.

He says that it has been working on a genetic therapy-based drug that is awaiting the approval of the FDA. He tells us that this is not the first time that it is working on such a drug as it already has six FDA-approved genetic drugs in the market.

He insists that it is a big deal because according to medical experts acknowledge that manufacturing capacity shortages are a problem.

He has written about the company in a report called The Next King of Biotech: Unlocking the Genetic Therapy Revolution.

You can get this special report for free only when you sign up for The Near Future Report. It is an investment research service through which Jeff releases investment recommendations that benefit from massive trends. His mission is to profit off of breakthrough technologies that are on the verge of mass adoption.

Here’s the list of benefits that you will get once you subscribe to The Near Future Report.

There is a 60-day money-back guarantee.

Jeff Brown Biotech Profits is a legit presentation that alerts us to a type of therapies that doesn’t get enough attention — drugs targeting orphan diseases. Although they are not as glamorous as other types of therapies — and in fact only command 8% of the market share — they impact millions of people.

The Orphan drug designation by the FDA that Jeff is talking about is also true and you can read more here. However, the $1.2 trillion figure he keeps mentioning is merely an estimate of the amount of money the biotech companies will make in the next five years. Therefore, you should treat it as that and not “money that will be pumped into the industry by the federal agency.”

Jeff Brown Biotech Profits is a presentation meant to promote the Near Future Report, an investment research service edited by Jeff.

He also teases a biotech company working on a genetic therapy (as well as its delivery system) that he expects to do well on the back of the FDA move we discussed.

Although he comes across as quite confident that this will happen, you should not make an investment before doing more research into it. Unfortunately, we could not reveal the name of the company here because there aren’t enough clues to make a call. Should you learn what its name is, do not invest money that you are not prepared to lose.