“Neural Remapping” is the title of a new pitch by James Altucher where he talks about a new breakthrough treatment for diseases like Alzheimer’s and PTSD, just to name a few.

He claims that this new treatment will disrupt the industry and create exciting and lucrative investment opportunities for investors.

He has singled out one tiny company that he expects to do well when the breakthrough treatment goes to market.

In this review we will take a closer look at everything of importance that James Altucher mentioned in his presentation.

Neural Remapping is a presentation by James Altucher where he talks about a brand new medical technology that he thinks is so powerful that it can treat several mental diseases that current therapies are struggling with.

He says that there is a strange strip that one company has developed that dissolves under the tongue. This strip cures a wide range of diseases. He believes that it will give $47.7 million Americans a new lease of life. 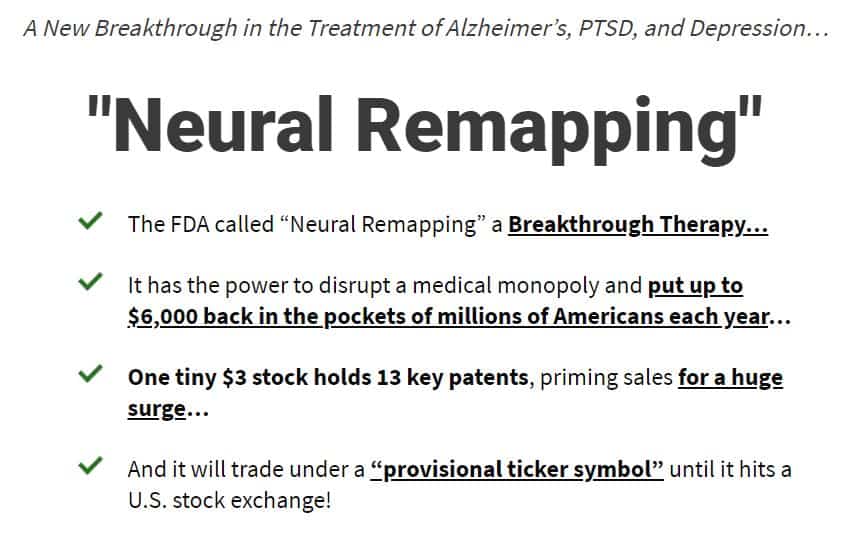 This medical breakthrough will cure the following conditions:

The way it does it is by disrupting the harmful brain connections and feedback loops created by those diseases. In doing so, it mitigates the damaging effects of those diseases and enables the patient to recover.

It has already garnered the attention of the biotech industry and famous institutions like Mt. Sinai, Yale, and John Hopkins have even dedicated entire departments to its research.

James says that even the FDA has given it a “Breakthrough Therapy” designation. Note that the FDA gives this designation to drugs that are likely to be a big improvement on the current drugs treating a certain disease.

So, what is this medical breakthrough that James Altucher is so excited about?

He is talking about psychedelics.

Psychedelics are psychoactive substances that cause changes in perception, mood and cognitive processes. They are also being used extensively as experimental cures for some of the conditions we have been mentioning so far.

Since psychedelics is an entire class of drugs, which specific psychedelic substance is James Altucher talking about?

He is referring to psilocybin, an active ingredient in magic mushrooms.

James Altucher claims that the use of psychedelics in the medical field will be the most exciting trend of the 21st century, especially in the biotech sector. To be precise, Neural Remapping will literally rejuvenate the human brain.

Before the trend catches on and leads to game-changing gains in the biotech industry, he says that you can be a part of it.

According to James Altucher, the way to profit from this new trend is invest in a little-known Canada-based company at the forefront of the “Neural Remapping” revolution because he projects that its stock price can witness over 200x growth. He believes that it is positioned to be the best biotech play of the decade.

Why is he fixated on the tiny company?

First, he says that it is likely to increase its annual revenue from $1 million in 2021 to a quarter billion dollars in 2027 driven by the sales of its drug.

Its leadership and scientific teams comprise dozens of heavy hitters in the biotech industry. They have spearheaded billions in pharmaceutical sales at big pharmaceutical companies and overseen over 60 new drug investigations. They also played a part in developing Allegra, an allergy medication.

The company has the only scientific team to have brought a psychedelic drug to market in the past.

The company has discovered 50 proprietary therapeutic molecules and has over 20 pre-clinical trials running. It has filed 13 patents in 153 countries for various medicinal compounds and new ways to deliver the treatments (including the strip that dissolves under the tongue).

The company has $64 million in the bank to fund its research and testing.

As he was making the presentation, it was not trading on a major US exchange but was trading publicly at $3 in an OTC market.

He wrote a report about the company called The ‘Neural Remapping’ Prospectus: How to Hit it Big With Psychedelic Medicine. 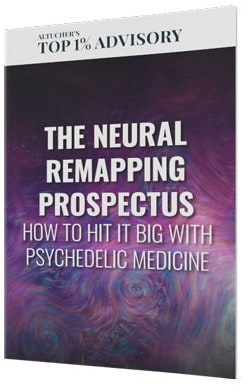 In it, he has shared details about the tiny company for those who would like to invest in it. On top of that, he has also written about two early-stage biotech companies on his watch-list that are also involved with psychedelics.

You can get the special report for free if you subscribe to Altucher’s newsletter, Top 1% Advisory. We will be getting into it later on…

Who is James Altucher?

James Altucher is an American writer, chess master, entrepreneur, and venture capitalist. He is the author of best-selling books and investment newsletters such as Altucher Confidential, Altucher’s Weekly AlphaBrain Alert, Altucher Alliance, and Altucher’s Investment Network.

These are published by an independent financial research firm called Three Founders Publishing.

James runs two podcasts: The James Altucher Show, where he brings on guests and Ask Altucher where he answers questions from the audience.

He has been an entrepreneur since the early days of the internet. In the course of his career, James Altucher has built up a base of rich and powerful contacts spanning multiple industries.

He finds opportunities in all kinds of industries and this time, he is confident about biotech. According to him, biotech breakthroughs can create a meaningful impact in the world by improving people’s quality of life. At the same time, investors can use them to build their personal retirement portfolios.

What is James Altucher’s Top 1% Advisory?

As I mentioned earlier, to learn more about the biotech company that James thinks is leading the neural remapping trend, you have to sign up to Top 1% Advisory.

When you join this advisory service, James will be sharing insights about fast-moving opportunities he finds out about from his network of hedge fund managers, billionaires, scientists, and venture capitalists. That’s why he calls it “Top 1% Advisory.”

Once you become a member, you will receive the following benefits…

You are also entitled to two bonus reports, namely The Big Data Bet: To $1 Trillion and Beyond and Top Lessons I’ve Learned From Investing Legends.

You will also gain access to a few daily e-letters, including Altucher Confidential, The 5 Min. Forecast, and One Last Thing.

What is the Top 1% Advisory Subscription Fee?

Note that the subscription fee is NON-REFUNDABLE.

However, if you wish to cancel your membership, you have to do so within 90 days by calling customer service. They will then allow you to divert that money to any other publication offered by the Three Founders Publishing.

I think “Neural Remapping” is a legit presentation.

The presentation is legit because what James Altucher is talking about here is not far-fetched. The FDA has been actively taking measures to speed up the process of researching and approving psilocybin, a psychedelic found in magic mushrooms, for the treatment of depression.

It recently granted the “breakthrough therapy” designation to the psychedelic and it is currently undergoing clinical trials. Typically, this designation is granted to a drug when there is evidence that it could be an enormous improvement on the available therapies.

What this shows is that what James Altucher is telling us in the presentation concerning psychedelics is not beyond the pale.

However, his predictions about the tiny Canadian company are subjective because the stock market is unpredictable.

The “Neural Remapping” presentation is about what James Altucher considers as one of the biggest profit-making biotech investment opportunities.

Since James Altucher is one of the most experienced investment analysts at his firm with years of experience you are tempted to follow his investment advice. However, the subscription cost is a bit on the higher side i.e. it will cost you $2000.

If you can afford that kind of money and think that James Altucher is making a lot of sense, no one should stop you from following his advice. The decision ultimately rests with you.